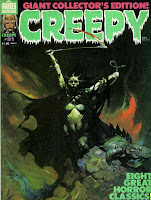 This is an all reprint issue of Creepy, dated August 1977. The cover is a reprint of Frank Frazetta's cover for Vampirella 11. Many very good stories are reprinted here.

First is "Nightfall" by Berni Wrightson (art) and Bill Dubay (story), from Eerie 60. A young boy is deathly afraid of monsters who live in his room that come out whenever his parents leave him there alone. Each time they turn out the lights and leave the monsters come and try to take him away. His parents don't believe him but eventually decide to let him sleep with them after his bed is nearly taken out of the window.

Second is "Creeps" by John Severin & Wally Wood (art) and Archie Goodwin (story), from Creepy 78. This story features an accountant who is bugged by homeless people and the more destitute in society, calling them "Creeps". Eventually it becomes an obsession to him and he starts killing them. It goes even further when he thinks his mother is a creep herself and kills her. Only this time someone sees it, so he has to flee and hide on the streets. As the days go by he takes on the appearance of a homeless person himself, then ends up killing himself when he sees his reflection. Very good story from Goodwin and an interesting art job from Wood and Severin.

Third is "Phantom of Pleasure Island" by Alex Toth (art) and Gerry Boudreau (story), from Creepy 75. This story is a murder mystery taking place in an amusement park where a mysterious sniper has killed multiple people. One of the suspects is killed while the other one agrees to sell his rival amusement park, removing him as a suspect. The killer ends up being the wife of the park owner, who wanted him to pay more attention to her than the park, and thought that her murder spree would accomplish that goal.

Fourth is "Benjamin Jones and the Imagineers" by Luis Bermejo (art) and Budd Lewis (story). This story, from Creepy 80, is about a boy whose toy soldiers can summon monsters. Naturally his mother doesn't believe him, until she is confronted by one of them and is killed by it. Weakest story here, but only because the other material is so strong.

Fifth is "Cold Cuts" by Jeff Jones (art) and Berni Wrightson (story), from Vampirella 34. Terrific contributions from these two, with Wrightson providing his only writing credit for a story he didn't draw as well. The story features a man in a winter wilderness who shoots a deer and carries it with him. Meanwhile his wife is snowbound in a cabin with a colleague of his who attacks her. While the hunter thinks about providing for his wife, the colleague's body is mutilated, as if he was being prepared to eat.

Sixth is "Thrillkill" by Neal Adams (art) and Jim Stenstrum (story), from Creepy 75. A truly great story, and arguably the most famous Warren story of all time, being ranked #1 overall as best Warren story in the Warren Companion. A young man with a sniper rifle shoots random people from the top of a building and is eventually killed by the police. While the artwork shows these events taking place a priest who knew the young man as a boy talks to a reporter, trying to explain why this happened.

Seventh is "Gamal and the Cockatrice" by Auraleon (art) and Bruce Bezaire (story), from Vampirella 47. A terrific story, one of the best of all time. It is included within the top 25 stories in the Warren companion. A tribe in the dessert is told by one of their members, Gamal, that he has killed the cockatrice, the half chicken/half snake creature that kills anyone who looks at it. Using a complex story he tells them how he killed it. When the man offering a reward for the death of the creature refuses to pay, Gamal admits that he also kidnapped another cockatrice and that he will unleash it unless they give him a third of the tribe's wealth and three of their women. They relent to his demands, and it is never really revealed whether he actually killed or captured a cockatrice.

Last is "The Shadow of the Axe!" by Russ Heath (art) and Dave Sim (story), from Creepy 79. This story was Sim's sole Warren appearance. It features a boy living in a small town who suspects his father is an axe murderer. To stop him, he turns on his father and kills him with an axe. The next day, his mother winks at him, making one wonder if she was responsible for it all.
Posted by Quiddity at 9:22 AM