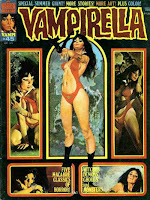 The cover aside, this is a tremendous issue of Vampirella, my pick for the overall best issue of the magazine ever produced. Cover dated September 1975, the cover is a montage of various covers including Enrich's covers for issues 17, 29 and 40, Sanjulian's cover for issue 38, Jose Gonzalez's cover for issue 19 and the background from Frank Frazetta's cover of Creepy 7. Extremely attractive artwork, and strong stories from all concerned make this a must have issue.

First is Vampirella in "Blood Wager" by Gonzalo Mayo (art) and Len Wein (story). This was Mayo's first story on Vampirella and probably the best art job he ever did for the character. This story takes place in a dream of Pendragon's as he lays in a hospital bed, dying of gunshot wounds (a single panel of him by the artis Zesar, from the next issue is included here). Vampirella and Adam have a fight, causing him to go back to an old lover, who brings him to a casino on an island called Lemondo. Conrad and Pendragon meanwhile think a friend of theirs has a cure for Vampirella's bloodlust, and they head to the same island. In actuality, the friend and the head of the casino are agents of Chaos. Vampirella and Adam's former lover are able to defeat them.

Second is "The Parable of the Hermits of Glastonbury Tor" by Ramon Torrents (art) and Gerry Boudreau (story). Bertrand, a scholar, comes to the town of Glastonbury. He heads to the Hermit's Abbey where he meets a beautiful woman to whom he makes love. The woman tells him she is life, and introduces him to the seven hermits of Glastonbury Tor. She tells him that he'll be given eternal life, that others who have come eventually chose death, but he can avoid that by choosing to marry her and always remaining faithful to her. He gladly does so, and the hermits also give him a gift of whatever he wants, so he tells them that no matter what they can never inflict death upon him. The years go by. He is happy for a while, but eventually becomes bored and leaves the abbey to sleep with women from the outside world. While his wife cannot kill him due to the deal with the hermits, she does cause him to fade from existence entirely.

Third is "Janis!" by Luis Garcia (art) and Victor Mora & Budd Lewis (story). This story appears in color, although the colorist is uncredited. Like many stories done by Garcia during this time period, this story was originally printed in Europe and appears as a reprint here. This story possesses in my opinion the most beautiful artwork to ever appear in a Warren magazine. A man comes across a statue of a beautiful woman in a Greek harbor. The woman, named Janis, vanished into the sea ten years ago. He sits down to play the guitar, and suddenly she appears. Janis brings her with him into the depths of the sea. All is alright at first until two humanoid monsters appear and carry him off with them.

Fourth is "A Hero Made of Wishes" by Esteban Maroto (art) and Gerry Boudreau (story). A kingdom is treated harshly by their lord, Cervantes. One of the townfolk, Chaucer, talks to the priest of the town, saying that they should summon a champion using the book of Asmodeus, which the priest believes to be evil. Later, when Chaucer's lover and the priest's niece is taken captive by Cervantes, the priest agrees to the plan. The townfolk summon their champion, a powerful looking knight who acts based on the will of the people. Their will to topple Cervantes causes the champion to charge towards Cervantes' castle and kill him and all his men. The townfolk are pleased, but when they start thinking about who will now be leader, their greed to be leader causes the champion to kill them all.

Fifth is "The Winter of Their Discontent" by Isidro Mones (art) and Gerry Boudreau (story). This story is heavily influenced by the story "The Wolves at War's End" from issue 43. An english soldier returns home from the war against Holland in the 1600's to find his hometown heavily in ruin, ravaged by the plague. Being told that his parents have died from the plague, he searches for his sister, but finds her among a pile of corpses being buried by the side of the road. He returns to the town to look for his lover and finds her family being blamed for the plague, with her father being thrown on a fire by a mob. After they escape, she tells him there is nothing worth living for and that he should kill her. He does so, then kills himself.

Last is "There Are No Children in Hungry Hollow, Tennessee" by Jose Ortiz (art) and Gerry Boudreau (story). A man comes to the town of the title to write a book. He finds it quite odd that there are no children whatsoever in the town. Everyone he talks to tells him that they are sent away, but their stories contradict one another, causing him to suspect something. He changes his plans to instead write his book about the town, but when he tries to mail it out, the town postman, who inspects all the mail stops it from going out. He is confronted by him, the local store owner and the boarding house host who reveal to him that the town reverted to cannibalism afer the war. After revealing this secret, they make him their next meal.
Posted by Quiddity at 3:59 PM