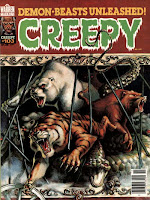 First is "Angel of Doom!" by Jeff Jones (art) and Goodwin (story), from Creepy 16. This story features Thane the barbarian, a recurring character throughout the years in Creepy. In this story Thane is part of a tribe that continously makes sacrifices to a monster. When his lover is killed, Thane heads out, ignoring the tribe's warnings and battles the monster, a giant insect creature. He defeats the creature, but the tribe decides to continue making sacrifices anyway, so Thane leaves. The tribe is soon plagued by the monster's children and are all killed after Thane leaves.

Second is "Bookworm" with art by Richard Corben and story by Gerald Conway, from Eerie 32. A man goes to work as an apprentice to an elderly man with a large book collection. The elderly man tells him how he's studying the black arts. One night our hero discovers the old man dragging a corpse with him and follows him. The elderly man is in a crazed state and attacks him, but is killed by the apprentice. Suddenly a giant worm appears, who the elderly man had been finding food for, and forces the apprentice to start supplying him with food from now on.

Third is "On Little Cat Feet!" by Auraleon (art) and John Jacobson (story), from Vampirella 38. A witch, Kitty, lives in a rooming house with her artist friend Eulalia. Kitty is kicked out of the place by the landlady and plots revenge by turning into a cat and poisoning her claws. She kills the landlady's cat, taking its place, then kills the landlady as well soon after. Eulalia meanwhile recruits an actor as a model for her latest work, a statue of Nero. Kitty, still in her cat form, wanders by and Eulalia has the actor hold her in his arms. Eulalia reveals herself to be Medusa, and when she reveals herself ends up turning both the actor and Kitty into a statue.

Fourth is "Thumbs Down!" by Al Williamson (art) and Anne T. Murphy (story), from Creepy 6. This story features a crooked arena games master who has his top gladiator killed only for him to com e back from the dead to take revenge. This story would probably be reprinted by Warren over the years more than any other story.

Fifth is "Lucky Stiff" by Ramon Torrents (art) and Gerry Boudreau & Carl Wessler (story), from Vampirella 38. A very cautious man ignores a beautiful young woman who starts at the place where he works. At the end of the day she invites him to come to her home at the other side of town. The story shows what would happen if he went. He arrives there, only to be attacked by cats. She tells him he doesn't deserve to live and that he is going to be fed to him. The narrative then reveals that he actually didn't go there, as he was hit by a car along the way.

Last is "The Black Cat" by Berni Wrightson (story & art), from Creepy 62. This story is an adaption of the Edgar Allen Poe story. A man and his wife own a beloved black cat. Eventually the husband grows tired of the cat, then upset at it. After the cat bites him, he cuts out one of its eyes and soon after hangs it. That very night his house burns down. Wandering into a bar, he finds another black cat that has one eye that starts following him. He brings it home and the wife quickly becomes fond of it. The husband loses control and tries to kill the cat. When his wife gets in the way he kills her by slamming an axe into her head. He hides her beneath a brick wall and is confident that the police won't find it when they stop by. The cat however, which was also walled behind the brick wall ends up attracting them to her corpse due to its screams.
Posted by Quiddity at 4:23 PM