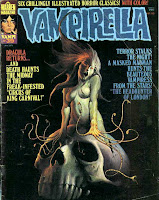 Ken Kelly provides the cover for this issue of Vampirella, featuring a freak woman sitting on a skull. This issue is cover dated January 1975. Jose Gonzalez provides both a one page Vampi intro on the inside front cover and a one page Vampi farewell on the inside back cover, an image that was soon reworked into the cover of Vampirella 42 by Enrich.

First is Vampirella in "The Head-Hunter of London" by Leopold Sanchez (art) and Mike Butterworth (story, as Flaxman Loew). This is the first of three straight Vampi stories from Sanchez, whose style is a stark contrast from Gonzalez's art. Still a pretty good job from Sanchez though. Vampi and Pendragon meet Jack D'Arcy, who offers to tour them around London. D'Arcy is a hunter, who secretly collects human heads as well and becomes obsessed with obtaining Vampirella's head. They struggle, and by the end it is D'Arcy who ends up being decapitated.

Second is "The Sultan of 42nd Street" by Felix Mas (art) and Carl Wessler & Gerry Boudreau (story). A poor artist buys a canvas from a pawnshop. It ends up that whatever he paints on the canvas comes to life, and a beautiful woman appears when he paints her on it. He gets the idea to paint multiple women and turn them into whores to make him money. Alas, when another painter buys one of the canvases and paints his face, his entire face vanishes from his home, and appears in hers!

Third is "Snow White and the Deadly Dwarfs" by Esteban Maroto (art) and Steve Skeates & Gerry Boudreau (story). A young woman lives in a large mansion all by herself, well except for dwarves that live with her and call her snow white. Her boyfriend doesn't believe her about them, and when he comes over they stab him to death to 'protect her'. Only it ends up that there dwarves weren't after all and she did it all the stabbing herself. Some extremely good art by Maroto on this story, one of his best.

Fourth is the start of a new three part series featuring Dracula. This first story is titled "The Circus of King Carnival". Art is by Esteban Maroto and story is by Gerry Boudreau. This story is in color. Despite being the title of the series, Dracula barely appears at all here. Instead the story focuses on a couple who come by a freak show that Dracula is a part of. The husband visits a shaman as he wants to save his dying wife, but the shaman tells him he'll have to bring him a human heart. The husband attacks a thief who is captivated by the butterfly lady in the freak show, and kills him to take the heart. Only the butterfly lady kills him. Meanwhile, Dracula bites the neck of the wife, preventing her from dying by turning her into a vampire.

Fifth is "The Curse of Castle Vlad!" by Auraleon (art) and Doug Moench (story). This story takes place in Translyania where a movie shoot takes place in a cursed castle. Soon members of the cast start appearing dead, but the director declares that they have to continue. Eventually all are gone except for the director and his wife, the star of the film, who ends up being revealed as a vampire. Naturally, she ends up biting him.

Last is "The French Coagulation" by Luis Bermejo (art) and Carl Wessler & Gerry Boudreau (story). Bermejo's first Warren story, his art here is simply amazing, arguably the best job he ever did for Warren. Its quite unfortunate that he couldn't stay this good his entire Warren career. In Paris law enforcement investigate the death of a woman at the hand of the "Loup Garou" which is essentially a werewolf. Due to a key in the victim's hands, they are able to pintpoint the creature down to one of six people. They lock them up in jail cells and the night of the full moon one of them, a woman, turns into the werewolf and kills her husband, who is in the cell with her. It ends up the husband was sleeping with the wife of one of the cops which is why he locked him in the cell with her.