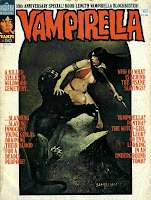 First is "Call Me Panther!" by Jose Gonzalez (art) and Bill Dubay (story). Vampirella, traveling through the graveyard, finds a dead body hanging from the tree, as well as a woman who transforms into a panther when she puts a stone necklace on. Vampirella manages to take the necklace off the woman, whom ends up getting kiled when she is struck by a train while running from Vampi.

Next is "The High-Gloss Egyptian Junk Peddler" by Esteban Maroto (art) and Bill Dubay (story). Conrad has visions of a demon like creature killing another woman in the graveyard. For now though our heroes ignore that and try to find the origin of the necklace, which is called the Khafra Stone. They visit an Egyptian expert, Nubia El Amarna, who tells them of the stone's origin. It belonged to Khafra, who appeared in Egypt during the reign of Khufu when a ship he was on crashed nearby. Khafra worked for the pharoah, then became pharoah himself after his death. Khafra had the ability to turn into a panther himself. That night Nubia transforms into a panther herself when she steals the necklace, but is stopped by Adam when he pulls the necklace off of her.

Third is "Granny Goose and the Baby Dealers" by Ramon Torrents (art) and Bill Dubay (story). Conrad and Pendragon investigate the events in the graveyard while Adam and Vampi head to New York to find Fleur, who they think can help them solve the mystery of the Khafra stone. Fleur also gets involved with Granny Goose, who is in charge of a group that deals with black market sales of kidnapped babies. Fleur reveals that Khafra was an alien and that there have been many panther people throughout time. She then shows them Khafra's last living descendent, who just happens to be Pantha!

Fourth is "The Final Star of Morning" by Bill Dubay & Jeff Jones (art) and Bill Dubay (story). Adam and Vampirella head to Egypt where Pantha has been kept in a cell by Russians who captured her after Pantha's previous appearance in issue 44. The Russians hope to copy the Khafra Stone and have a whole army of panthers to take over the world. However, Vampi wears the Khafra stone and Pantha turns into her Panther self, killing the Russians who have captured them. Pantha decides to head to her home planet and agrees to bring Vampirella to Drakulon along the way (this was before Panther realized that she too was from Drakulon), but Vampirella decides to stay on Earth with Adam.

Fifth is "The Thing in Denny Colt's Grave" by Jose Ortiz (art) and Bill Dubay (story). Pendragon and Conrad head to the graveyard, where they find a woman captured whom they save. While Conrad tends to her, Pendragon heads after the killer, who is nothing supernatural, but just a crazy guy named Elmiro Dungfoot. By causing an illusion of the Spirit, Pendragon captures him. The Spirit makes a cameo appearance in one of the last few panels.

Last is "Ground Round" by Auraleon (art) and Roger McKenzie (story), the sole non-Vampirella story of this issue. A butcher kills his wife and puts her body in the freezer, groundind up her body and selling it at the store. As a cover he says she's sick and that they'll be moving to Florida. When her nosy friend arrives, he has to kill her too and heads to the freezer, but gets locked in, with the remains of his wife, who takes revenge on him.