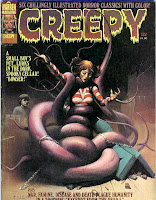 Ken Kelly provides the cover for this issue of Creepy, dated December 1974. This cover's quite the oddity, as the story it features, "Bowser", doesn't even appear in this issue due to a printing error. That story was planned to be printed here, but due to an error at the printer, the story "The Raven" appeared instead. "Bowser" would later appear in Vampirella 54 approximately two years later. Berni Wrightson provides the one page intro from Uncle Creepy on the inside front cover.

First is "Excerpts from the Year Five" by Jose Ortiz (art) and Budd Lewis (story). This story takes place in a future where all the power in the world has vanished. The story focuses on a man, who meets a woman when receiving first aid. They help fellow people and find a young boy eating the remains of his mother. Eventually Satan worshippers kill the boy however, and the woman dies soon afterwards as well.

Second is "The Haunted Abbey" by Vicente Alcazar (art) and Lewis (story). This story tells of a couple in Spain who comes across an abbey occupied by monks. Due to the weather they head inside. The monks tell them to stay in a cell, but they sneak out and catch them executing a woman by covering her up in an alcove with bricks. All of a sudden they find themselves years later, and all thats left of the woman is a skeleton. They head up through the Abbey to know find it completely in ruins.

Third is "The Happy Undertaker" by Martin Salvador (art) and Carl Wessler (story). This story tells of an Undertaker who loves his work and takes a lot of steps to make money for himself. He eventually replaces his employees with homeless kids who work for room and board. They end up turning on him however when it is revealed that they are vampires!

Fourth is "The Raven" by Richard Corben (story & art), an adaption of the classic Poe story. Anyone familiar with horror surely must know this story, featuring a pesty Raven that keeps saying "Nevermore". Some very nice art from Richard Corben. The story was most likely originally intended for two issues later, an all Edgar Allen Poe issue.

Fifth is "Holy War" by Adolfo Abellan (art) and Lewis (story). Taking place in the age of the Crusades, the Church learns of a group of pagans that apparentely possess the greatest treasure in the world. When they refuse to hand it over to be used for war, the church sends soldiers which kill them all. They then find the treasure... which ends up being the cross of Jesus Christ.

Last is "Oil of Dog", an adaption of the Ambrose Bierce story. Isidro Mones provides the art while Jack Butterworth provides the adaption. This story tells of a boy whose father creates oil from dead dogs and whose mother performs abortions and has him dispose of the body. One day when the boy is hiding from the cops he disposes of a baby in the oil vat and creates an even more lucrative product. Eventually however his parents get in trouble for all the people they end up killing to create the oil, and end up killing each other when there is no other person they can use for ingredients.
Posted by Quiddity at 4:24 AM