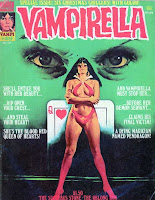 Enrich provides the cover for this issue of Vampirella, cover dated March 1976. While the cover states that six Christmas chillers are included inside, there's actually only one Christmas story within. A one page color intro of Vampi is drawn by both Jose Gonzalez and Ramon Torrents, appearing as if Torrents did the vast majority of work.

First is "The Blood Red Queen of Hearts" by Esteban Maroto (art) and Bill Dubay (story). Probably my favorite single Vampirella story in this magazine's history, although the Blood Red Queen would make many return appearances down the in later issues, each declining in quality. This story introduces the queen, who has slain six people, taking their hearts. With the acquisition of a seventh she believes she'll become the queen of Chaos. She summons a demon which she sends to take the final heart, from Vampirella. Vampi meanwhile returns to the hospital where Pendragon is kept and saves him by giving him a blood transfusion. The demon has hidden himself within Pendragon's body however, and attacks Vampi when the transfusion takes place. Adam meanwhile returns to the hospital, having been cleared due to Sara confessing to the attempted murder. Adam saves Vampirella and shoots out the demon's eyes, forcing it away. Vampirella is cleared of all charges, and Conrad is revealed to be alive, having been in hiding. Alas, the Queen does not have such a happy ending, with the demon tearing her eyes out to replace his. Some extremely good art by Maroto here in his first story featuring Vampirella herself (he'd do his second and last Vampi story in the next issue). The final page, showing the Queen's fate is particularly good.

Second is "The Thing in Jane's Closet" by Ramon Torrents (art) and Budd Lewis (story). A young woman, Jane, is deathly afraid of what is in her closet. Her mother doesn't see anything there, and sends her to a psychologist, then a sanitarium. She comes home, only to once again be horrified by whats in her closet. The psychologist thinks another personality of hers is whats responsible, but when her mother goes into the closet, whatever is in there kills her. The psychologist also ends up a victim to whatever's in the closet. Jane meanwhile leaves, and is has a normal life afterwards. Thankfully whatever is in the closet is never actually shown, keeping the story a scary one.

Third is "Then One Foggy Christmas Eve" by Joaquin Blazquez (art) and Gerry Boudreau (story). A man buys his kid a mysterious looking doll for Christmas that looks like a bizarre creature. Soon murders start occuring, and the man is attacked by the doll. It ends up that the doll is just one of many, all of whom are alive and plan to take over the Earth (referencing Nymatoids, from a similarly themed story, 'A Touch of Terror' from Creepy 63). They get our protagonist to pack them up and send them to New York, where they can claim more victims.

Fourth is "Jewel in the Mouth of a Snake" by Jose Bea (story & art). The issue's weakest story, it features a man who seeks a large jewel being carried around in the mouth of a giant snake. The man gets lucky when the snake goes into a lake, and he steals the jewel. The jewel has strange effects on him however, and soon he finds himself trapped within the jewel, for good. A rare, late appearance for Bea, who by this point had pretty much stopped working for Warren.

Fifth is the color story "The Succubus Stone" by Ramon Torrents (art) and Gerry Boudreau & Steve Clement (story). This issue was originally advertised to appear in issue 44 but ended up getting held back until this issue. It features a number of young men that suddenly turn old and die after going to a whore house. A detective studying the case eventually tracks down the whore house, finding it occupied by succubuses possessing a mysterious stone. When he shoots the stone, destroying it, they all age and die.

Last is "The Oblong Box" by Isidro Mones (art) and Rich Margopoulos (story). This story appears to have originally be intended for one of the Edgar Allen Poe specials (Creepy 69 & 70). This story features a man on a ship who finds his friend, an artist also boarding, with his wife, two sisters and a large oblong box. Our protagonist appears quite puzzled, as his friend is very quiet and withdrawn, and his friend's wife is ugly and a slob, quite below him. Eventually the ship crashes and sinks, and the artist friend flees away from the escape ship and jumps onto the sinking ship to be with the box, which sinks. The Captain tells our protagonist the truth, that his real wife was within the oblong box, her coffin, which the ship was transporting.
Posted by Quiddity at 3:33 PM