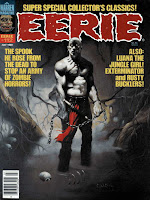 An all Esteban Maroto issue, quite an issue for a big Maroto fan like me. The cover, featuring the Spook, is by Ken Kelly, the sole non-Maroto artistic contribution of the issue.

First is "Stridespider Sponge-Rot!" by Esteban Maroto (art) and Doug Moench (story), from Eerie 58. This is the first of a seven part series entitled 'The Spook' about a black zombie. The term, which is a racist way to refer to black people, had been created by Bill Dubay, who told Doug MOench to write a series featuring. Anyway, this is a fairly good story, featuring the title character encountering a sorceress woman who brings numerous zombies to life. The Spook is able to stop them by throwing her into a fire. Really nice art by Maroto, who'd be replaced with Leopold Sanchez for the remainder of the series after this story. Which is probably why no more Spook issues were included in this issue.

Last is "Luana" by Esteban Maroto (art) and Doug Moench (story), an adaption of the film of the same name. This story is from Vampirella 31. A group of archeologists in Africa are attacked by a group of African tribesmen. Only one of the men, named George, survives, when Luana, a beautiful woman living in the jungle comes and saves him, healing him from the poison arrows that struck him. Returning to civilization, he meets a woman, Isabelle Saxon who is searching for her father, who crashed in the jungle years before with his wife and Isabelle's half-sister (who is actually Luana). An old friend of her fathers, who is involved in drugs with the tribesmen becomes involved, and seeks to kill them, but is outsmarted by Luana, who leads George and Isabelle to the plane crash, where they find a diary that tells the truth about her father's friend, who ends up dying when he struggles with the tribe leader he was allied with.

Third is "Enter: The Exterminator - They Eat Babies... Don't They?" by Esteban Maroto (art) and Bill Dubay (story). Like the Spook, another series where Maroto drew the first story, then didn't draw any more. Taking place in a medieval setting, monsters in the woods have been capturing children. A mysterious man who can heal people appears and asks the king to let him help keep the kids safe by putting them in his care. The kingdom instead hires a mysterious knight known as the Exterminator. The Exterminator realizes that the healer is working with the monsters and attacks them, defeating both of them. He finds a spaceship they are from and kills the healer, who tries to tell him that they are actually there to save the children from the cruelties of the world. The Exterminator afterwards finds the children unharmed. He later speaks to someone from the future, revealing him to be a robot. This story would kick off a series of exterminator robot stories by Dubay, although this was the only appearance of this particular Exterminator robot.

Fourth is "Rusty Bucklers" by Esteban Maroto (art) and Bruce Jones (story), from Vampirella 57. The story is about an old man, Dete, who joins a young knight on his trip to defeat a nearby sorceror and rescue the lady trapped there. It is revealed that many years have passed, the sorceror's dragon has died of old age, the sorceror himself is gone, and the lady is old too. Dete sleeps with her and is killed by the young knight, who overreacts.

Next is an adaption of Nathanial Hawthorne's "Hollow of the Three Hills!", with art by Esteban Maroto and adaption by Rich Margopoulos. This story is from Eerie 63. Absolutely amazing artwork from Maroto in this story. A young woman visits a witch, who shows her two depressed looking old people, a crazy man in an institution and a funeral. It ends up that they were all connected to her, the old people were her parents, upset over her leaving them, the crazy guy was her husband, who went crazy after she had an affair,and the funeral was for her child, who died of the pox after she ran off. The trauma from the visions causes the young woman to become comatose.

The issue concludes with "Fallen Angels" by Esteban Maroto (art) and Bill Dubay (story), from Vampirella 60. The art for this story is sideways. Some very good, exotic art from Maroto on this story, which comes off as a Warren version of the Little Mermaid. A mermaid princess lives in an ocean paradise. She rescues a human man from a shipwreck and falls in love with him. She begs her father, who always taught her that humans were evil, to turn her into a human so she can be with him and he reluctantly permits it. She reunites with the man who treats her kindly at first, but she soon finds him with another woman. Realizing that men are evil, as her father taught her, she tries to return to the sea, but now a human, she drowns.
Posted by Quiddity at 5:57 PM