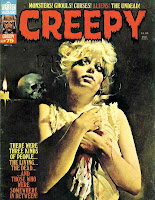 Enrich provides the cover for this issue of Creepy, which is miscredited to Sanjulian. This issue is cover dated May 1976, and was the first issue during Louise Jones's era as editor. Jose Ortiz provides a one page intro from Uncle Creepy on the inside front cover.

First is "As Ye Sow..." by Luis Bermejo (art) and Bruce Jones (story). This story takes place in a post apocalyptic society featuring a family of cannibals. The daughter of the family finds a man hiding in the woods. They fall in love with each other and she hides him from the others. When her family finds him and tries to eat him, she tries to scare them off with a cross but they shoot her in the face. They force her to have babies with the man, which they then proceed to eat.

Second is "Kui" by Alex Toth (story & art). This story features a man traveling to a South American temple during his vacation with his reluctant wife. They search for an entrance and eventually find it, going inside. They end up trigger a trap however, and are buried alive with sand because of it.

Third is "The Super-Abnormal Phenomena Survival Kit!" by John Severin (art) and Jim Stenstrum (story). This hilarious story is a parody of the Captain Company ads that appeared in the back of each Warren magazine. Eight pages of parodies and horror movie staples/homages results in a fairly good effort, one of Warren's best humorous stories.

Fourth is "The Shadow of the Axe!" by Russ Heath (art) and Dave Sim (story). This story was Sim's sole Warren appearance. It features a boy living in a small town who suspects his father is an axe murderer. To stop him, he turns on his father and kills him with an axe. The next day, his mother winks at him, making one wonder if she was responsible for it all.

Fifth is "Visitation at Pliny Marsh" by Martin Salvador (art) and Gerry Boudreau (story). This story features mysterious events occuring near a swamp including the corpse of a man killed years before by his wife and lover appearing, and a mysterious fish like alien. The corpse attacks the lover of his wife, killing him, then confronts her, but is stopped by the alien, who apologizes for bringing the corpse back to life by his presence there. The alien is shot however by one of the men in the town, and the wife hangs herself soon afterwards.

Last is "The Pit in the Living Room Floor!" by Joaquin Blazquez (art) and Budd Lewis (story). A very good, odd story. A man hears mysterious noises from under the floor in his living room. Eventually a bizarre looking man bursts out of the floor, and our protagonist kills him. Looking at where the man came from, he finds a seemingly never ending pit coming below the floorboards. He decides to head down into it and after a very long time, reaches the bottom. He bangs on the floor of the pit, eventually breaking through, only to be shot by himself, much like what happened at the start of the story.
Posted by Quiddity at 7:48 PM

Hello, Just like to drop you a line to say Welcome Back! I recently discovered your site, and as someone who 'grew up with the Warrens', I really appreciate all the work you put into reviewing these great old mags - although I'm sure it's a lot of fun too!

I did have a quick question about this issue, though. I seem to remember bits and pieces of a story where a man and a pretty women were locked in an old crypt,the man dies, and the women is forced to *ahem* munch on him until she is able to be finally released. That's pretty much all I recall of it, but that bit stuck in my mind as being extremely shocking and offensive in the way it was depicted, especially for that era. I'm almost 99.9% sure it was in Creepy Magazine (pretty much all I read)from the mid/late seventies, and the cover of issue #79 is almost perfectly descriptive of this story - however your review of this issue doesn't describe any such story like the one I have in mind. Have you come across anything like that in Creepy, or any of the other Warren mags? Just Curious, as it left quite an impression on my young mind back in the day!

Great job on the reviews, and keep up the outstanding work!!

Glad you enjoy the blog! I can't recall that being in a Warren mag from what I can remember off the top of my head, but I can look into it and see if I can track down that story for you. There is a very similar story from Tales from the Crypt #23 I believe, called "Last Respects" which features a man visiting his deceased lover in her crypt, then getting locked in and is forced to eat her, which kills him due to the embalming fluid in her.

I remember when I was about seven my mom read this issue of Creepy magazine and made me quit reading it for a while. I was soooooo mad.