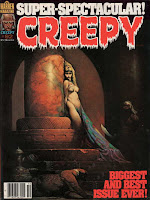 Frank Frazetta's cover from Eerie 23 is used for this issue of Creepy. One of his best, if not his best cover for Warren, although its annoying to see it reprinted here instead of having a new one. This issue is cover dated October 1977. Aside from the fact that the cover's a reprint, this is an extremely good issue.

First is "A Toast to No Man's Memory" by John Severin (art) and Len Wein (story). A group of pilots, including a young newbie, Babbit agree to save a bottle of wine for the last one of them that lives. The pilots slowly start dying in battle, much due in part to Babbit's cowardice. Eventually the last one of them is shot by Babbit himself when he threatens getting him court martialed. Babbit drinks the wine, but it ends up that the last of the pilots poisoned it, so it kills him.

Second is "Mrs. Sludge and the Pickled Octopus Raid" by Luis Bermejo (art) and Bill Dubay (story). A young man comes across a cabin in the dead of winter, away from civilization. The people inside tell him of Octopus-like aliens whom they found and killed, which they found to taste quite good. The young man runs off to tell someone about the discovery of alien life. It ends up that the people in the cabin are actually the aliens though, and are anxious to find more humans to eat.

Third is "Instinct" by Richard Corben (art) and Nicola Cuti (story). A king marries a beautiful young woman from an odd country of people. He desires to have a son greatly, but she bears him only daughters. Years go by and she is pregnant yet again, but starts acting strangely, biting their kids. Her attendant tells the King that in their country, mothers kills their children. When the King tries to stop her, he dies of a heart attack. She is banished from the kingdom as soon as the son is born, who ends up being born as a rat! This story was eventually done back in 1970 and for some unknown reason was held back for seven years.

Fourth is "Towards High Places" by Ramon Torrents (art) and Bruce Jones (story). This story tells of twin princesses during the Egyptian empire, Euthesus and Tanakus. As the older of the two, Euthesus is set to become queen upon their father's death. Tanakus falls in love with a slave, which Euthesus kills. Euthesus wants her body to be undisturbed forever, and Tanakus helps her set up a chamber in her pyramid to do so using the knowledge taught to her by her former lover. When Euthesus tries to trap her within the pyramid however, Tanakus tricks her and rules Egypt in her place while her sister is buried alive. Some very nice art and a good story that ties in to the reprint cover.

Fifth is "The Executioner" by Russ Heath (art) and Heath & Cary Bates (story). This story features a hitman, Tony Desoto who kills a big time mobster, and quickly rises through the ranks because of it. Eventually he decides to retire and is hired by his boss to do one last hit. It was a set up, but he is still able to get out alive. He goes to a prosecutor to try to get immunity, but that prosecutor is also working for the mob, and kills him.

Sixth is "Goddess in a Kingdom of Trolls" by Esteban Maroto (art) and Gerry Boudreau (story). This story tells of a human woman who was brought up by trolls. Seeking a human lover, she wanders away from their kingdom one day and meets a hunter in the woods. Hymie, a troll wizard puts on a magic hat that makes him look like a handsome prince. He casts a spell on the hunter then finds the woman, trying to get her to fall in love with him. Hymie later meets a mysterious beautiful woman in the woods wearing a hat. When the truth is revealed, he helps our heroine find the hunter and discovers that the other woman he met is a fellow troll who was using the same type of spell as he. A very good story and some extremely good art from Maroto.

Seventh is "Everybody and His Sister" by Leopold Sanchez (art) and Jim Stenstrum (story). This issue's weakest story, it features a man who finds many people suddenly showing up where ever he goes. This includes at work, in a restaurant and even at his apartment. When they all run in an elevator with him it crashes, but when he awakens in the hospital he is told he was the only one there. When he is about to be operated on though, all the pople suddenly show up again.
Last is "The Generations of Noah" by Leo Duranona (art) and Roger McKenzie (story). An ark-like spaceship starts traveling from planet to planet, saving a male and female from each planet. Its leader is a frog like alien similar to Noah who makes himself appears like an old man. When the ark comes to Earth though and picks up a young couple, everything goes wrong. First 'Noah' is killed by the father of the female human, then the ark is blown up by missiles just as it is about to leave Earth.
Posted by Quiddity at 6:17 PM