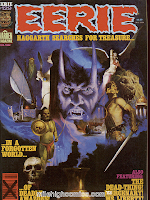 Sanjulian provides the rather cluttered cover for this issue of Eerie, dated February 1982. Like the previous issue, this is actually quite a step up from what Eerie had been providing over the previous few years.

First is "Ode to a Dead Thing!" by Rudy Nebres (art) and Bill Dubay (story). This story features Marvin the Dead Thing, who originally appeared back in Eerie 49. While the writer of that story, Al Milgrom, made it a parody of Swamp Thing, this story is anything but a parody, actually quite serious. Marvin and the girl who became a swamp monster as well watch a couple drop a dead baby into the swamp. The father is a man who conspires with an old woman to get women pregnant, then make money off of aborting them. Here, the mother refused to abort the baby, so the old woman strangled it when it was born. The baby comes to life out of the swamp, as does the mother when she dies and is placed there as well. The villain of this story has got to be one of the most detestable people in a Warren story ever.

Second is "Ms. Liberty" by Jun Lofamia (art) and Rich Margopoulos (story). A woman travels throughout a post-apocalyptic world, searching for her husband. The vast majority of humanity has turned into mutant cannibals. As she searches, she comes across some other normal humans, but finds them either crazy, or ends up killing them due to herself going crazy. In the end she finally finds her husband, but ends up killing him, thinking he's one of them.

Third is "Mercenary!" by Pat Boyette (art) and Nicola Cuti (story). Quite pleased to see another Boyette story, he's an artist I quite enjoyed during the stories he did with Warren during the late 1960s and early 1970s. This story is an oddity here in that it doesn't feature any supernatural theme to it. It is about Ed Skinner, a Mercenery, and his adventures in various south american countries. Along the way, he learns a president is also the leader of revolutionaries. He takes a large payoff to keep quiet, and escapes the death the president plans for him.

Fourth is a new series, Space Force, with the story "Shipwrecked". This story was originally published in France in 1964. Art is provided by Paul Gillon and story is provided by Jean-Claude Forest. In the future Earth is attacked by alien spores. To ensure humanity stays alive, a man and a woman are put into capsules and sent out into space. The man, Chrisopher, is recovered many years in the future and is resusitated. The man finds that the spores are still around, and bigger than before. He flees, with one of the women who recovered him, in search of the woman who was shipped out to space along with him. A fairly interesting story here and some good art too. One of the panels here is strikingly familiar to one from Esteban Maroto's "Scourge of the Spaceways", one of my favorite art jobs in a Warren story ever. As this story came out first, its obvious Maroto's work was a swipe however.

Last is the latest story in the "Haggarth" story, with story and art provided by Victor de la Fuente. In this story a strange man appears before Haggarth and warns him Desirra and the Amazon warriors in the jungle. Heading through the woods, he comes by an injured man who was hurt by the Amazon warriors. As Haggarth's part in this story ends, he is attacked by the Amazon warrior he met before and her eagle. Ethan meanwhile is captured when some village dwellers find him in the canoe used by their dead comrades. Accusing him of their murder, they are set to execute him but proof of his innocence is found and he is permitted to leave in the canoe.
Posted by Quiddity at 5:19 PM