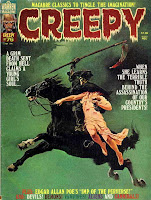 Sanjulian provides an interesting cover for this issue of Creepy, featuring the grim reaper on a horse, carrying a headless woman's corpse. This issue is dated January 1976. Berni Wrightson and Walt Simonson provide a one page intro from Uncle creepy

First is "Goodbye, Mr. Lincoln" by Jose Ortiz (art) and Bill Dubay (story). A very interesting story surrounding a woman whose son is murdererd. At the police station she explains that her son is actually the reincarnation of a slave boy who had a spell cast on him by an old woman. After the boy's death, he is reincarnated as leaders such as Abraham Lincoln and John F Kennedy, but is always assassinated. In the modern era, Satan's forces captured the woman and her son and killed him. While the policeman believes his story, he leaves her in the care of another person, who is actually a demon, who kills her for talking.

Second is "Ensnared" by Alex Toth (art) and Rich Margopoulos (story). This story features a man who wakes up and finds himself trapped in an elevator. After much anguish, he finally gets out, but it is revealed to be part of an experiment performed by robots (or perhaps aliens in robot-like suits).

Third is "A Flash of Lightning" by John Severin (art) and Gerry Boudreau (story). A mysterious man comes across a man's farm and starts working for the farmer. Soon afterwards mysterious deaths start occuring, that appear to be the work of a vampire, which is of course the man who just appeared. The farmer comes across the man with his daughter and they get in a fight, and the man is accidently stabbed by a sharp piece of wood, killing him. As the story ends, it is revealed that the daughter is pregnant.

Fourth is "My Monster... My Dad" by Martin Salvador (art) and Jan Strnad (story). A rather bizarre story about a boy who hates his black stepfather, thinking he's a monster. He has multiple dreams, including one where he stabs his step father, and that occurs in real life. A real odd one here. There is nothing evidencing that the father is a monster, making it come off as simply a story about a very racist and delusional boy.

Fifth is "In Darkness It Shall End!" by Vicente Alcazar (art) and Doug Moench (story). A vampire kills a woman who is a lover of his. Another lover of the woman discovers that he is a vampire and comes after him, and chases him, eventually striking a stake through his heart. Unfortunately hundreds of years later in the modern era someone removes the stake, causing the vampire to rise again.

The issue concludes with "The Imp of the Perverse!" by Luis Bermejo (art) and Rich Margopoulos (story), an adaption of the Edgar Allen Poe story. A man plans to kill his rich uncle in order to inherit his money. He does it by creating a poison candle which he burns in the old man's bedroom. With no one suspecting things, he keeps muttering "I am safe" to himself over and over again until he suddenly blabs in public about killing his uncle. As a result, he is jailed and hung for murder.
Posted by Quiddity at 5:19 AM

Hi, you might enjoy my 21st. cent. update of Poe's work, The Imp of the Perverse. It's here:
http://brintmontgomery.blogspot.com/2009/07/core-of-evil-edgar-allan-poe-updated.html