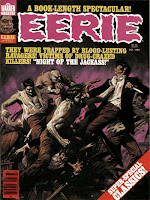 Jim Laurier provides the cover for this issue of Eerie, featuring Night of the Jackass. This issue collects all four stories in the series within this issue.

First is part one of 'Night of the Jackass', titled "24 Hours of Hell!" by Jose Ortiz (art, his Eerie debut) and Bruce Bezaire (story). This story is from Eerie 60. A terrific, terrific serial, probably my favorite in Eerie after 'Apocalypse'. The story surrounds a drug which when taken causes a person to turn into a monster, but kills them after 24 hours. A group of poor old people head to a hotel, lock it up and take the drug, then go on a rampage, killing and raping everyone inside. A newlywed, Garson, witnesses his wife murdered by them, but is one of only two people to survive, the other being Bishop, a man who planned to kill himself but changed his mind when the jackassers went on their rampage.

Second story is the second part in the 'Night of the Jackass' series, "Storm Before the Calm!" by Jose Ortiz (art) and Bruce Bezaire (story), from Eerie 63. Garson and Bishop meet up once again at a church that has been taken over by the Jackassers. While no one else wants to go inside and help the victims, Garson and Bishop do so and with the help of people inside are able to defeat all the monsters.

Third is part three of the Night of the Jackass series, "The Children's Hour", with art by Jose Ortiz and story by Bruce Bezaire, from Eerie 64. A group of children take the Hyde (25) drug, causing another rampage. Bishop and Garson once again arrive to help stop them and meet Berthe Astruc, a chemist who seeks to create a cure for the drug. During the fighting Garson realizes that Bishop's nearly as bloodthirsty and willing to kill as the Jackassers and is helping more out of a desire to output his rage upon them than save others. As the story ends they decide to help Berthe find a cure.

Fourth is the final entry in the Night of the Jackass series, "Endstorm", from Eerie 65. Art is by Jose Ortiz and story is by Bruce Bezaire. Bishop and Garson head to Berthe's lab where she hopes to finish her Bishop reads Berthe's notes and realizes that she was the one responsible for creating the Hyde drug. Berthe forces him out, but Garson gets upset and leaves as well, only to find that Bishop has taken the drug and become a jackasser. Bishop goes out of control and attacks them, but Berthe is able to use her antidote which works, turning him back to normal. The series ends here on an optomistic note, with our heroes now having a way to cure the jackassers. Overall this is certainly one of Eerie's best series ever, with a unique and interesting storyline and great Ortiz art. While the series certainly had an open ended conclusion, Bezaire avoided a lame ending and let it end on a high note.

Last is "Excerpts from the Year Five", from Creepy 67, by Jose Ortiz (art) and Budd Lewis (story). This story takes place in a future where all the power in the world has vanished. The story focuses on a man, who meets a woman when receiving first aid. They help fellow people and find a young boy eating the remains of his mother. Eventually Satan worshippers kill the boy however, and the woman dies soon afterwards as well.
Posted by Quiddity at 4:50 PM