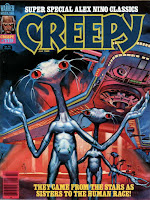 Jim Laurier provides an interesting and somewhat funny cover to this issue of Creepy. This issue is an all Alex Nino reprint special, dated July 1980.

First is "A Boy and His Thing" by Alex Nino (art) and Bill Dubay (story), from Creepy 101. A young boy visits a ship captain who is a friend of his. The captain tells him of a giant tentacled creature they fought and killed at sea. He brought back the baby of the creature, which he gives to the boy.

Second is "Keep Kool" by Alex Nino (art) and Bob Toomey (story), from Creepy 104. An old man who is quite wealthy despises humanity so he heads off to another planet where his only companions are robots. He has the robots fight one another, then receives a giant box that he can create monster from to fight one another.

Third is "Always Leave 'Em Laughing!" by Alex Nino (art) and Len Wein (story), from Creepy 105. All clowns are banned from Earth and forced to head to the moon if they want to remain a clown. There they fail to generate any laughs from the robot population and decide to bomb the surface of the moon to turn it into a clown face It is successful, but they are killed by Earth who misunderstand their intensions.

Fourth is "Sisters" by Alex Nino (art) and Bill Dubay (story), from Creepy 97. This story contains two parallel stories featuring a human girl and alien girl facing extreme mental anguish. It ends up that both had twin sisters that were stillborn, and that the two are connected to each other as the alien is the human girl's dead sister and vice versa. Both girls end up killing themselves, reunited when reincarnated as twins on yet another alien planet.

Fifth is "Backwater and Timing Circles" by Alex Nino (art) and Budd Lewis (story), from Creepy 94. A boy takes a trip to the past to go fishing in the prehistoric era through the company Timing Circles. His guide warns him that they can't take anything back with them and must not kill anything, but when the guide gets in trouble, the boy stabs the dinosaur attacking him. This changes the present such that everyone becomes bizarre looking monsters. This story is blatant plagarism of Ray Bradbury's story A Sound of Thunder. Luckily for Warren, they never got in trouble with this as they did with Harlan Ellison's A Boy and His Dog.

Sixth is "Alien Strain" by Alex Nino (art) and Bill Dubay (story), from Creepy 96. A 'Banggi' and his human friend are attacked by various aliens when they arrive at a planet where they have transported some robots. The mob has good reason to fear him however, as by arriving the Banggi has caused an epidemic where thousand of Banggi larva work their way through various prostitutes, infesting the planet. Very odd looking aliens here by Nino, as usual for him.
Posted by Quiddity at 9:14 PM