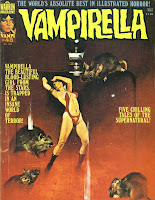 Enrich provides the cover for this issue of Vampirella, dated January 1976.

First is Vampirella in "The Wonder World of Ambegris, Kato and Tonto Too!" by Zesar (art) and Bill Dubay (story). When Vampi sees a pair of dwarves leading a doctor underground, she follows them and finds a nineteenth century style underground city. The father of the dwarves and other odd people is Ambegris, who is about to die of old age. By giving him some of her blood, Vampi enables him to live a little longer, although he gets too excited and ends up suffering a heart attack, passing away. Some nice art by Zesar here, a bit different than the usual fare.

Second is "The Satan Complex" by Ramon Torrents (art) and Bill Dubay (story). A businessman obsessed with being able to fly goes to a company run by Satan. While waiting in the lobby he has a dream about meeting Satan himself, who turns him into a bat. He makes sure that when he signs the contract with Satan that he remains human. But Satan still finds a way out of the contract by taking away his flying ability after a mere minute because the contract didn't specify how long he'd have the ability to fly. As a result, he falls to his death.

Third is "Of Death and Distinction" by Joaquin Blazquez (art) and Gerry Boudreau (story). An unemployed man who lives with his girlfriend becomes obsessed with the fact that he's a nobody. Meanwhile a slasher killer plagues the streets, killing many. Thinking that by taking credit for the deaths will make him famous, the man kills his girlfriend and admits to being the slasher. Only the real slasher had already been caught, meaning he killed her for nothing.

Fourth is "The Miracle Hands of Simon Silverstone" by Luis Bermejo (art) and Bill Dubay (story). Yet another terrific art performance here by Bermejo. Silvershoe is a man with the ability to heal people and change the faces of people, merely with his hands. He meets a woman who tells hiim that he is actually an alien savior, and that he needs to find a silver shoe to fulfill his destiny. They are caught by disbelievers however, and despite him changing his face to hide himself, he is killed nonetheless.

Last is "Star-Bright Lantern 909" by Jose Ortiz (art) and Gerry Boudreau (story). The lantern of the title is a space lighthouse run by an old man whose been alone for many years. Rebels are seeking an attack on the government, but know that in order to succeed the lighthouse can't identify them. As a result, they send a young woman to the lighthouse to seduce the old man so they can get by without being noticed. Only being alone causes the old man to snap, and he kills her instead. When another rebel goes there and finds what happened, he kills the old man, then tears the mechanics of the place part. Only instead of turning out the light, that causes the whole place to blow up, and the explosion is so big that it lights up the rebel crafts and they are all destroyed by the government.
Posted by Quiddity at 9:13 PM