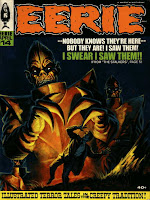 Vic Prezio provides the cover for this all reprint issue of Eerie, cover dated April 1968. The frontis for this issue is "Eerie's Monster Gallery: The Mummy" by Wally Wood & Dan Adkins (art) and Archie Goodwin (story).

First is "The Stalkers" by Alex Toth (art) and Archie Goodwin (story), from Creepy 6. A man goes to a psychologist, telling him of these bad dreams he is having where he is confronted by aliens that look like prune faced people. The psychologist reveals that he's an alien himself, and that our protagonist is one as well, who had been on Earth in human form so long that he forgot who he was.

Next is "Pursuit of the Vampire" by Angelo Torres (art) and Archie Goodwin (story), from Creepy 1. The story features a group of townspeople being joined by a stranger who tells them two murder victims are actually going to turn into vampires since a vampire was their killer. He leads them to a house where they are and kill them. The town leader ends up being the vampire that killed them, but the stranger, who is a werewolf kills him to eliminate competition for victims.

Third is "Howling Success" by Angelo Torres (art) and Archie Goodwin (story), from Creepy 3. A city is plagued by a werewolf. A man who hates his wife encounters the werewolf but is safely able to hide from it by running through a cemetary fence. He plots to bring his wife to this spot at he next full moon so she can get killed by the werewolf, making him money on insurance. Only when he brings her there he discovers that she's the werewolf and becomes its next victim!

Up next is "Untimely Tomb!" by Angelo Torres (art) and Archie Goodwin (story), from Creepy 5. The title is credited to Anne Murphy, Goodwin's wife. This story features a doctor who is humiliated when a girl whom he pronounced dead is found alive by her brother, only for her to die due to being entombed alive. The brother confronts the doctor, who strikes him down and ends up killing him. When his corpse is put in the doctor's family crypt he fears that it is alive and heads inside, dying of fright after thinking it true. Only it ends up the corpse was stored elsewhere and he was all on his own after all.

Fifth is "Curse of the Full Moon!" by Reed Crandall (art) and Archie Goodwin (story), from Creepy 4. A rich man, Henry, has his coach attacked by a wolf, and his driver killed, He encounters an old gypsy woman who tells him that it is a werewolf, and he is to be the creature's next victim. Henry plans to hunt the werewolf with his two hunting buddies and when the werewolf attacks him, he kills it with a silver bladed knife. Because he was bitten however, he becomes a werewolf himself and his killed by his friends.

Last is "Blood and Orchids" by Al McWilliams and Archie Goodwin (story), from Creepy 4. A doctor assists in a murder investigation where multiple people have been found with their blood drained. He suspects it is because of a countess he met who doesn't use mirrors, brought over native soil for her plants, and doesn't go out during the day. He naturally thinks she is a vampire, but it is actually her blood drinking plants that are the culprit.

Oddly enough, this Eerie reprint issue has all Creepy reprint stories.
Posted by Quiddity at 7:31 PM