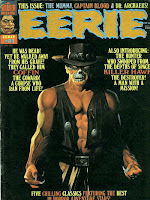 This issue of Eerie kicks off with a cover by Ken Kelly, featuring Coffin, the first of three covers featuring this character. The inside front cover features an intro by Cousin Eerie by Berni Wrightson.

Up first is "Death Wish!" the first part of the series Coffin by Jose Ortiz (art) and Budd Lewis (story). This series had been advertised for quite a long time and was delayed over and over again until it finally premiered here. Coffin is a man whose stage coach in the desert is attacked by Indians, resulting in harm to the many aboard. Coffin heads after the Indian tribe and kills them, but the last three capture him and stake him to the ground, where ants ravage his body. He wakes up much later finding his decayed body and seeks revenge on the Indians, killing two of them. The third tells him they had nothing to do with the attack and curses him to live forever in his mutilated form. Coffin is brought to a hospital and while leaving discovers the true culprits, three white men who posed as Indians. Coffin enacts his revenge on them. A nice start to a really good series, although it'd be a little while before the next segment.

Next is "Killer Hawk" by Wally Wood (art) and Bill Dubay (story). While no official title appears, this is another 'Exterminator' story, this time stand alone in nature. Killer Hawk is a military officer who rises through the ranks and becomes bodyguard for the President of Mars. In actuality, Hawk is an exterminator robot whose mission is to kill the President and take him place. He does exactly that, but is deemed too powerful and is disposed of by his leaders soon afterwards.

Third is "Cotton Boy & Captain Blood" by Leopold Sanchez (art) and Gerry Boudreau (story). The Cotton Boy of the title is an old slave who brings back to life Captain Blood, the pirate who originally brought him to America. Using Blood's corpse he enacts revenge on various merchants, including one that has already died by giving him life, resulting in him being trapped in a coffin. Cotton Boy has additional plans, but Captain Blood kills him and heads back into the sea.

Fourth is the return of the Mummy and Werewolf to Eerie, "A Battle of Bandaged Beasts". The two series have been combined into a single one titled "The Mummies Walk". Neither Jaime Brocal nor Martin Salvador are anywhere to be seen, with Joaquin Blazquez now handling the art. The writing continues to be done by Steve Skeates. Arthur Lemming and Jerome Curry in their mummy forms meet and battle it out. Meanwhile the dwarf who stole Lemming's body robs a carriage and takes captive a beautiful woman whom he had met while a dwarf. She incidently has the amulet which is the key to both mummy's regaining their original bodies. She knocks him out however and escapes. Blazquez's art here just doesn't fit that well, particularly his poorly done action scenes and this is a sore dissappointment after Brocal's excellent work a number of issues back.

The issue wraps up with the conclusion of the Dr. Archaeus saga, with three different titles, "Foreplay", "Penetration" and "The Climax". As always art is by Isidro Mones and story is by Gerry Boudreau. Jamaica Jansen puts out a bounty for Archaeus's head. Archaeus, who manages to kill the sixth juror, finds himself on the run and trapped by an expert assassin. Rather than let the assassin win, Archaeus chooses to hang himself, and dies this time for real. So ends a terrific serial.
Posted by Quiddity at 3:50 PM