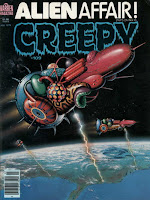 Very bizarre looking spaceships on the cover of this issue of Creepy, done by Jim Laurier.

Up first is "Vampire Dawn" by Pepe Moreno Casares (art) and Archie Goodwin (story). The story features a vampire found in an outpost in the Arctic. By biting some of the men, they are turned into vampires, and soon all but two of the men are vampires. While a helicopter comes to rescue them, knowing that they will just be attacked as well, the last remaining man blows everything up.

"The Organizer" is next, by Leo Duranona (art) and Bruce Jones (story). It features scientists turning prison inmates into bugs so they can use miniature cameras to find information on another criminal. All but two are killed, but they do successfully complete their mission only to find themselves abandoned as there is no way for the scientists to turn them back to normal. They get revenge by amassing a large swarm of bugs to attack them.

Third is "The Ravenscroft Affair" with art by Paul Neary and story by Bill Dubay. It features a man who opens up a hole to another dimension. There he sees a monster that he becomes obsessed with encountering again. He spends a long time building a machine to open up the hole to the other dimension again and builds a sculpture of the creature to provide as a gift. Not having a gift however, the monster tears his head off and tries to use that! This art looks absolutely nothing like Neary's usual stuff.

Next is "Alien Affair" by Val Mayerik (art) and Cary Bates (story). It features an alien organism that starts growing around a ship and eventually transforms the three astronauts within the ship to turn into alien like creatures as well. Two are killed while the last one is captured.

Last is "Heart of Darkness" by Luis Bermejo (art) and Bill Mantlo (story). It features a man in possession of some animals that he crashes on a planet with. Aliens that look like chimps come after him. He eventually is killed by them. Not that good a story and Bermejo's artwork is absolutely dreadful, its hard to even tell that its him.
Posted by Quiddity at 5:21 PM