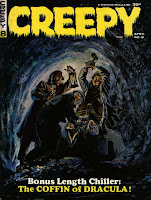 Up first is "The Coffin of Dracula" by Reed Crandall (art) and Archie Goodwin (story). A man comes into possession of Dracula's coffin and sits in it, becoming Dracula himself. He invites people to his mansion then steals one of the women and runs away with her. The Van Helsings start looking for him and find a monster in a cave. This story would be concluded in the next issue.

Next is "Death Plane" by George Evans (art) and Larry Ivie (story). Evans was a terrific artist at EC but unfortunately did very few Warren stories, just this and a few for Blazing Combat. This story features a mysterious plane that is taking out both American and German planes during the war. One of the American officers is killed and realizes that the ghost of each person killed appears in the plane until they can kill someone else.

Another EC great is next, Johnny Craig, using the pseudonym 'Jay Taycee' in his Warren debut, "The Mountain". This story, like the previous one, is done in pencil only. A woman wandering in the winter wilderness comes across a cabin on a mountain and meets a man inside who asks her to bring the town mayor to him so he can take over his mind. She does so and the young man reveals his true self, the Devil, who is able to wreak havoc on the world now that she has brought him a body he can use to escape the cabin in which he has been trapped.

Fourth is "The Invitation" with art by Manny Stallman (in yet another Warren debut in this issue) and story by Russ Jones, Larry Englehart and Maurice Whitman. A Baron gets in a car accident and comes across a mansion where vampires live. He convinces them to let him live as long as he brings them victims. He does, but eventually they turn him into a vampire as well. Whitman would very lamely repeat this exact same story in issue 17 in the story "A Night Lodging".

"Adam Link's Mate", one of the many Adam Link stories by Warren appears next, with art by Joe Orlando and story by Otto Binder. In this story, a scientist convinces Adam to create a female robot, Eve, which he does. The scientist then manages to manipulate their minds using a helmet he puts on them and gets them to rob banks for him. Adam is freed of the helmet's influence when a friend stops by, but he is attacked by Eve and thrown over a cliff to his apparant demise.

"A Vested Interest" is next, by George Tuska (art, his sole Warren appearance) and Ron Parker (story). A man sees a werewolf and confides in a stranger at a bar about it. He goes with the stranger to find the werewolf and brings a camera with him, and the stranger ends up being the werewolf. He reveals a gun with silver bullets in the camera, but the werewolf, whose wearing a bullet proof vest gets the better of him.

Last is "Fitting Punishment" by Eugene Colan (art, in his Creepy debut) and Goodwin (story). It features a grave digger who gets caught by the police in the act. He hides in a mausoleum and steals a dead man's clothes to escape, but the clothes shrink while he's wearing them, killing him.
Posted by Quiddity at 6:14 AM