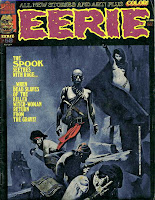 A terrific, terrific issue of Eerie. The cover features the Spook and is by Sanjulian.

First story is "Enter: The Exterminator - They Eat Babies... Don't They?" by Esteban Maroto (art) and Bill Dubay (story). Taking place in a medeival setting, monsters in the woods have been capturing children. A mysterious man who can heal people appears and asks the king to let him help keep the kids safe by putting them in his care. The kingdom instead hires a mysterious knight known as the Exterminator. The Exterminator realizes that the healer is working with the monsters and attacks them, defeating both of them. He finds a spaceship they are from and kills the healer, who tries to tell him that they are actually there to save the children from the cruelties of the world. The Exterminator afterwards finds the children unharmed. He later speaks to someone from the future, revealing him to be a robot. This story would kick off a series of exterminator robot stories by Dubay, although this was the only appearance of this particular Exterminator robot.

Second is "Webtread's Powercut", featuring the Spook. The art is by Leopold Sanchez, in his Warren debut, and story is by Dough Moench. The Spook comes across a beaten old witch, Jessala, who tells him of the people who attacked her. Spook heads there and kills the men, chopping off their fingers and using it to bring her back to life.

Third is "The Pepper Lake Monster" by Berni Wrightson (story & art). A terrific story, perhaps Wrightson's best. A man whose job it is to seek out sea monsters finally finds a real one in the small town of Pepper Lake. When the town folk refuse to help him, he comes up with an elaborate contraption to capture it and succeeds. When he tells the town folk how famous he'll be for capturing it however, they kill him since removing the monster will remove any reason for someone to come to the town.

Fourth is "Mind of the Mass", part two of the Child series. Child is on the run after scaring a little girl while traveling through a new town. He meets a blind old woman whom he befriends. The town mob, thinking she's a witch burns her at the stake, but her house ends up collapsing on them. Child is left alone once again.

Fifth is another Spook story, "Knucklebones to Fever Twitch", by the same people as before. A group of slave traders end up starving all the slaves on their ship to death by not feeding them. Spook makes a deal with Jessala to bring them back to lie as zombies and they take revenge on them.

Last is another sement in Dr. Archaeus, "Carnage in Costume" by Isidro Mones (art) and Gerry Boudreau (story). This time Archaeus is coming after a juror holding a costume party. Sanford and Jamaica head there hoping to catch him but fail when rings around the host's neck (part of his costume) end up killing him. Jamaica meanwhile meets Archaeus in person when she goes to meet her sister in law, who just happens to be his neighbor.
Posted by Quiddity at 1:53 PM