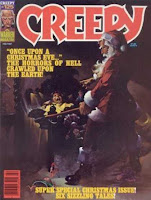 Up first is "Once Upon a Christmas Eve" by Martin Salvador (art) and Bill Dubay (story, credited as Will Richardson). The story features a pair of bums on Christmas who encounter demons trying to trap them in bottles of alcohol. Luckily they are able to escape. It appears to be a dream, but is enough to get them to try and turn their life around.

Next is "His Own Private Demons!" by Anton Caravana (art) and Roger McKenzie (story). Story features a grown man recalling his childhood where a demon that was part of him caused him to do bad things. As an adult, the bad deeds continue.

Third is "Top Dog!" by Alex Nino (art) and Roger McKenzie (story). The story features a mob boss threatened by new enemies. He recruits a group of leprechauns to help them, by promising them gold. They defeat his enemy, but with no actual gold he is forced to let them be in charge.

Next is "Jacque Couteau's Circus of the Bizarre" by Alex Toth & Carmine Infantino (art) and Roger McKenzie (story). A fairly good short story at only 5 pages features a freak show where regular humans are the freaks and the audience are bizarre looking mutants. Toth & Infantino provide an interesting art job in this one time only team up.

"The Tempered Sword" is next, by Alfredo Alcala (art) and Manuel Auad (story). The issue's weakest effort, it features a sword that is able to absorb the emotion of the person that uses it. A slave who finds the sword hears the story of its origin from an old man.

"Living Death Camp!" by Auraleon (art) and Roger McKenzie (story) follows, It takes place in Nazi Germany where a number of jews are brought to a concentration camp. Due to the help of a vampire however, they are able to turn on their captors.

Last is "Knight Errant" by Mike Saenz (art) and Roy Kinnard (story). The story features a knight battling a crab like creature and a dragon, inspired by visions of his beautiful lover. However a vision distracts him during the battle with the Dragon and he is defeated. It is revealed that everything is actually a simulation; the knight is actually a small mutated creature using a robot body who passes away due to his wounds. Very good art in one of Saenz's few Warren appearances.