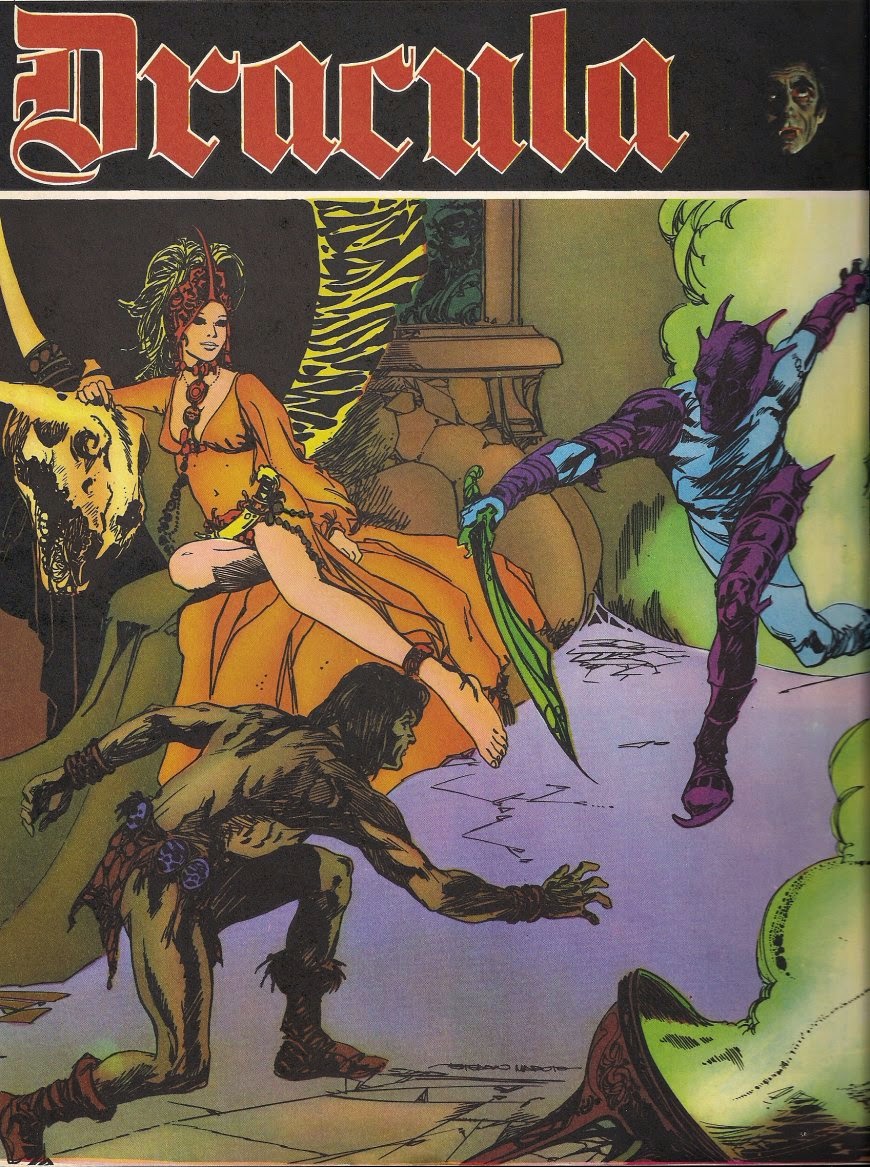 Esteban Maroto once again provides a pen and ink cover for this issue of Dracula, featuring Wolff taking on an enemy while a woman watches. 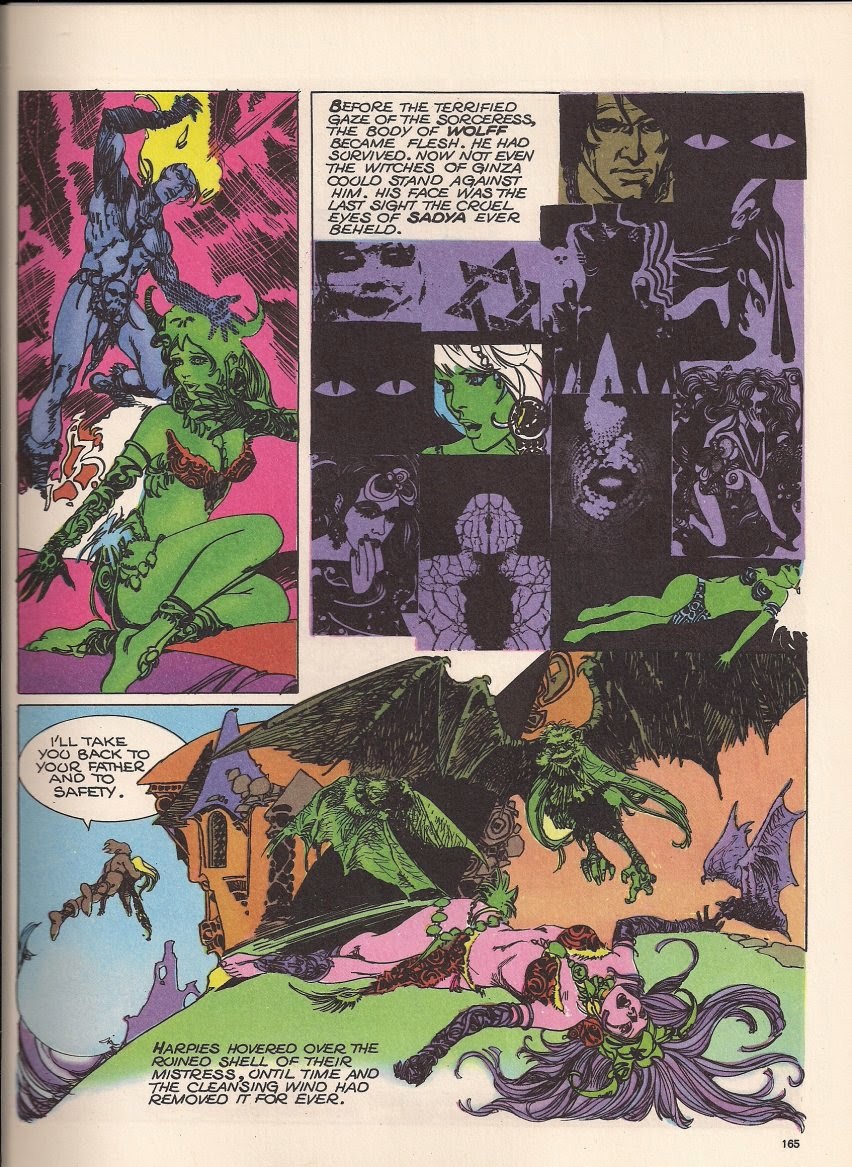 As usual Wolff opens up the issue in "The Return of Sadya" by Esteban Maroto. Katerina is captured by Sadya, the torturer for the witches of Ginza. Katerina is taken away by winged creatures to Sadya's stronghold. Katerina's father believes Wolff is their only hope, and works on casting a spell on him so he will awaken. Wolff appears at Katerina's cell, but he is in fact a monster, the Polingur, a hideous spined creature. Polingur carries the unconscious Katerina to Sayda. Katerina's father continues his spell on Wolff. At Sadya's stronghold, the Polingur dies and Wolff appears. Wolff carries Katerina off to safety while harpies kill Sadya. 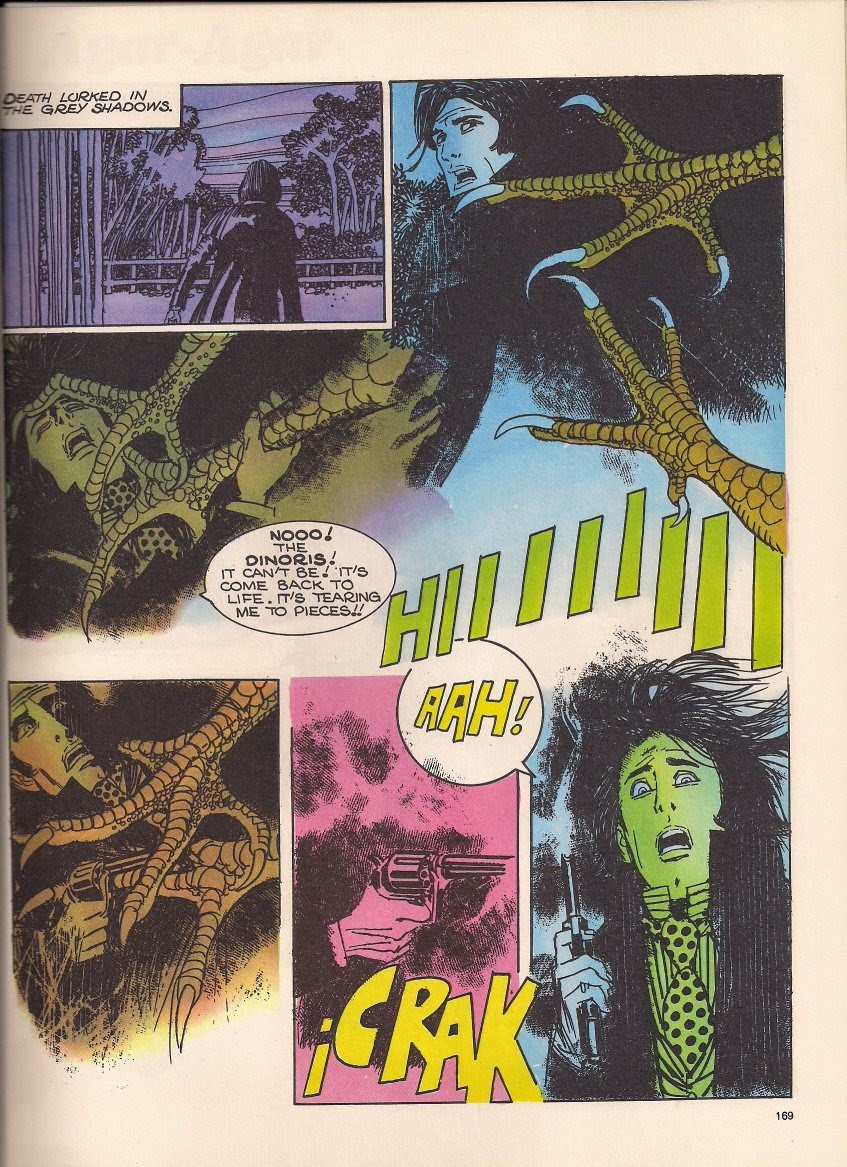 Next is Sir Leo in "The Mark of Death" by Jose Bea. Sir Leo is told of bizarre screechings that have occurred in the garden of a women named Miss Elizabeth. These have also been accompanied by murders, and the mark of a gigantic bird like creature. Sir Leo meets with Elizabeth, who looks like a normal young woman. He believes that the murders have been committed by a giant bird creature, like a Moa, but such creatures have been extinct for centuries. Leo decides to stand guard in the garden that night and is attacked by bird-like claws. He fires his gun and kills the creature, who is revealed to be Miss Elizabeth, with bird-like legs. A simpler Sir Leo story than usual, but another fairly good one.

Next is Agar-Agar in "The Martian Visitors" by Alberto Solsona. Fred Barber and his girlfriend Constanza tell Agar-Agar that Xanadu has been invaded by strange beings from outer space. Agar-Agar makes her way back there, finding the capital deserted and the city covered by weeds and vines. A martian takes her captive and brings her to his flying saucer. The martians keep saying the same thing, to reach for the skies or she'll be blasted full of holes. Agar-Agar realizes that the martians receive TV signals and are basing their words on that. She causes the TV signals to go away and the martians go away. Agar-Agar is greeted by her remaining sprites as the story ends. Yet another lackluster story, but at least the designs on the martians was interesting and a bit darker than the usual fare for this series. 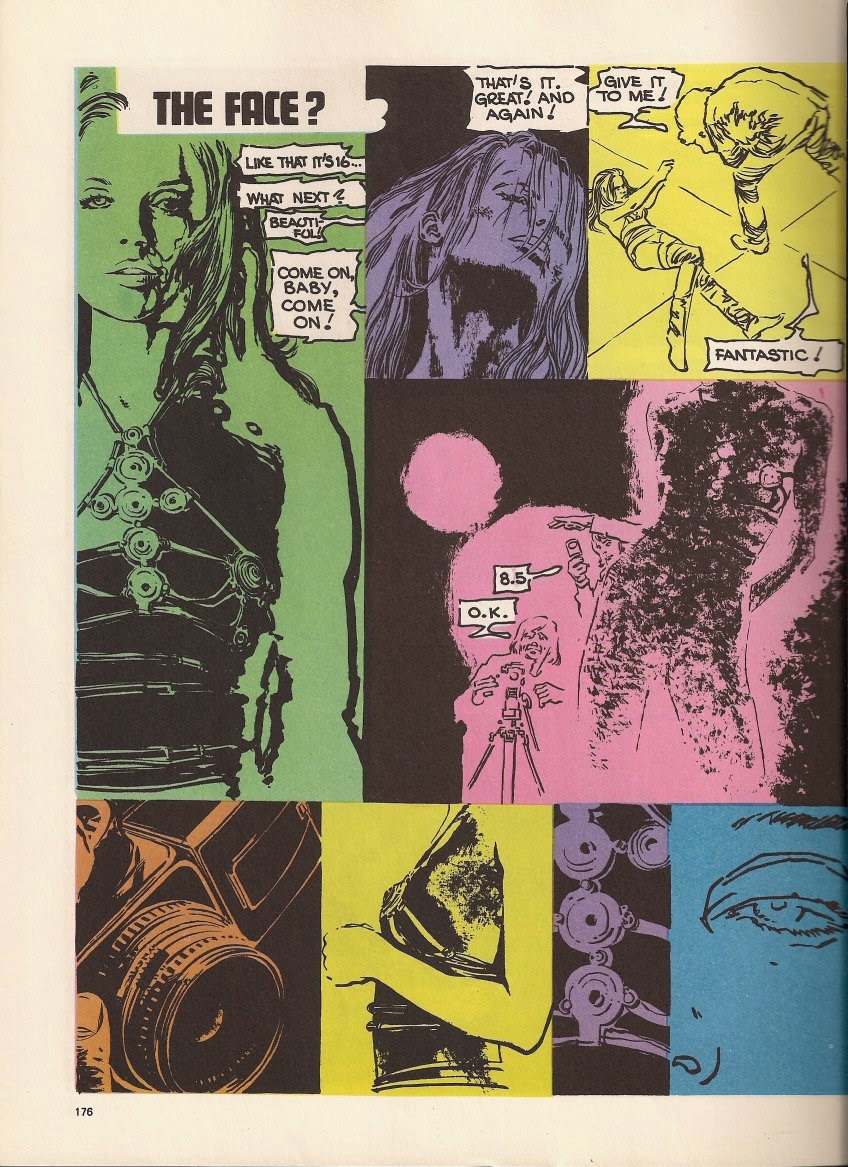 The issue wraps up with "The Face" by Enric Sio. A model, Pamela, has many pictures of her taken. The photoshoot over, she heads home. When the photographer, Frank, starts developing the photos however, he finds a strange occurrence, that her face and body appears completely blank in all of them. The only thing that appears is the clothing that she is wearing. He and his colleague find the photographs still interesting and believe it will work, but still wonder what is going on. Frank calls up Pamela saying it will be a hit, but it is revealed that her entire face and body have gone blank in real life as well. A strange, but rather non-scary feature from Sio this time.
Posted by Quiddity at 7:09 AM