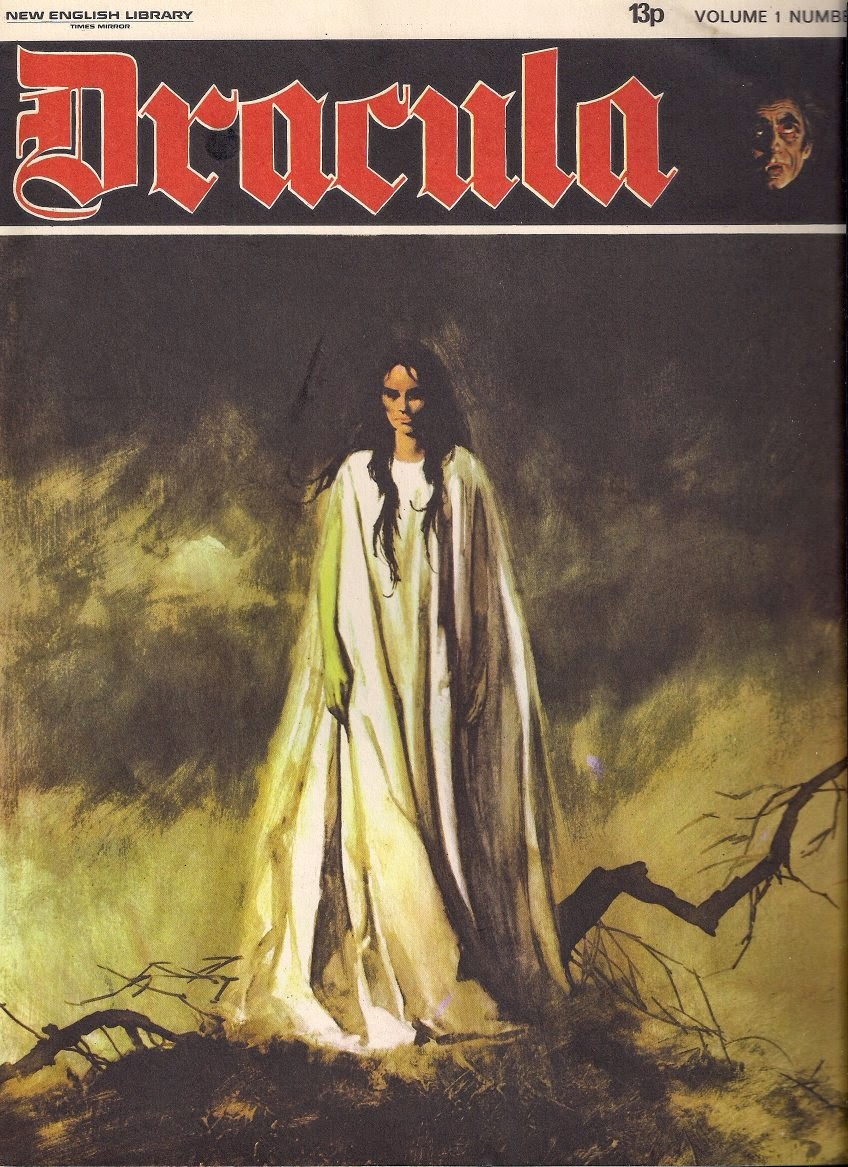 After a 1 issue absense, Enrich Torres returns to provide a haunting cover for this issue of Dracula. This would be his final cover for the magazine though (at least for the 12 issues produced in English).

First up is Wolff, in "The Daughter of the Witch" by Esteban Maroto. Where we last left off, Wolff's latest companion, Galadra had been slain. Wolff continues on and hears the scream of a woman, attacked by some lizard-like men. Wolff fights with them, but the woman tells him its useless as their wounds heal immediately after suffering them. Wolff grabs the woman and flees with her. He is under pursuit by the lizard-men however, who are riding beasts. The two of them get on the woman's horse, Bassora and she says they can fly to her father's castle. The woman says her name is Katerina and she brings him to a castle in the sky that looks like a serpent's head. Inside she introduces Wolff to her father, who Wolff recognizes as wearing witch's garbs. The father says they fled to the sky, but their people are sterile and hence his race is dying. Katerina wonders if Wolff can be their new hope, as does her father. It will be interesting to see if these new characters will remain a part of the story longer than the 1-2 issues at most that other characters have. 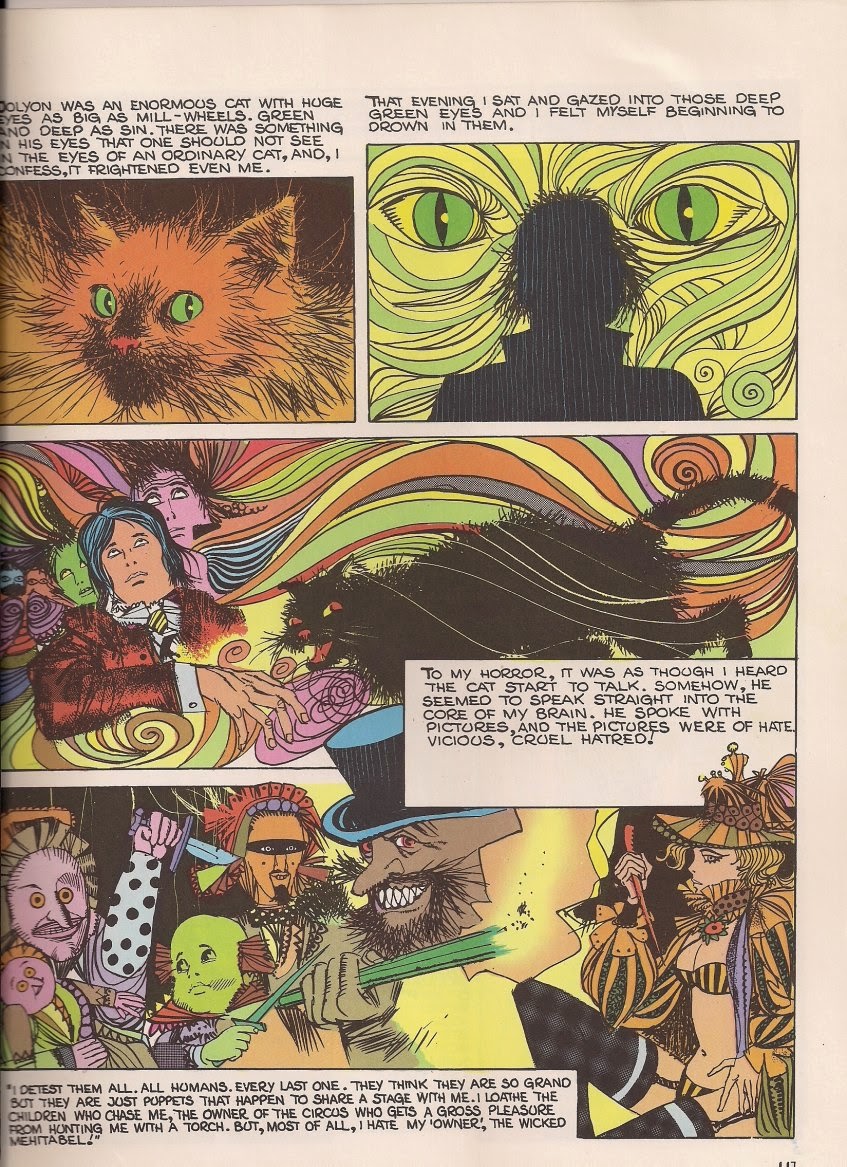 Next is the latest Sir Leo story, "The Cat", by Jose Bea. Sir Leo has never had time to have a pet, but is taking care of Jolyon, a cat that belongs to a friend of his. Jolyon has large, scary green eyes and Leo feels himself drowning in them. Jolyon starts speaking into his brain and Leo sees some very cruel images as Jolyon proclaims his hatred of humans, most especially his owner Mehitabel. Jolyon continues on and on about how he would like to kill his owner, children that have come across it and others. Jolyon, knowing that it won't be able to do this itself, orders Leo to head out with a gun and kill people for her. Leo instead shoots Jolyon, saying that he wouldn't have been able to do it had her lust for death not been so great. He thinks about how he doesn't need to go out of the way to find evil and how he'll explain this to Mehitabel. He pets another cat, who thinks about how foolish Leo is; all cats have such powers but they are not all as paranoid as Jolyon. For those who don't like cats or are scared by them, this story is in line with such thoughts. 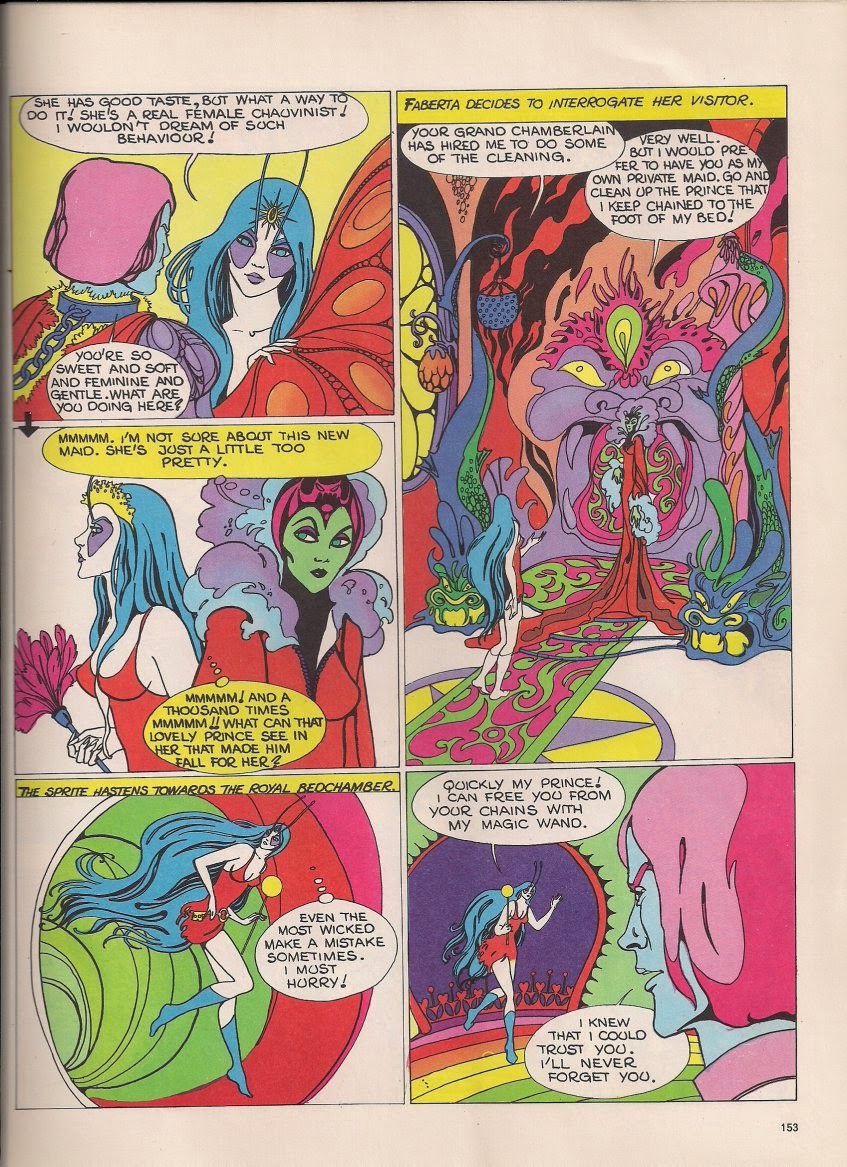 Next is Agar-Agar in "The Fairest of Them All" by Alberto Solsona. Having killed the superhero Superbat, Agar-Agar finds some butterfly wings in his home and puts them on, thinking she'd be a match for the evil witch Faberta. She makes her way to the castle of Lost Souls. There she meets the blue prince, who tells her that Faberta wrecked his marriage to Snow White and has seduced him with her irresistible charms. Agar-Agar becomes a maid for Faberta and is brought before her. When Faberta tells Agar-Agar to clean up around the prince, she tries to free him but is being watched by Faberta through her magic mirror. The room bursts in flames, but Agar-Agar waves her wand and water splashes throughout the room, putting it out. Faberta is then turned into a frog by Agar-Agar, who rides off with the prince on a unicorn. Yet another mediocre tale that is redoing things we've already seen before in this series. I'm looking forward to the next issue in which we don't have an Agar-Agar story. That said, at least the color in this story was better than usual. 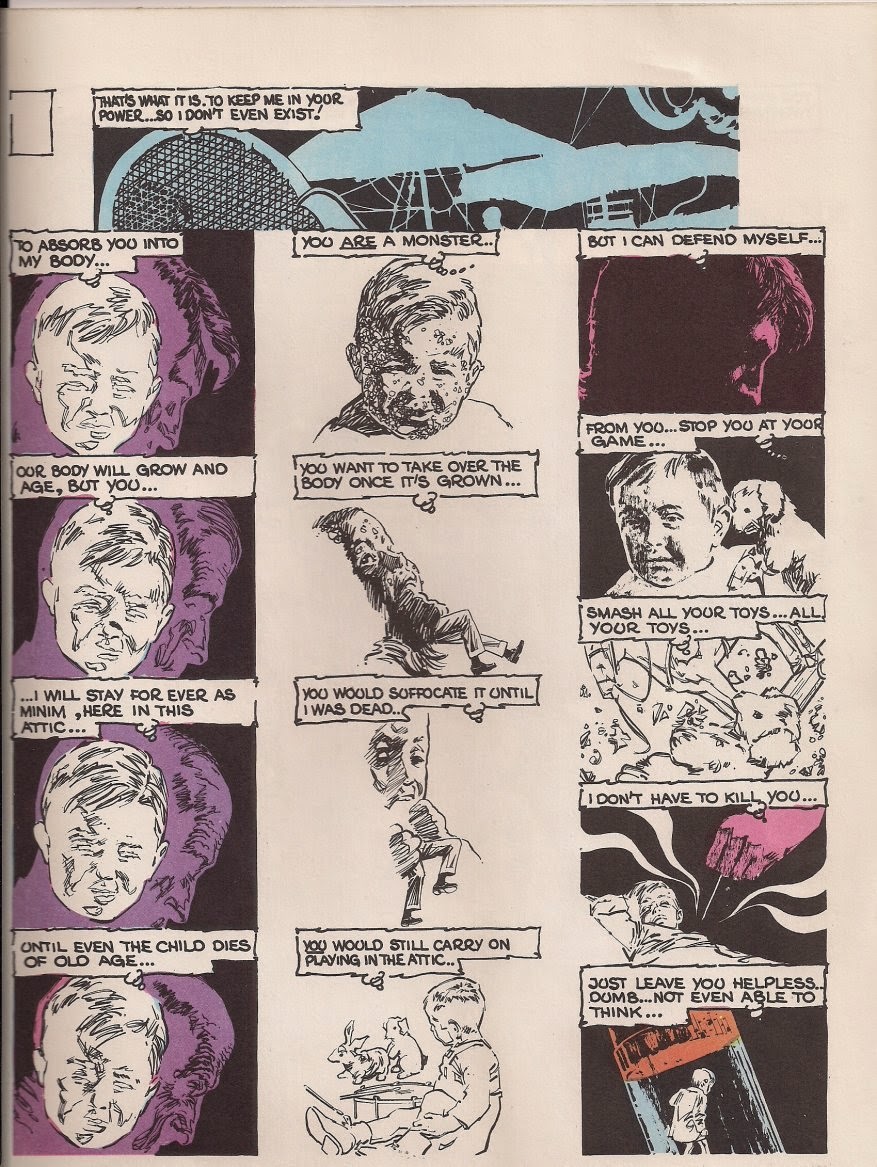 Last is "Minim" by Enric Sio. Another story of Sio's where it is kind of hard to tell what is going on. A man, the titular character, heads up to the attic and goes through some of his childhood toys. He thinks of himself as a child and how he didn't want to grow up. The child grows in size, while the man shrinks, and at the story's end he is locked up in a little cage by his childhood self. Some effective use of color here, with the adult being shown in color and the child being shown in black and white. Also, Sio uses himself as the model for the adult character. Still, I had a really hard time telling exactly what was going on in this story.
Posted by Quiddity at 10:05 AM