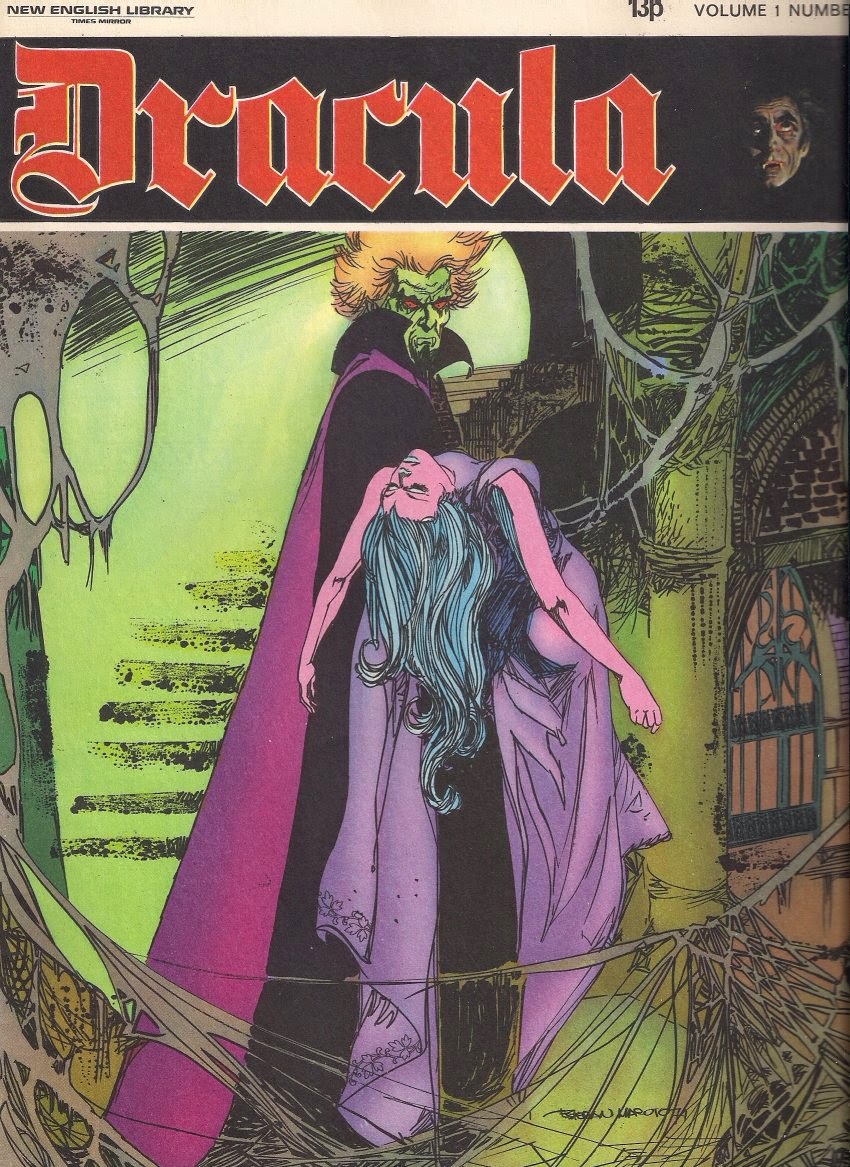 This issue of Dracula is the first to feature a cover by someone other than Enrich, in this case Esteban Maroto. In fact Enrich will only provide one more cover the rest of the way, while the magazine's interior artists get some chances to do the cover, usually in pen and ink instead of a painting. 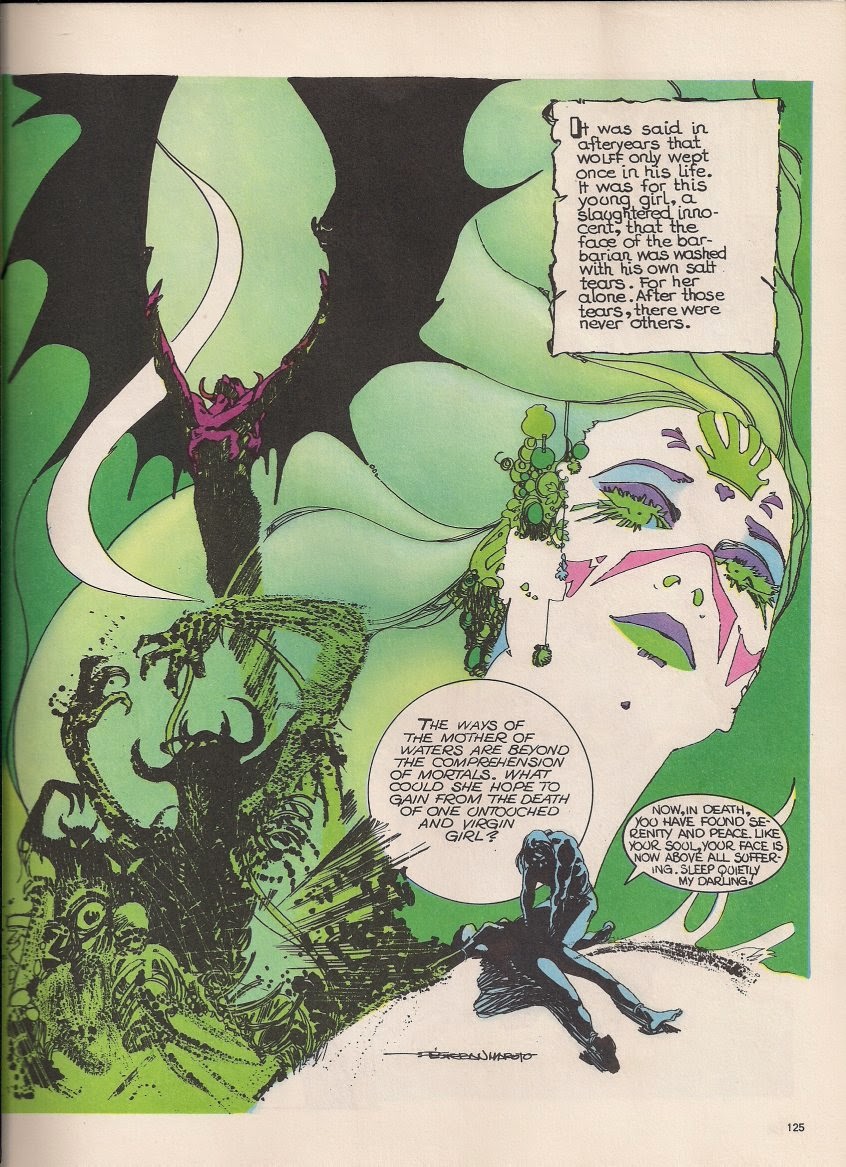 First up is Wolff in "Mother of Waters" by Esteban Maroto. Mitra, the mother of waters calls for Wolff to come closer to her, but Wolff refuses, saying he takes no orders from anyone. Having been denied for the first time, Mitra sweeps Wolff and Galadra into another dimension. Wolff awakens, surrounded by half-lizard, half-human creatures who have captured Galadra. The creatures sacrifice Galadra to Wolff's dismay and he breaks out of his chains. He fights the creatures, defeating them and embraces Galadra's body. As the story ends Wolff cries over her body and the narration says it is the only time in his life he had done so. The usual fare for the Wolff story in this issue, although we continue to get some strong art, especially on the final page. 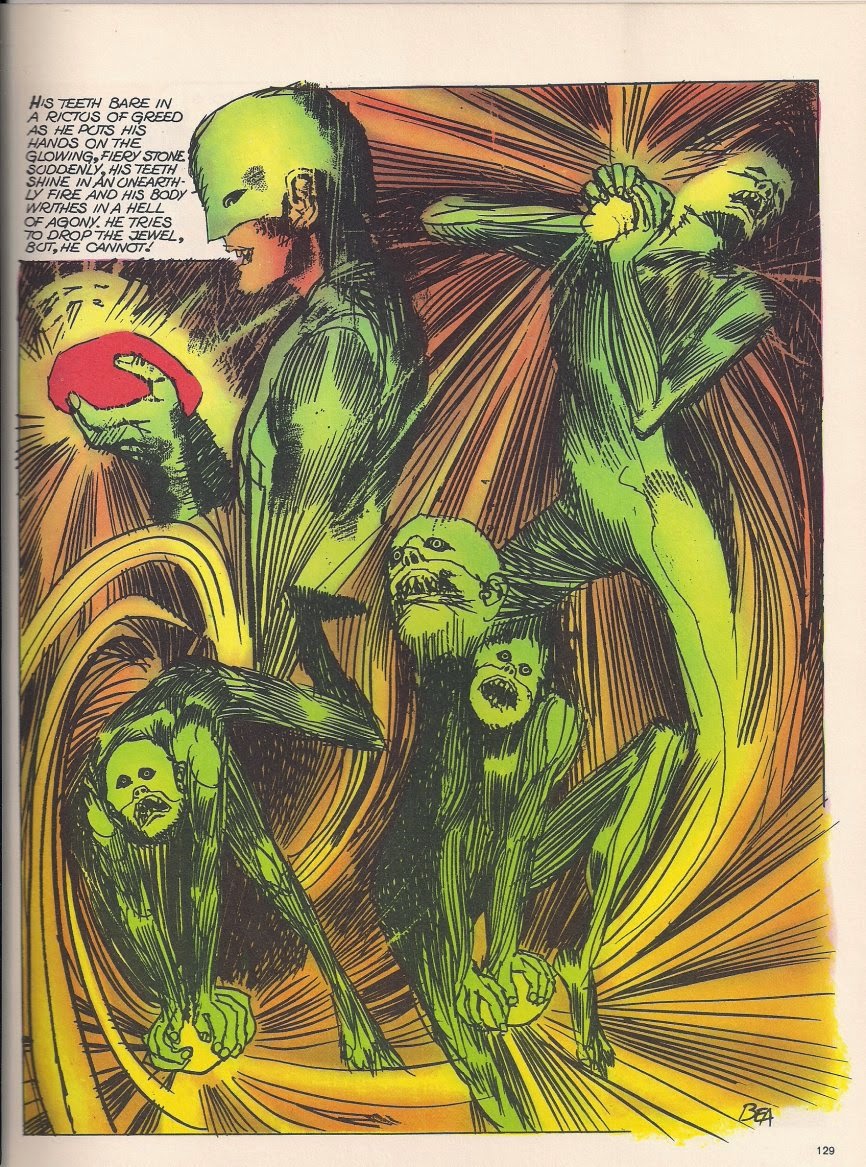 Sir Leo returns for the first time since issue 2, in "The Sea of Blood" by Jose Bea. The story takes place in Paris, in 1889. Leo has been asked to come and guard a jewel, the Sea of Blood. A man greets Leo as he arrives and Leo asks about the security over the jewel. The man says the jewel needs no protection and is its own guardian. Leo decides to remain on guard anyway. In the early hours of the morning, a masked thief arrives with a shotgun and orders the man who greeted Leo to bring him to the jewel. The thief picks up the jewel but it draws him directly into it. The next day, the man tells Leo of how the jewel drew the thief into itself. Leo realizes it glows red because of the souls it has drawn into itself. Bea provides his usual strangeness in style here when the thief arrives, with a bit more of a grounded story than the last few Bea stories.

Next is Agar-Agar in "Even Heroes Get Tired" by Alberto Solsona. Agar-Agar and Endymion travel into the paradise of Arcadia and its lovely garden. Soon Superbat, a man that looks like Superman arrives. Agar-Agar heads off with him and says goodbye to Endymion. Superbat flies her through the air of Arcadia to his temple, which looks like a super-advanced globe in the sky. Superbat promises to give her his autograph but heads out for a little while saying there is something he must attend to. Agar-Agar starts sensing that he isn't to be trusted, and is correct. She creates a double of herself while she is gone, made out of Marvelite, a substance fatal to superheroes. When Superbat returns he grows weak then melts. Some very obvious references to Superman in this story, and "Marvelite" is certainly a reference to Marvel. As usual, the Agar-Agar story is the weakest one here. 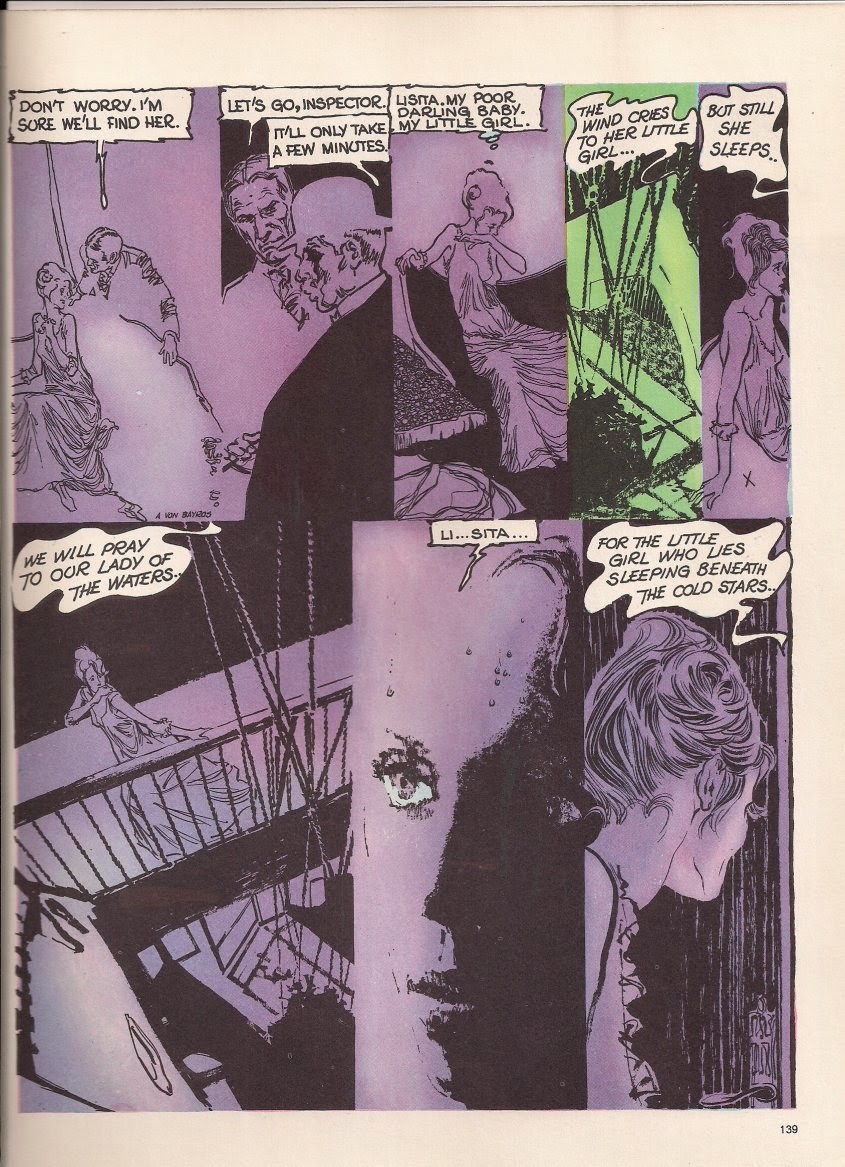 Last up is "Lisita" by Enric Sio. The titular character is a young girl singing up in her attic. Her parents, downstairs, wonder what she is up to and her mother calls up to her. The window breaks and when her parents rush up to the attic, they find that Lisita has disappeared. The police come and Lisita's mother hears her singing again upstairs. She heads upstairs and finds Lisita laying in a coffin. Her mother collapses, but Lisita awakens and starts calling for her mother. While the art is good as usual, it is hard to understand exactly what is going on with this story, especially the ending. Was Lisita a vampire? Did her mother die, or just pass out? I guess we'll never know, given the stand-alone nature of these stories. Also of note is that the story itself shows no title, but "Lisita" is displayed on the inside front cover of the issue.
Posted by Quiddity at 10:33 AM