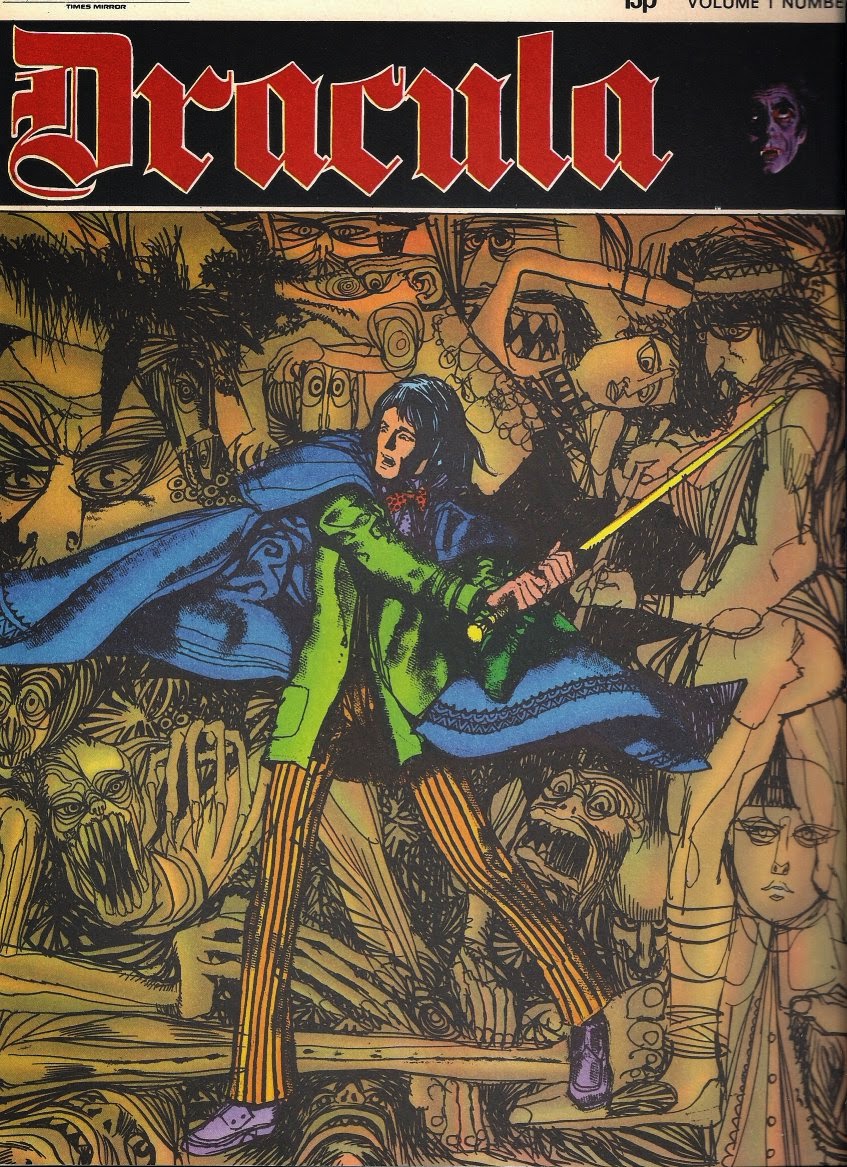 Today I'll be covering the tenth issue of Dracula. I have purposely skipped over issue 9 for now because the New English Library edition had a printing error whereby the content of issue 10 appeared in issue 9, and the content of issue 9 appeared in issue 10. Given the serials running in these issues, it made more sense to cover this issue first. I'll be covering issue 9 next time. This issue of Dracula features Sir Leo, as drawn by Jose Bea. As usual for Bea, it is some very bizarre artwork, with many scary looking creatures that Leo appears to be fighting off. 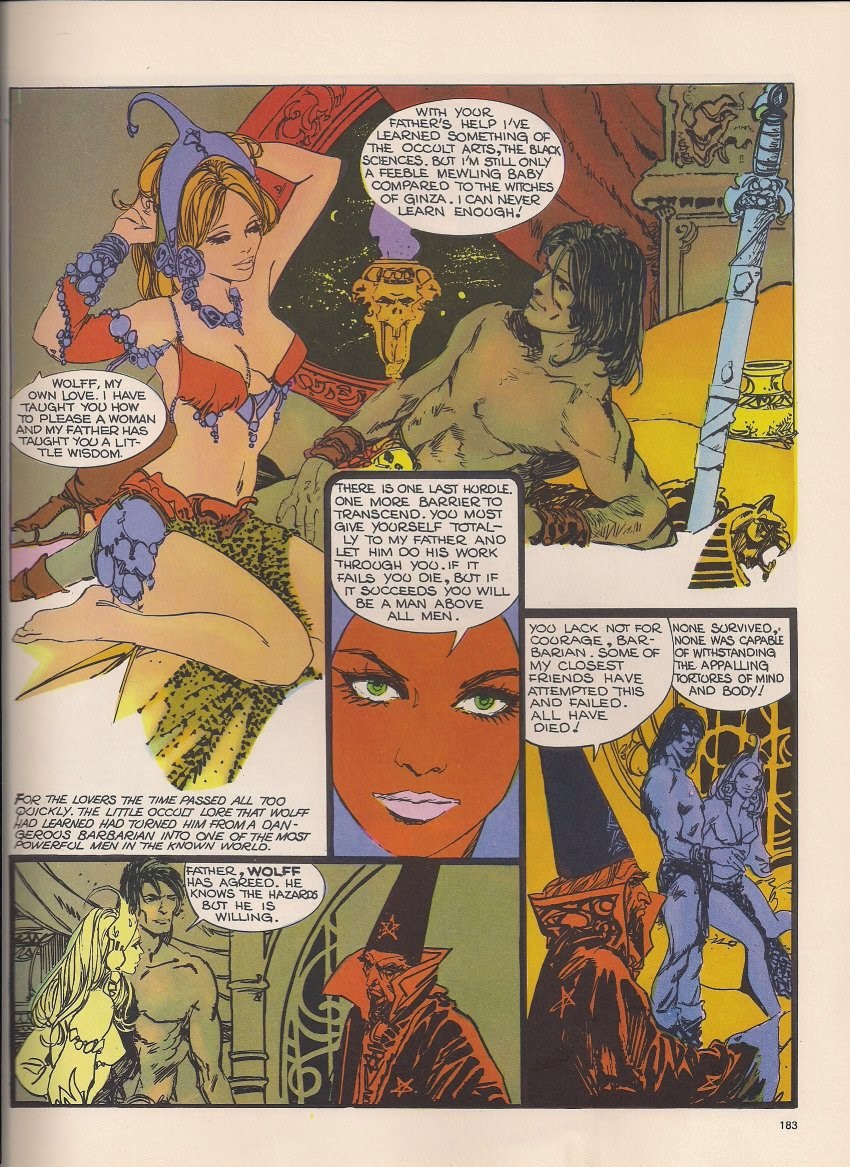 First is "The City in the Clouds", the latest Wolff story by Esteban Maroto. Where we last left off, Wolff had met Katarina and her father. Katarina tells Wolff how many of her people died during the journey to here from the swamps. Katarina speaks of the magic of her father, which Wolff doesn't care for, thinking strength is all that is needed. Katarina says she and her father have watched over him all this time and the two kiss. After supposedly having sex, Katarina asks Wolff to give himself to her father and let him turn him from the barbarian he is into one of the most powerfel men in the world. Wolff agrees to it even though there is a risk he could die if the magic fails. Katarina's father starts casting spells on Wolff which causes him to fall into a deep sleep. Suddenly their home is attacked by Sadya (last seen in issue 2), who arrives riding a large bird and accompanied by vultures. Here the story ends, to be continued next time. I'm surprised with how little action we saw in this story given how much of it we typically see in the Wolff stories. 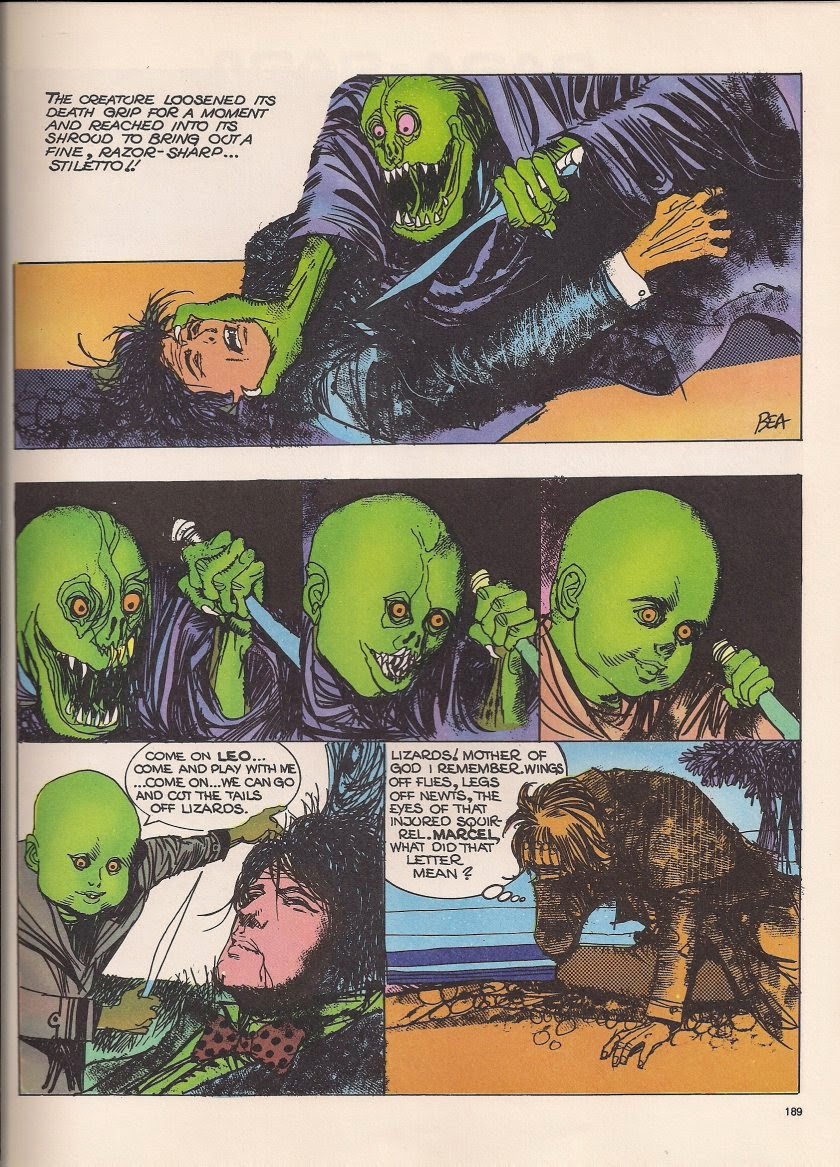 Second is Sir Leo in "The Closed Room" by Jose Bea. Sir Leo. Leo heads to the mansion of his old friend Marcel, who had destroyed his body and mind with alcohol. The letter Marcel sent to Leo said that he must destroy all his work. A strange looking green skinned boy with a stiletto appears off in the distance, but then vanishes. Suddenly a hideous green creature attacks Leo. He is about to stab Leo when he transforms into the boy, asking Leo to come play with him. Leo realizes that he must go to the basement where they kept their treasures as kids, thinking Marcel will be able to find peace in his grave once he destroys whatever is there. Leo makes his way to the basement as the story ends, where a picture of Marcel, the green skinned boy appears on the wall. This story ends rather abruptly, making me wonder if there was an intended second part (if there was, it never appeared in this publication). Still, this is an effective and scary tale. Marcel reminds me of the alien creatures in the animated film Fantastic Planet. The movie came out in 1973, which dates it after this issue, making me wonder if any of Bea's work here was an inspiration for the design.

Next is Agar-Agar in "The Forest of Life and Death" by Alberto Solsona. Agar-Agar says goodbye to the blue prince and meets a red haired man named Fred Barber. He says he was living a normal life in the U.S. but suddenly woke up in this world. The two sleep on the ground for a while but when they wake up, vines have grabbed them. Some plant like women try to seduce Fred, with no success. Agar-Agar is taken away from some bizarre looking humanoid creatures known as Entlings and held prisoner along with another woman who is in love with Fred. The creatures are about to kill her and Fred, but Agar-Agar breaks free and turns them into normal trees. Agar-Agar heads off with Fred and his lover as the story ends. "Entlings" are clearly a reference to Ents from the Lord of the Rings. As usual, this is a weak and boring story with an expected ending. The art is at least a little better than usual. Last is "Boutique" by Enric Sio. A rather simple tale, with dialogue only appearing on the last page, but the best story from him since issue 6. A glass hand is on a table in a boutique. It suddenly becomes alive and starts growing into an entire body. A man comes by and chops the hand off however, putting it back on the table. He grabs the remains of the body and throws it out, talking about how frustrating it is that the hand keeps doing this every night. Some strong art here and a simple, yet effective concept. It reminds me of a sequence from the movie Hellraiser where an entire body starting growing from just a heart.
Posted by Quiddity at 3:25 PM