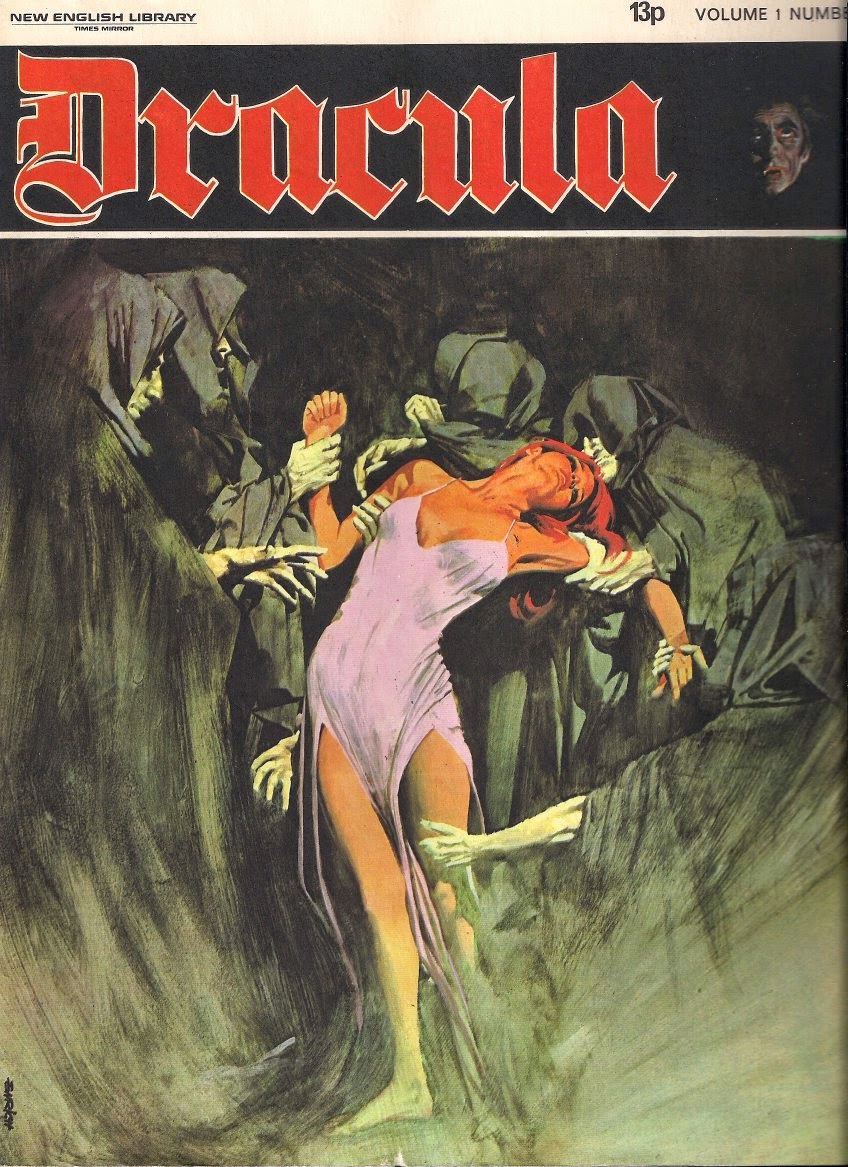 Another issue of Dracula that spurns the formula; we once again have only 3 stories here, one of which (Jose Bea's this time) is 10 pages instead of the usual 5. That said, Enrich provides the cover painting as usual. 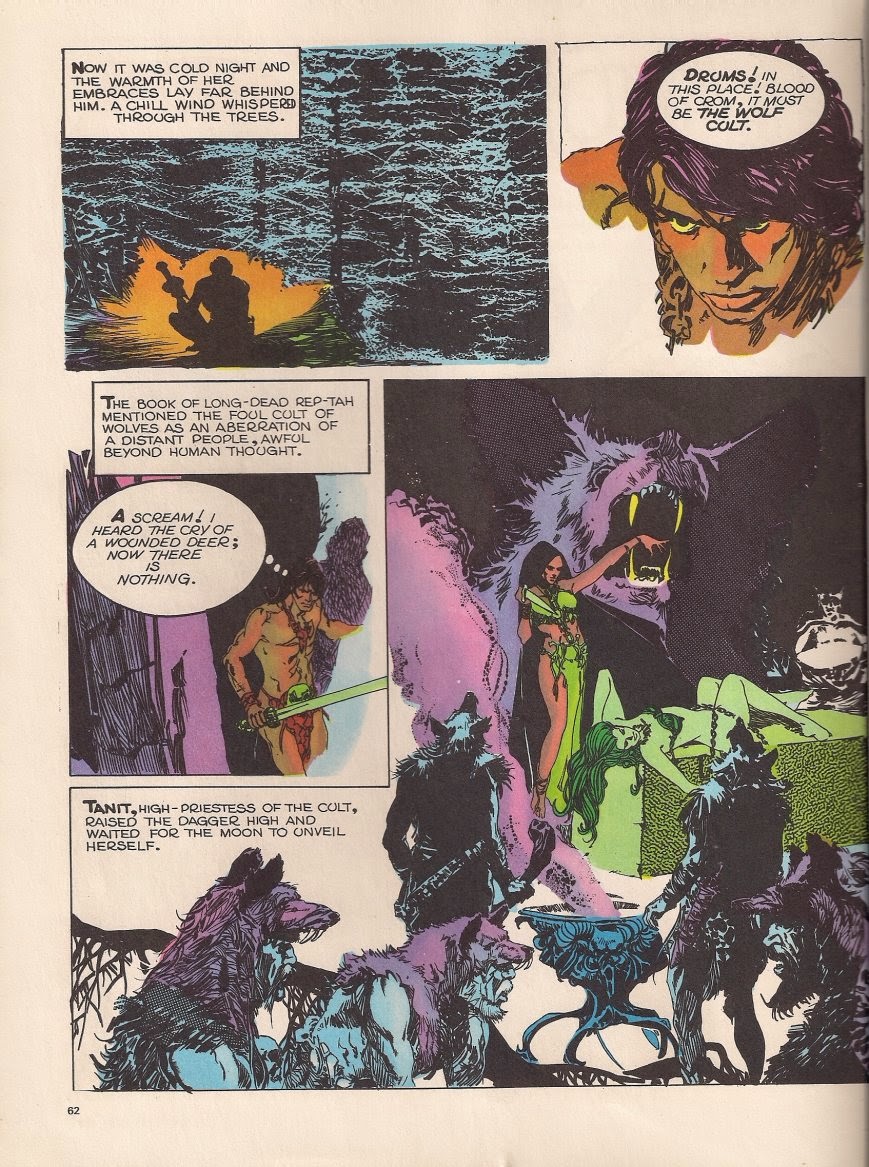 First up is the latest story in the Wolff series, "The Night of the Werewolf" by Esteban Maroto. The first page of this story was used as the cover for the Dracula book published by Warren. The red sorceress has disappeared, and Wolff stays in the woods where he hears drums of a Wolf Cult, as well as a scream. Nearby, Tanit, high priestess of the cult performs a sacrifice as Wolff watches. Tanit senses Wolff and several men, wearing wolf pelts come after him. Wolff fights and defeats them. Tanit stabs herself as Wolff approaches her alter and changes into a snake which attacks him. Wolff manages to kill her, but turns into a wolfman as the story ends. "Wolff" finally features the creature that inspired the series' name; this story features some similar artwork to that later used by Maroto in "A Most Private Terror" from Creepy 52, a story that also featured a werewolf-like creature. 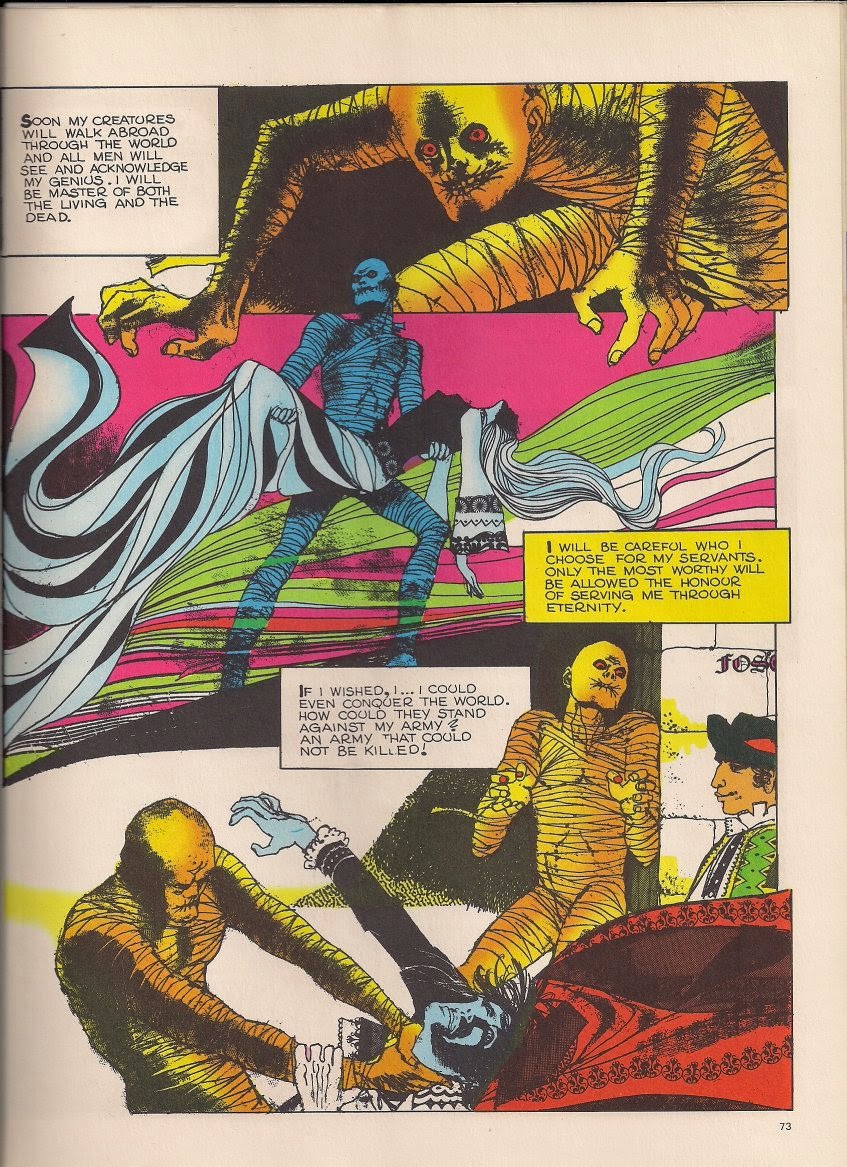 Next is "The Mummy", another stand-alone story by Jose Bea. This story takes place in London in 1750. A man named Lord Harrington and his hunchbacked assistant Cornelius steal a perfectly preserved mummy (that of Nefer, son of Cleopatra and Mark Anthony). Harrington speaks with colleagues at a dinner who are wondering about the theft, telling of how he has performed experiments to halt death and decomposition. Having discovered that the Egyptians had mastered halting decomposition he has secretly stolen the mummy. He dismisses any talk about the spirit of a person having left them once they have died. One of Harrington's dinner guests sneaks into his mansion where Cornelius kills her. Harrington has her life force drawn out of her, which he injects into the mummy. Harrington believes he'll be able to create an army of the dead and conquer the world. The mummy awakens, but its hands detach from its body and immediately strangle Harrington. This story has a rather abrupt ending, but some very good art by Bea, in particular the introductory page, which is a full page spread of the streets of London in 1750. Also, the mummy is a scary one. 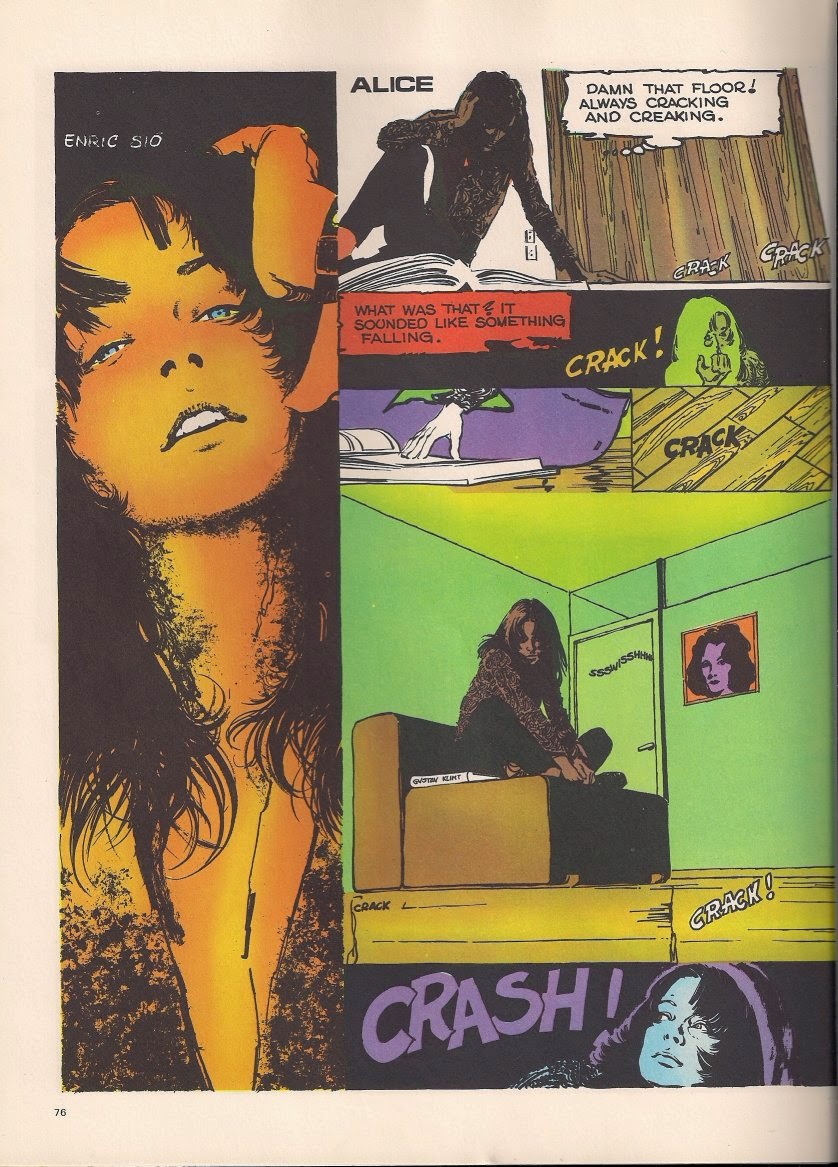 Last up is "Alice" by Enric Sio. Not much of a plot to this story, but a hilarious ending. The titular character lives alone in a home where there is a lot of creaking and cracking in the floor, walls and ceiling. As the story continues, the walls start cracking and water seeps through. The window breaks as well. Alice thinks that she will be safe if she hides in the fireplace, only for it to collapse on top of her, crushing her. Again, not much of a story here, but the idiocy of the main character and the funniness of it makes up for it.