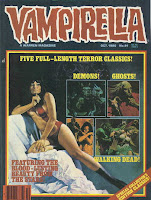 This issue of Vampirella, from October 1980 is an all reprint issue featuring various Vampirella stories. The cover is a montage of various past Warren covers (featuring artist Enrich and Sanjulian, from Creepy 51, 58 and 60, Eerie 41, and Vampirella 40 and 57) with new artwork from Enrich.

First is "The Carnival of Death" by Jose Gonzalez (art) and Mike Butterworth (story, as Flaxman Loew), from Vampirella 34. Traveling in Venice, Vampirella and Pendragon meet the Zymer, a cruel man who Vampirella gets upset at after he forces participation in a russian roulette type game. Meanwhile a rich couple invites many old friends to a ball they are having, and an invitation ends up going to Zymer too. A large group heads to the ball, where they find that the other guests are actually corpses! Vampirella finally snaps, killing Zymer by draining his blood. They depart, leaving the rich couple with their dead friends.

Second is "The Human Marketplace" by Jose Gonzalez (art) and Gerry Boudreau (story), from Vampirella 53. Vampi is caught with her forged passport on the US border and agrees to work undercover in order to get off the hook. She is used to go undercover to thwart Algernon Silver, a man who plans to sell women to various world leaders and use them to kill them all at once. As usual, Vampi is able to save the day while Silver's own men also end up 'screwing' up his plans. Pretty good story with gorgeous art by Gonzalez.

Third is "City of Ghosts" by Jose Gonzalez (art) and Roger McKenzie (story), from Vampirella 57. Vampirella is stranded in the desert and comes across a deserted town where she meets her husband from Drakulon, Tristan. Adam arrives but is shot by him. Eventually it ends up that it was all an illusion and Vampi is reunited with Pendragon and Adam.

Fourth is "The Headless Horseman of All-Hallow's Eve!" by Jose Gonzalez (art) and Bill Dubay (story) from Vampirella 56. Some extremely good art by Gonzalez here, one of his best Vampirella stories ever. Vampirella and Adam try to solve the mystery of a headless horsemen who is kidnapping young woman. Using Vampi as bait they find the truth, it is actually some men who are trying to sell the women into slavery. Vampi and Adam are able to stop their operations.
Fifth is "Pendragon's Last Bow" by Jose Gonzalez (art) and Bill Dubay (story) from Vampirella 59. Vampi and Pendragon come to a new town where some murders have been taking place. Pendragon meets a beautiful woman Rosie, the owner of an antique shop directly above the place where the corpses have been found. The Van Helsings arrive and find that Rosie is a succubus, who along with her brother is responsible for the murders. Rosie and her brother are killed, but she saves Adam, who had been attacked by her brother before she dies.
Posted by Quiddity at 7:52 PM