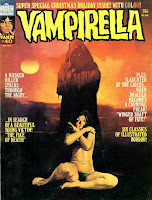 Enrich provides the cover for this issue of Vampirella, featuring Vampi and a dark, caped figure. This issue is cover dated March 1975. Ken Kelly provides another cover on the back of the issue, and Jose Gonzalez provides his usual one page Vampirella intro in the front inside cover. This issue was one of the first issues of Vampirella I ever read, so still remains somewhat memorable to me for that reason.

First is Vampirella in "The Nameless Ravisher!" by Leopold Sanchez (art) and Mike Butterworth (story, as Flaxman Loew). This story continues from the previous one, where a man who hunted human heads wanted to take Vampirella's head. He was killed at the end of the story, being decapitated. In this story we meet his two sisters, a pair of crazy old women who want revenge on Vampirella. They summon a demon, the Nameless Ravisher, which takes the shape of various entities, mostly those based in nature. The Nameless Ravisher attacks Vampi, first by flooding the room she is in, then taking the shape of a tree that attacks her. Eventually Vampirella defeats it, and the two old women are done in by the corpse of their brother. An odd Vampirella story, but Sanchez's art is a nice, rare alternative to the usual artwork on this series (not to say the usual artwork is bad, Gonzalez and Mayo were usually great. Just enjoyed someone else drawing Vampi for a change).

Second is the second part of the three part Dracula series, "The Winged Shaft of Fate" by Esteban Maroto (art) and Gerry Boudreau (story). Color is provided by Michelle Brand. This story continues from the previous one, with Dracula now having a female vampire companion. Similar to the previous story however, this story primarily focuses on another couple that becomes involved when the carnival stops by. A man steals a large sum of money and plans to meet his lover, but the lover ends up getting bitten by Dracula. The man ends up leaving with another woman instead when his lover doesn't show up, only she does, as a vampire, killing them both.

Third is "The Face of Death!" by Ramon Torrents (art) and Carl Wessler (story). A man is angry at a former lover who has moved on and married someone else. He seeks to get back at her by attacking her during a halloween party. When he realizes that the party is only for people who bring children, he finds a boy alone on the street, Mort, and they go in togehter. Mort keeps trying to hang out with the man, who finally finds his former lover upstairs. When he is about to attack her however, he trips on her kid's blocks and falls out the window. Mort comes to see him, and reveals that he is death.

Fourth is "The Man Who Never Was" by Fernando Fernandez (story & art). Fernandez turns out a very interesting sci-fi themed story here, but his art is absolutely horrible compared to his normal work. Quite a dissappointment from someone who is usually so good. Not that its horrible compared to some other artists seen over the years in Warren publications, but for him, a big dissappointment. Anyway, on to the story, which is quite good. A man awakes after some sort of coma or unconscious state to find himself in a society that doesn't recognize him. His cash is worthless and those he talks to refer to society rules that he has no familiarity with. Further investigation by the police and doctors realize that the man has no record of existing. At least that's what they tell him. In actuality, they realize that the man existed in society nearly 200 years ago and must have been in some state of suspended animation. Rather than accept him into their society, fearing he may cause others to believe in the freedoms that no longer exist, they inject him with a substance that causes him to go unconscious for another 50 years, so those in the future can deal with him instead.

Fifth is "The Time Eater" by Paul Neary (art) and Jack Butterworth (story). Another sci-fi themed story that is very interesting and unique. One of Warren's most unique stories in fact. The Time Eater of the title is an entity that exists out in space, consuming time. As the story begins, the time eater is quickly reaching the point where it has consumed all future time. As a result, it has to start eating the past. We see the Time Eater consumer the past, causing time to go back further and further. A spaceship that approached the Time Eater lands back on Earth, then is deassembled. People who have died come back to life, then grow young, and eventually return to their mother's womb. Humankind de-evolves as does all other life. Eventually the Earth itself ceases to exist and the universe slowly shrinks until it too is gone. At this point the time eater has eaten all time that has ever existed and soon starves to death. A gaseous particle breaks off the time eater, causing the universe to slowly start reforming again. Time once again starts to pass by, the universe slowly returns to normal and the time eater eventually comes back to life to start the process all over again.

Last is "Home For the Holidays" by Luis Bermejo (art) and Budd Lewis (story). This is a Christmas themed story. It is told in two parts, very similar in fashion to the story "Bless Us Father" from Creepy 59. On the left side of each page we see a little girl and her nanny, who get ready for Christmas day and the return of her parents. On the right side of the page we see the parents boarding a plane to head home. The wife seems quite upset with the husband, who appears to have been recently released from prison. The husband realizes that a fellow passenger has a gun and tries to stop him. This results in a confrontation in the cockpit which results in the plane crashing... right into the home where the daughter and nanny are. Quite a bleak and depressing ending compared to many of the other Christmas themed stories that appeared in the Christmas issue of Creepy that came out the same time as this issue (issue 68).