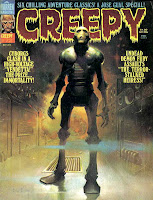 Ken Kelly provides a fairly good cover for this issue of Creepy, featuring a robot in a misty hallway. This issue is cover dated July 1975, and is an all Jose Gual issue. Jose Gual was a fairly good, but somewhat underrated artist at Warren who also did a lot of work for their chief competitor, Skywald. Wish he had done more for Warren than he did (in fact, Gual did only one more story for Warren after this issue). Not just good art, but fairly good stories throughout the issue too. Berni Wrightson provides a frontis of Uncle Creepy, the only interior art not by Gual.

First is "Vendetta", written by Rich Margopoulos & Gerry Boudreau. Howell Hayes, head of a large company tells an entire factory of employees that they are laid off. One of the laid off workers, a one armed man named Frank Troughton convinces fellow laid off employee Walter Hargrove to transfer his brain to an indestructable robot so he can get revenge on Hayes. Troughton storms into Hayes's mansion, only to find that Hayes is also a robot, who quickly destroys him. Hayes's energy completely runs out however due to contaminated cartridges produced by the closed down factory. Hargrove is found outside and as a mechanic is permitted to go inside to fix Hayes. He instead destroys him, repairs Troughton's robot body and places Hayes's face on him so he can take over his life.

Second is "Malocchi!" written by Don McGregor. This story was originally written and produced a couple of years ago, having been advertised on issues of Creepy as far back as 1972. A man, Troy Rutherford suddenly finds himself on fire and dies as his whole house burns down. It was exactly what he had told some psychic phenomena experts about days earlier, but they didn't believe him. The two experts, regretting that they didn't believe him track down the source of the incident to Madame Swambada, a psychic. When Swambada tries to poison one of them, they are able to prevent the same fate from happening to them and get her arrested.

Third is "Lick the Sky Red", written by Doug Moench. A psychotic arsonist sets a lab ablaze. One of the men is severely burned in the face, which ruins his life as he's laid off from his job and evicted from his apartment because of it. He stays in a shack and gathers some dynamite which he plans to use to get revenge on his boss. He meets a beautiful blind woman outside however and decides to forget the whole thing. The arsonist meanwhile starts a fire in the cabin and ends up getting blown up by the dynamite left there.

Fourth is "The Terror Stalked Heiress", written by Carl Wessler. This story is part of the series 'It' which appeared primarily in Eerie throughout 1974 and 1975. The series stars a corpse named Timothy Foley who comes back from the grave to help his niece Jill. Oddly for some reason in this story the family name of Foley is changed to Redey. Jill gets attacked by some monsters that live in a mirror. It arrives and saves her, and they cover the mirror with a blanket so the monsters can't get out. Later some men come to the house to kill her so they can take over her home, and It arrives once again and saves her, while the monsters from the mirror kill the criminals.

Fifth is "The Bite", written by Jeff Rovin. A city is plauged by a series of murders from a ghoul. A well known football player is suspected of the crimes due to part of his jersey appearing. In actuality he is being framed by two friends of his, who are being paid by the actual killer, a young woman our protagonist met just earlier. The football player is hauled off to jail while the ghoul moves on to another town to consume more victims.

The issue concludes with "Labrynth", written by Gerry Boudreau. A trucker, Sam, stops off at a truck stop he frequents. Inside he meets Dierdre, an emotionless women who joins him on a trip to Mexico. There they visit the catacombs and head deep inside with a guide. Dierdre admits to being in love with him but he has no interest in her so she kills their guide, preventing him from being able to leave her.