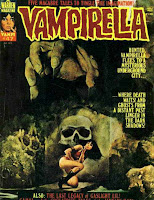 Enrich provides the cover for this issue of Vampirella, dated December 1975.

First is "Mother's Coming Home" by Gonzalo Mayo (art) and Bill Dubay (story). Taking place during the period of time while Pendragon and Conrad are supposedly dead (found out not to be the case two issues later), Vampirella is away on her out trying to avoid the authorities. She comes across Barbara, a young woman who acts as if her dead mother is still alive. It is later revealed that Barbara was in a mental institution and was the one who murdered her mother. Vampirella sucks the blood from her, killing her, the first time she does so without any guilt.

Second is "The Secret Legacy of Gaslight Lil'" by Luis Garcia (art, miscredited as Jose Garcia) and Bill Dubay & Victor Mora (story, Mora uncredited). This story was originally printed in Europe in the publication Pilote and appears rewritten here. It features a woman who works as a prostitue under Gaslight Lil of the title and gains the powers of a succubus. She partially drains the life of two men who come by and also controls their minds, causing them to head out with her and become outlaws. A fairly good story, enhanced much by Garcia's terrific art. Unfortunately this would be his last story published in a Warren magazine. One of the characters in this story is visually based on the actor Paul Newman.

Third is "Children of Wrath" by Ramon Torrents (art) and Gerry Boudreau (story). A wealthy man leaves his job and fiance to join the Brandon Abbey monastery, having to pay $1 million dollars to join. His fiance Elizabeth, very upset, heads there himself and sneaks in, being captured. There she finds that the abbey is actually some sort of bordello where men live out their every whim, particularly with the women they have captured there. She is kept there herself and raped by those there. Eventually she is able to escape when her fiance tries to kill her, taking his knife and killing him. Then she and the other woman kill all those there. In the epilogue we find the opposite occur, as a woman heads there to join the Convent of St. Elizabeth.

Fourth is "Gamal and the Cockatrice" by Auraleon (art) and Bruce Bezaire (story). A terrific story, one of the best Warren stories of all time. It is included within the top 25 stories in the Warren companion. A tribe in the dessert is told by one of their members, Gamal, that he has killed the cockatrice, the half chicken/half snake creature that kills anyone who looks at it. Using a complex story he tells them how he killed it. When the man offering a reward for the death of the creature refuses to pay, Gamal admits that he also kidnapped another cockatrice and that he will unleash it unless they give him a third of the tribe's wealth and three of their women. They relent to his demands, and it is never really revealed whether he actually killed or captured a cockatrice.

Last is "The January Man" by Luis Bermejo (art) and Gerry Boudreau (story). This story features a group of boys who meet the January Man, a mysterious man who brings them to another world. He claims to be the guardian of January, and that when he dies he will have to choose another guardian. Back in the real world everyone gets worried over the missing children. The children defeat the evil Summer Guardians, but two vanish while doing so. The January Man helps the remaining children bring them back to life. Afterwards they return to the real world , with one of them made the guardian for next January. The light hearted nature makes one wonder whether this story was originally intended for a Christmas issue.
Posted by Quiddity at 9:50 PM