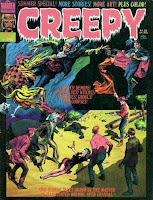 This issue of Creepy is a reprint special dedicated to Reed Crandall. The cover is a montage of various drawings of Crandall's from previous issues, in color. This issue is dated October 1975.

First is "Vampires Fly At Dusk" by Reed Crandall (art) and Archie Goodwin (story), from the first issue of Creepy. The story takes place in a town plagued by murders, suspected to be by a vampire. A man is suspected to be a vampire, particularly by his wife who finds that he'll only let her do things at night. One night she finds him missing from his study and she pulls back a curtain, revealing the sunlight which she hopes to destroy him with. Only it ends up that she was the vampire; while he was killing the people in the town, he was feeding the blood to her in her food. Due to the sunlight she dies.

Second is "Curse of the Full Moon!" by Reed Crandall (art) and Archie Goodwin (story), from Creepy 4. A rich man, Henry, has his coach attacked by a wolf, and his driver killed, He encounters an old gypsy woman who tells him that it is a werewolf, and he is to be the creature's next victim. Henry plans to hunt the werewolf with his two hunting buddies and when the werewolf attacks him, he kills it with a silver bladed knife. Because he was bitten however, he becomes a werewolf himself and his killed by his friends.

Third is "The Cask of Amontillado!" by Reed Crandall (art) and Archie Goodwin (story), an adaption of the classic Poe story. This story was originally published in Creepy 6. The story features a man who encloses a colleague of his in a brick tomb. Goodwin adds a new ending to the story, where the protagonist, now an old man, returns to the scene of the crime and is killed when the chamber floods and the corpse of his colleague pulls him under water.

Fourth is "Hot Spell!" by Reed Crandall (art) and Archie Goodwin (story), from Creepy 7. A devil worshipper is captured by the townfolk and set on fire at the stake. Before he dies however, he curses them. Years pass and his descendants all pass away. The town however has multiple people who die due to fire. The townfolk think that an artist from out of town is a descendent of him, so they set his house on fire, killing his wife, then kill him too. But the ghost of the devil worshipper appears, saying that they'havea become as evil as he, and sets them aflame.

The next story, in color, is "The Beast on Beacon Street" by Reed Crandall and Budd Lewis. This story is a rewriting of the story "Wrong Tennant" from Eerie 24. A pair of ghost hunters arrive to help an old woman eliminate a ghost from her house. They initially have difficulty and one of them is killed, but the ghost is able to be stopped using electricity. Only it ends up the ghost was actually a victim of the old woman, who is a vampire and kills the last remaining ghost hunter.

Sixth is "Hop Frog" by Reed Crandall (art) and Archie Goodwin (story), an Edgar Allen Poe adaption from Creepy 13. It features the title character, who is a midget that is constantly teased and absued by the king and his men. One night Hop Frog convinces the king and two friends to dress up as gorillas to scare some guests. Hop Frog takes this opportunity to bind them then set them all aflame, and leaves the castle for good.

Seventh is "The Squaw" by Reed Crandall (art) and Archie Goodwin (story) is next, a reprint from Creepy #13. This story, which is an adaption of a Bram Stoker story features a man who kills a kitten by accidently dropping a rock on it. The mother of the cat follows him as he goes to see a torture chamber and steps into an Iron Maiden. The cat jumps at the tour guide holding the iron maiden open, resulting in it shutting on the man, killing him.

Next is "Frozen Fear!" by Reed Crandall (art) and Archie Goodwin (story), from Creepy 16. A team of explorers find a frozen warrior. One of the explorers is after the wife of another. It ends up that he is the descendent of someone known to the frozen warrior, who comes alive and kills him.

Last is "Keep Your Spirits Up" by Reed Crandall (art) and Bill Parente (writer), from Creepy 25. The story surrounds an artist who travels to the spirit world in order to get inspiration. The spirits don't like him being there, and he eventually ends up going there so much that he is killed by them.