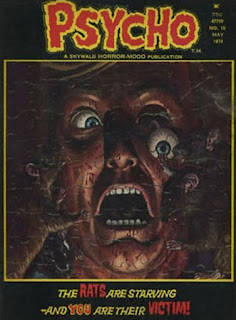 Xavier Villanova provides the cover for this issue, cover dated May 1974. An interesting concept, in the form of a jigsaw puzzle!

First is "The Macabre" by Al Hewetson (story) and Ricardo Villamonte (art). Movie actor Basil's agent comes up with an idea for him to hype up his role as vampires by having him pretend to be a vampire in real life, carrying around a coffin with him. But this leads to a real vampire encountering him, and when he discovers it is all a gag, the vampire bites him, turning him into a vampire for real! Basil flees from society, living on an island and only succumbing to his urges to bite someone occasionally. He eventually comes up with a cure for vampirism and drinks it, turning himself back into a regular human. Unfortunately for him at that very moment a mob of villagers have come to the village and slay him with an ax! Villamonte's art as often is the case leaves a lot to be desired, but this was a fairly strong story with a hilarious ending.

Next is a one page pin up of Lady Satan as drawn by Pablo Marcos. I'm not sure why we are featuring her in Psycho when she usually appears in Scream.

Next is "The Rats" by Al Hewetson (story) and Felipe Dela Rosa (art). Our protagonist, Syd, has gone insane and we go to when he became insane, when he is riding a tractor and sees his family's entire home collapse into a fissure in the ground. We then see that he is in an asylum with people watching over him as he proclaims the rats will get him. We cross cut between them talking about him and him thinking back to him driving around, heading to a city but it being flooded and then running into an elevator overrun with rats. Syd eventually admits he is insane. We find that he is one of many individuals, who after being coddled by the government couldn't take it when some natural disasters happened. They head outside revealing that things actually have been flooded and he is obsessed over rats because he ate some when trapped in an elevator for three days. This story comes off as a less successful attempt at a redo of "Diary of an Absolute Madman" from the same creators a number of issues back in Nightmare.

Fourth is "A Descent into the Maelstrom", an adaption of the Edgar Allen Poe story by Al Hewetson, with Cesar Lopez providing the art. Two men look into the sea at a maelstrom, aka a whirlpool far off. The older of the two tells of how he was caught up in one a while ago. His ship was blast into pieces, with only him and his brother left alive. He eventually realized that in order to survive he had to be as light as possible and tied himself to a barrel. Meanwhile his brother refused to leave the much larger remains of the ship and was sucked into the whirlpool while he survived. As the story ends we realize that despite looking old with his white hair, he is a young man and looks that way due to his experience. A rather unconventional Poe story, that isn't macabre as usual and is more of an adventure tale.

Fifth is "Now... Another Maniac!" by Al Hewetson (story) and Maelo Cintron (art). This is actually the first Skywald story I ever read, from a horror comics story collection I read a few years ago. It is a rare appearance for Cintron outside of the Gargoyles series. Our protagonist gets up at night, planning to kill a man. While pulling out of the driveway he runs over a bike. He finds his victim, takes him at gunpoint and forces him to dig his own grave, striking him in the head with it once its done, then buries him. When he arrives home he is shocked to find the police there. But it is not for his murder, rather he had run over a kid and killed him when he hit the bike at the start of the story. A fairly strong story with some effective art as well, this reads a lot more like a Warren story from this era than a Skywald one.

Next is "Uncle Ed's Grave" by Al Hewetson (story) and Alphonso Font (art). The titular Uncle Ed speaks to his nephew Ralph, admitting that he is a vampire. Ralph does not believe him, but Ed claims that most fantastical things related to vampires aren't real and he is nonetheless one. He speaks of how his own uncle made him a vampire when he was a child and once a year he drinks someone's blood, but otherwise lives a normal life. Ed tries to attack Ralph, but he throws him to the ground and he appears dead of a heart attack. We find that Ralph came here to seize his uncle's jewels, but with him now dead he needs to dispose of the body. He plans to bury him in the local graveyard. He talks of how Ed wasn't ever discussed as part of the family and his apparent insanity was the reason why. Yet when about to mark a gravestone for him, Ralph realizes that Ed was born in 1822 and is 150 years old, which explains why he was never spoke of. Suddenly Ed's arms break out of the ground and grab a hold of Ralph. It is here where the story ends, quite abruptly. I wonder if we'll get a second part as this seems like an odd place to end it.

Seventh is "The Boutique Macabre" by Al Hewetson (story) and Antonio Borrell (art). This is a brief story at only three pages. A man stops by the store Leah's Boutiques and inside meets Leah, a young woman who has many paintings of her killing people. She reveals how each of them are real. She killed the drunk that was rude and tried to assault her, she poisoned the old women who claimed it was immoral for a woman to operate her own business and then she shows him a blank painting. Leah claims he will be the subject of that painting and stabs him.

Last is "Monster, Monster, Watch Them Die" by Augustine Funnell (story) and Ricardo Villamonte (art). The story begins with our werewolf protagonist going on yet another rampage. Then we see Dominik, prince of the gypsies shoot Kirsten and we find that the veiled woman from the previous story has seized the amulet and restored her beauty. She leaves Nola to Dominik, who takes her at gunpoint and we later find has killed her. Our protagonist, discovering this, becomes enraged, turns back into a werewolf and kills Dominik, then cries over Nola's death. The gypsy storyline finally resolved, this would be the perfect place to end this very mediocre series, but alas, the ending states we will get more chapters...