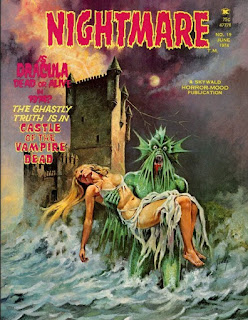 Been a busy month for me, but I'm back with another issue of Nightmare; Sebastia Boada provides the cover which is dated June 1974.

First is the frontispiece "The Hounds of the Baskervilles" by Al Hewetson (story) and Ferran Sostres (art).

Next is the first full length story, "What the Hell is Dracula Doing Alive and Well in 1974?!" by Al Hewetson (story) and Ricardo Villamonte (art, miscredited to Jesus Duran). The story starts quite absurd, Dracula comes across a man in an alley and tells him he can make him a vampire if he pays him $10,000! The story then moves ahead to a while later. Many rich people have come to Dracula's castle in Romania where he refuses their money, but plans to still make them vampires as they desire. He reveals a new plan however, to establish a society under the sea. He brings them there, saying he has already brought many here to what he will call Transylvania II. When they arrive however, they are shocked to find everyone dead! A part fish part man monster has killed them all. In flashback we find that the creature had hoped to become part of the society but was shunned, so she attacked and killed them all. She kills even Dracula, tearing his head off his body and as the story ends we are told the creature will make the remains of Dracula's body her mate. This story is another one of those really ridiculous, over the top Skywald stories and I loved it quite a bit. Pretty much the whole plot is quite absurd and ridiculous, but I feel that is when Hewetson is at his best.

Third is "William Wilson", an adaption of the Edgar Allen Poe story by Al Hewetson, with art by Alphonso Font. The titular William is surprised when he finds another student who looks just like him and has the same name, although he is quite evil and even witnesses him stabbing someone. Years pass and upon turning 21, William inherits a vast fortune and starts participating in debaucheries. During this time he doesn't see the other William or even think of him. Eventually the other William appears though to stop him pursuing a woman, then to reveal him as a cheater at gambling, which gets him kicked out of Oxford. The other William continues to appear as he flees throughout many countries, and William decides to kill him. He successfully slays him with a sword, at which point William himself also dies and we realize the other self was his conscience. I have never read this Poe story, so I'm not sure how accurate an adaption it is. I can say the ending was extremely predictable from the start, perhaps that is why it is not as well known as some other Poe stories. Font continues to provide a fairly good art job.

Fourth is another story in the Shoggoths series, "The Vault" by Al Hewetson (story, credited to Howie Anderson) and Jose Cardona (art). Hewetson himself is again the star of the story, traveling through the area of Kilmarnock in Scotland. He talks to a man on the train who tells him Shoggoths had lived around there. Along with Jose Cardona, Hewetson returns to the Welloch Gravesite that he had visited before and they dig some graves up at night. A night later they find a Shoggoth in the graveyard, having eaten a body. They flee, making their way into a vault held by Hewetson's family where they are confronted by a Shoggoth and crush it with a coffin. They continue down into a city beneath the ground occupied by the Shoggoths. Hewetson and Cardona go to the police, the government, etc... but no one believes them so they blow up the city with dynamite, having found the Shoggoths have already left. Another fairly good story in this series; Cardona provides some good art and Hewetson continues to be really good at aping Lovecraft's literary style.

Fifth is "Tales out of Hell: The Kingdom of the Dead" by Al Hewetson (story) and Jesus Duran (art). The young boy Walter Thurber is caught sleeping in class with fake glasses and we find that he loves to daydream and fantasize. In another lecture the teacher talks about a myth from Crete, where the wind turns into a human form, the God Darbaras Doom. Darbaras seeks to take down the evil queen Melinia, but her guards are able to defeat him and the teacher says that history is less romantic than myth. Walter says however that he actually was there, as Darbaras, and it didn't happen that way. In actuality Darbaras had defeated Melinia, but she told him there was another ruler above her and she could make him her king. This results in him staying with her, but when he realizes it was all a ruse, he kills her by cutting off her head, just as a revolution starts occurring. We head back to the present where Walter goes into some sort of self-induced suspended animation. His doctors believe he is the reincarnated Darbaras Doom. With this the story ends, although it indicates there will be another part. Duran's art is quite good here (I particularly like his job on Melinia), but the story itself is a bit confusing and hard to get at times.

Next is "My Tomb is My Castle", the latest in the Autobiography of a Vampire series by Al Hewetson (story) and Ricardo Villamonte (art). Judas the vampire tells of how once upon a time he had lived in a house, around 100 years ago in Georgia. Judas watches a funeral, as an old man sadly buries his wife and is left by his children. Judas feels sorry for him and helps him when he falls (as it is revealed the old man is blind). The kindly old man lets Judas stay with him for a while and tells him of various stories of his wife. Eventually Judas grows to dislike him and in an argument over a fire, he ends up burning down the old man's home and leaving. It is here where story reveals that Judas was the one who killed the old man's wife by draining her blood. While I've never been much of a fan of Villamonte's art, the writing in this series continues to be pretty good and this is the best story in it yet. I loved the twist.

We conclude with the latest in the Gargoyles series, "The Human Gargoyles vs. the United States of America" by Al Hewetson (story) and Maelo Cintron (art). The gargoyles - Edward, Mina and their son Andrew finish traveling the southern states of the US and return to Manhattan where they have their day in immigration court. Judge Wallace permits them to stay in the US and they head outside, stopping by a public library. Edward senses evil from the lion statue there, and fearing it will attack some nearby civilians fights and destroys it. No one else sees the lion move though and Edward is thrown in jail for destroying it. Judge Wallace briefly visits him but he will have to stay in jail for the time being. This series continues to hold little interest for me, and I am surprised at how overboard the punishment is for destroying the statue. I get a fine, but going to jail over it? Seems pretty ridiculous to me. A mediocre end to what is a fairly good issue.