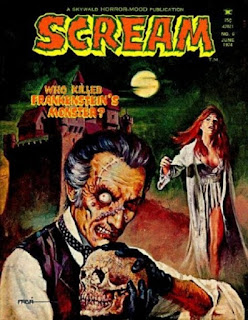 Salvador Faba provides the cover for this issue of Scream, cover dated June 1974.

First is "The Vampire of the Opera" by Al Hewetson (story) and Ricardo Villamonte (art). The story begins at a funeral home as our protagonist, Clayton Stokes, a vampire is cremated while in a coffin. We then learn of Clayton's backstory. Grown up in Harlem, he was a bad kid from a young age, a thief, a murderer and by the age of 21 had built himself up quite a bit in the criminal world until a beating from his enemies causes him to lose his reputation. He flees to Switzerland where he falls in love with and marries a beautiful young noble woman, Countess Lugos, after murdering her grandfather. Her uncle comes to stay with them and he soon discovers both are vampires and they turn him into one too. Clayton kills the uncle then his wife and returns to Manhattan where he slays criminals and sleeps in an opera house. He is able to escape from authorities by turning into a bat, but upon returning is confronted by his own father, who is brandishing a cross and ashamed of his son's actions. Clayton eventually kills him before a crowd and is beaten by them, then put in the coffin where he is cremated. A lengthy, but fairly good story to kick off the issue. Villamonte's art is quite inconsistent though, ranging from quite good at times to quite poor at others.

Next is "Ms. Found in a Bottle", an adaption of the Edgar Allen Poe story, with Al Hewetson doing the adaption and Alphonso Font doing the art. A man comes across a bottle, inside is a manuscript/journal entry written some 20 years prior. It speaks of a man who was on a ship in the ocean, but when it was struck by a great storm everyone else on board died. The man eventually sees another, far larger ship approaching, which destroys his ship. He is able to go on board though, finding it fill of ancient looking men who do not even acknowledge him. The man stays on the ship and writes his journal, believing that he is on a ship of the dead as it seems invulnerable even as icebergs smash through it. As the story ends we see the ship sinking into a whirlpool by the south pole. This story is similar in nature to "Descent into the Maelstrom", another Poe tale, although more macabre in tone.

Third is "Frakenstein 2073: Death of the Monster" by Al Hewetson (story) and Cesar Lopez (art). Frankenstein's monster awakens and finds he is now in the year 2073, an age where nearly all men have died out due to a disease that has come in from space. The few men still alive are in captivity by women, forced to father more children so the species will continue. A woman finds the monster and brings him to her queen. Along the way we have a 2 page recap of the monster's creation (making sense given how sporadically this series appears). The monster reaches the queen, but refuses to be her king or father any children. He lies down and dies, and this series comes to a close. The monster finds himself in a quite an enviable position, yet decides its not for him and dies (although with no explanation how). This is described as the final part to the series although it says if demand is there, it may be brought back. This was a fairly decent series, but that was mostly back in Skywald's early days when Tom Sutton was creating it.

Fourth is the latest story in the Nosferatu series, "... and the Gutters Ran with Blood" by Al Hewetson (story) and Zesar Lopez (art). Nosferatu calls for Jacques Dupoin, who wears a rat mask to tell his story next. Jacques was once a detective in Paris, but he fell for a beautiful woman who used information he gave her to blackmail a politician. Jacques is found out, fired and the woman leaves him as well. He is cast from society and reduced to working in the sewers. There he decides that he will become a great criminal. He plots to steal a painting from the Louvre, but once inside he is found out. He flees to the sewers. He is shocked to find out that it was the woman who ratted him out and he is shot, falling back into the sewers where the rats consume his body. Back in the present he takes off his mask and hood, revealing his mostly eaten body. This series continues to be one of the biggest highlights of Scream, providing strong art from Zesar and some interesting and moody anthology tales.

We conclude with the first story in "The Saga of the Victims" series, titled "What is Horror? No, Who is Horror?" by Al Hewetson (story) and Jesus Suso Rego (art). Josey Forster and Anne Adams are students at Scollard Manse in Manhattan. One night upon returning to their dorms from a date they are grabbed by strange looking mutant humanoid creatures who bring them down with them through some tunnels. They eventually bring them to some stocks, where they are bound up and a hooded woman comes out telling them they are on trial for trespassing and will be tortured until dead. They are then brought by the mutants into a padded cell. Anne is able to strangle one of the mutants who comes in the cell and they flee. While watching the hooded figure they realize it is their headmistress, Jaspers. They follow her up some stairs, get into a confrontation and upon fighting over a torch, Jaspers is killed. Upon making it up to the streets of Manhattan they realize that they are the only 2 normal people and everyone now looks like one of the mutants. Suddenly they are grabbed via plastic bags that fall on them from above and are pulled up on top of a building by a normal looking man who says he is a doctor. The man speaks in riddles, saying that Horror is who is behind all of this. He leaves them in a room and soon comes in a man with no skin! This is one of Skywald's more well known series, in particular for Suso's strong art and the rather nonsensical plot, made to be as unpredictable as possible. And this opening story certainly delivers. Suso provides some of the best art we've seen in a Skywald story yet and it is an off the wall story, especially with its ending. I look forward to the several more stories we will be getting in this series.