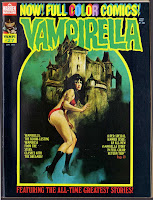 Enrich provides the cover for this issue of Vampirella. Enrich later painted Vampirella in a very similar pose for the cover of issue 42. This is mostly a reprint issue, but does feature an all new color story featuring Vampirella.

First is "Wolf Hunt" with art by Esteban Maroto and story by Joe Wehrle. This story is originally from Vampirella #16. An old man finds a woman who transforms into a wolf in the moonlight and captures her in his castle. She is eventually able to escape and take revenge. As always, Maroto's art is quite good here, the best of the issue.

Next is "Welcome to the Witches Coven", from Vampirella #15. Art is by Luis Garcia story is by Don McGregor. Some extremely good art kicked off Garcia's short lived Warren career in this story's original appearance, appearing to have been done in pencil only here. The story ain't that great though, featuring a woman in the modern era joining a witch's cult with disastrous results as they sacrifice a business friend of her husband's, then kill her when she tries to escape and alert the authorities.
Third is "Quavering Shadows" by Jose Bea (art) and Doug Moench (story). This story is also originally from Vampirella #15. While a serial killer plauges a town, a man, Andrew, visits his friend Jason, who has purchased a castle deep in the woods. Andrew eventually makes it there and finds his friend barely sane, telling him of ghosts in the castle and showing him mysterious shadows on the wall. Things get even stranger as Jason appears in different parts of the castle at the same time, then attacking Andrew with a club. Andrew returns home where he finds that his wife had been attacked by the serial killer, who was Jason! A very odd story.

Next is "The Frog Prince" by Bill Dubay (story & art). This story is from Vampirella #13. A woman meets a talking frog who tells her he's a prince. She kisses him and he turns into a human and agrees to marry her. However it is soon revealed that as a human he can't speak, only croak!
Next is this issue's only original story, "Return Trip", featuring art by Jose Gonzalez and story by Jose Toutain (the head of Selecciones Illustrada, providing a rare story). This is the first ever color comic of Vampirella. The coloring is a lot better than that which had been used in issues 25 and 26 of Vampirella but is still hardly close to the greatness that Warren eventually attained. This story continues that which had been taking place in the last several issues of Vampirella. Rose, Pendragon's former wife seeks revenge on him so she recruits help from a man named the Dreamer who can manipulate people's dreams. He tries to trick Vampirella into killing Pendragon by sucking his blood but she won't do it. He tries to stab her instead, but Patrick, Pendragon's grandson, shoots him, saving Vampi.

Sixth is "Cilia" by Felix Mas (art) and Nicola Cuti (story). This story is from Vampirella #16. A pair of men are in a shipwreck, but a beautiful mermaid rescues them. She marries one of the men and is able to turn into a human form, but must remain near the water. A mob finds her however and captures her. The men eventually find her, but being away from the water so long, she has become an old woman. Her lover kills her then carries her off into the sea.
Next is "Quest" by Jeff Jones (story & art), from Vampirella #12. This story features a mere 2 panels per page, with some nice artwork by Jones. The story features a hunter pursuing a woman, who is attacked by another man, then flees using some elephants. She is attacked by a saber tooth tiger, but the hunter arrives, seemingly to save her, but in reality to kill her. Reminds me of "Yellow Heat", my favorite Warren story.

Last is "War of the Wizards" which is from Vampirella #10. The story is both written and drawn by Wally Wood. It's about a pair of rival wizards who use a soldier in their fight between each other. The soldier is able to defeat both wizards, and is revealed to be a wizard himself. As usual, Wood's art is quite good, and the story, while not having a horror theme, is pretty good too.
Posted by Quiddity at 7:30 PM