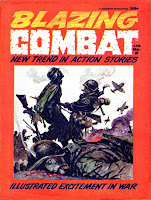 With my first issue summary/review in about 2 years, I'll be covering the second issue of Blazing Combat. This issue's cover, by Frank Frazetta, is among the goriest published by Warren, featuring a soldier impaling another soldier with his bayonet while a corpse with a smoking bullet hole in his head lies in front of them. As typical for Blazing Combat, all stories in this issue are written by Archie Goodwin.

First up is "Landscape", drawn by Joe Orlando. This story is the most controversial story in the history of Warren Publishing and is typically brought up as the main reason why Blazing Combat ended up being cancelled. It takes place in Vietnam and features an old farmer dedicated to his rice fields. The Viet-Cong take charge of the village and his son joins them, but is killed during a battle with the American/South Vietnam forces that fight with the Viet-Cong near his farm, Another battle soon takes place and his wife is killed. More fighting takes place and spreads into his rice fields. As the Viet-Cong run into it, the Americans/South Vietnamese start setting the field ablaze. The farmer tries to stop them from from destroying his fields and is shot, killing him. Believing the story to show American troops killing innocent civilians, rumor has it that the American Legion and military pushed hard to prevent the magazine from reaching retailer's shelves and poor sales forced the cancellation of the magazine a few issues later. This is a very strong story and was enjoyable to read after hearing about it for years. While I would put "Survival" from the following issue ahead of it as the best story from Blazing Combat, this is as close to as good a story as you can get from this magazine.
Next is "Saratoga", with art by Reed Crandall. This story takes place during the revolutionary war, showing a battle between the Americans and the British. A heroic general leads the troops in battle and is revealed to be Benedict Arnold at the end of the story. A so-so story with an interesting twist at the end; overall my least favorite of the issue from a story standpoint (the art is very strong).
Third story is "Mig Alley", with art by Al McWilliams. This story takes place in 1953, during the Korean War. A fighter pilot's wingman, "Pappy" has a very successful career over nearly 100 missions. On their latest mission however Pappy's plane is damaged and he has to eject. This shakes him up enough that he screws up landing on his next mission and crashes his plane in the runway, killing him.
Fourth is "Face to Face", another story with art by Joe Orlando. This story takes place during the Spanish American war in the late 1800's. An American soldier is shot in the shoulder during the battle and then sent to deliver a message to the nearby colonel. He is pleased about the bragging rights he will have for his duty and war wounds. Along the way he captures a Spanish soldier, but is attacked by the soldier and the two fight hand to hand, ending with the American soldier bashing the Spanish soldier's head in with a rock. Following the ordeal, he no longer thinks the fighting to be enjoyable and worthy of glory.
Fifth is "Kasserine Pass", with art by Al Williamson and Angelo Torres. This story takes place in the African Desert during World War II. American soldiers within a Sherman tank are confident of their superiority to the Germans due to their advanced weaponry, but are surrounded by German panzers and are all killed.

Next is "Lone Hawk", with art by Alex Toth. This story acts as a historical account of the World War I Canadian fighter pilot William Bishop. The story discusses his first flight, then shows some of his various successful missions. In addition to his kills, the story points out the rarity of him making it out of the war alive unlike many other well known pilots during this era.

Next is the one page "Combat Quiz", with art by Angelo Torres.

The issue concludes with "Holding Action" by John Severin. This story takes place during the Korean War. A young soldier names Stewart is brought to the front lines and is extremely nervous about firing at the enemy soldiers. He does it after heavy pushing by his commanding officer. Stewart becomes obsessed with firing at the enemy, firing even after the battle is over, and later at Korean medics tagging the dead. When the battle ends he has to be dragged away kicking and screaming about how he needs to remain at his position.
Posted by Quiddity at 4:49 PM

This is a compilation of amazing stories. This is very interesting. Thank you for sharing. I hope you will keep posting for more articles like this. Good job!

Great blog! I like all the information that’s being shared, congratulations. More power! Marie Greenhalgh