As part of a new feature on this recently revived blog, I will be writing articles on some of my various favorite Warren artists. While my principal discussion of such articles will typically be their work for Warren, I shall also where I can discuss their pre- and post-Warren work as well. I figured no person better to start with than my personal favorite Warren artist, Luis Garcia Mozos.

Much of Garcia's pre- and post- Warren history within this blog entry could not have been written without the writings of David A. Roach, from whom I've been able to learn a lot about Garcia from his book The Warren Companion as well as a wonderful multi-part article I've found on the web at the following site: http://theartofluisgarciamozos.blogspot.com/. For those interested in more about the artist I strongly recommend checking out both.

While Luis Garcia Mozos (credited in the Warren magazines as just Luis Garcia) had a relatively small profile compared to many other Warren artists, his work is unquestionably that which I enjoy the most and I consider him my personal favorite Warren artist, if not one of my favorite comic book artists ever. Garcia was one of many Spanish artists who worked for Warren in the early 1970s due to the company's affiliation with Selecciones Illustrada. Garcia worked for Warren only for a year, 1972, producing 9 stories and 3 frontispieces. Then, just like that, he was gone, never to work for them again, although 5 additional stories of his were reprinted in 1975.


Garcia was born in Puertollano, Spain in 1946 and was interested in drawing from an early age. At the mere age of 14, Garcia joined the publishing house Bruguera. Like many of the S.I. artists who appeared in Warren magazines during the 1970s and 1980s, he did a lot of romance comics that were published in Britain, including Love Story, Romeo and Mirabelle. By the age of 17, Garcia had left Bruguera and joined S.I., where he remained until after his work for Warren. While at S.I., Garcia befriended many artists that also ended up working for Warren at some point, including Esteban Maroto, Jose Gonzales, Adolfo Usero (Abellan), Ramon Torrents and Carlos Giminez. Garcia's early influences appeared to be Gonzales and Jordi Longaron, an artist that never did any work for Warren. By the late 1960's Garcia's work started showing the style that he would do for Warren, albeit it without the fine, realistic detail that made him so distinctive.


In addition to his art, Garcia acted as a model for romance novels published throughout Europe along with Carol de Haro, his girlfriend. de Haro is notable as being the model for characters in the Garcia-drawn stories "The Men Who Called Him Monster", "Song of a Sad-Eyed Sorceress" and "Love Strip", but more significantly, Vampirella in paintings done by Jose Gonzalez and Enrich Torres. In 1967 he temporarily was part of a commune with some of the various artists mentioned earlier and they worked on the comic "5 x Infinity". He then returned to his work on British romance strips.

In 1971 Jose Toutain, head of S.I., was able to arrange for his artists to appear in Warren magazines and Garcia was one of many S.I. artists who soon started appearing in the pages of Creepy, Eerie and Vampirella. Garcia's first work for Warren was "The Men Who Called Him Monster", published in Creepy #43, a so-so story from a script standpoint (written by Don McGregor), but displaying beautiful Garcia artwork. The influences on Garcia for this strip were quite apparant, the main character was based on actor Sidney Poitier while the werewolf villain was based on the Lon Chaney Jr. portrayal of the werewolf in 1941's The Wolf Man. Carol de Haro appeared as a witness that appeared on a couple of pages. A kiss between her and the Sidney Poitier character became the first inter-racial kiss in main stream comics. Incidently enough, the kiss made no sense storywise, and was all due to a misunderstanding of a descriptive line "this is the clincher" which was misunderstood either by Garcia, or the S.I. translator for the story. Right around this time Garcia also drew the story "Welcome to the Witches Coven", which was also written by McGregor, and published in Vampirella #15, the same month as Creepy #43. While there were no firsts with this story, it was appreciated enough to win Garcia the Warren award for best art in a story for 1972. The 1972 Warren awards were, oddly enough, not given the special feature that the annual Warren awards usually received, but this was referenced in a later year article on past winners.


Garcia's work continued throughout 1972. Some stories like "Song of a Sad-Eyed Sorceress" (Vampirella #18) and "Love is No Game" (Vampirella #20) brought back memories of his romance comics past. Others like "Spellbound" (Creepy #46) and "The Caterpillars" (Eerie #41) permitted him to do some more bizarre subject matter. Garcia's final Warren story, "Paranoia" (Vampirella #21) was somewhat of a dissappointment, with a rather nonscensical story and short running length.

In 1973 Garcia started work for the French magazine Pilote and teamed up with writer Victor Mora. They stared a series called "Les Chronicles Des Sin Nombres" which told a variety of stories from different time periods. The first five stories from this series were reprinted in Vampirella in 1975, although they were rewritten by Bill Dubay, Budd Lewis or Gerry Boudreau and the credits were often screwed up in some fashion (with Luis being called Jose multiple times and Mora frequently being left out entirely from the credits). "The Last Legacy of Gaslight Lil" in particular has a succubus storyline overlayed over the western outlaw story that the drawings show that I would not be surprised one bit if it had nothing to do with the original story. All five of these stories are amazing to look at, and with maybe the exception of some stories done by Val Lakey in the late 1970s/early 1980s are the most realistic artwork to appear in a Warren magazine. One of the stories, "Janis" (printed in Vampirella 45) was colored by Warren and features in my opinion the most beautiful artwork to ever appear in a Warren magazine. Its the only color comics artwork of Garcia's that I have been able to see, and may be all that is out there by him in color from a comic standpoint.


Warren clearly had a lot of respect for these stories, maybe a little too much as some obvious swipes would appear soon after. In particular, Paul Neary's "Exterminator One" story from Eerie 63 blatantly copies several panels featuring the main character of "Love Strip" (printed in Vampirella 44), while "The Winter of Their Discontent" from Vampirella 45, written by Gerry Boudreau, is for arguably a ripoff of "The Wolves at War's End" (printed in Vampirella 43). All five of these stories were excellent from all aspects; "The Wolves at War's End" was declared the second best story in the history of Warren in the Warren Companion book, and "Love Strip" appeared further below in tenth place. The Wolves at War's End would later be reprinted in Heavy Metal as well, although I've never been able to acquire myself a copy. 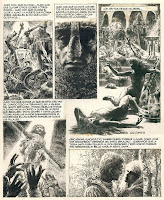 Following "The Last Legacy of Gaslight Lil" in Vampirella 47, Garcia was to never appear in a Warren magazine again. His next work following Pilote was "Chicharras", which appeared in the French magazine Scop, and portrayed his return to his childhood village. Following Chicharras Garcia did a variety of politically influenced stories which appeared in various magazines. He also founded the magazine Trocha around this time.


Aside from his Warren work, Garcia's most well known work that appeared in America was probably "Nova 2" which he began around 1980. The story began in the Sahara desert by changed focus to feature a comic book artist who buys a gun and tries to kill himself. Aspects of the story are similar to "Love Strip", which incidently is the name of a comic that the main character works on during the story. Nova 2 was eventually printed in America in Heavy Metal. To this point I've only been able to track down one of the multiple issues that features it, but hope to find them all at some point. 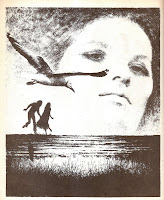 After Nova 2 Garcia founded the magazine Rambla with friend and fellow former Warren artist Jose Bea. Rambla went bankrupt in the mid 1980's due to economic problems in Spain at the time. Following this, Garcia moved more into commercial art and fine art.

Garcia's Warren work was the following:

The Men Who Called Him Monster (Creepy 43)

The Law and Disorder (Creepy 47)

Welcome to the Witches' Coven! (Vampirella 15)

Death in the Shadows (Vampirella 17)

Song of a Sad-Eyed Sorceress (Vampirella 18)

Love is No Game (Vampirella 20)


The 5 stories Garcia did for Pilote that were reprinted in Warren magazines were:

Around the Corner… …Just Beyond Eternity! (Vampirella 42)

The Wolves At War's End (Vampirella 43)

>>Warren clearly had a lot of respect for these stories, maybe a little too much as some obvious swipes would appear soon after.

And even in the stories themselves. For example, in the image posted here --

-- the two nude women shown in the third panel have been swiped from Edward John Poynter's "Cave of the Storm Nymphs" (1903):

Good catch! :P There's many swipes within the Warren mags, but wasn't aware of that one. Something I'll probably do an article on some day.

Luis Garcia's art was based on photographs, and he would use whatever was available, from photographs of his friends, to iconic images, photos, paints, etc. I wouldn't call it swiping if it is done intentionally.

Esteban Maroto would instead use iconic images from other classic comic book artists, like Frazetta, Jones and Foster, among others. And the rest of the Spanish artists also used photographs from magazines as reference to draw their women. As a a matter of fact, I don't know any comic book artist who doesn't use photographs, this side of doing only humorous strips or being Basil Wolverton...