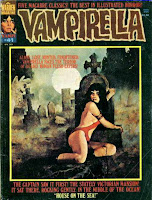 Enrich provides the cover for this issue of Vampirella, dated April 1975. One of Enrich's best and most praised covers. Jose Gonzalez provides a one page intro from Jose Gonzalez.

First is "The Malignant Morticians!" by Leopold Sanchez (art) and Mike Butterworth (story, as Flaxman Loew). Vampirella adopts a new puppy. Feeding him dogfood she and Pendragon find a ring in it that belonged to his deceased Uncle. They investigate, finding a conspiracy surrounding morticians who have been turning dead people into dog food.

Second is Dracula in "Rainy Night in Georgia" by Esteban Maroto (art) and Gerry Boudreau (story). This story is the finale in the Dracula series, although it has an open ended ending. This is the only story in the series to not appear in color. It features a woman who becomes pregant from a black man in the early 1900s in Georgia. Her lover is killed and she is forced to go on the run, pursued by her father and a racist sheriff. She comes across the Carnival that Dracula is in and is helped by Dracula and the birdman when her pursuers arrive.

Third is the 20 page "The House on the Sea" by Auraleon (art) and Jim Stenstrum (story). A ship about to be taken over by a mutiny from pirates who are hired hands on the ship suddenly crashes into a large house in the middle of the sea. The captain and some of his colleagues suddenly find themselves inside the house and find other people inside, with no explanation whatsoever of whats going on there. Eventually they find out that they are dead and that various dead people are appearing and reappearing in the house. An odd, but very good story.

Fourth is "The Wickford Witches" by Jose Ortiz (art) and Gerry Boudreau (story). This story takes place in a village where many people have been burned for being accused witches. A woman's father ends up dying after his daughter wishes it so because of the arranged marriage she is in. She breaks off the marriage with her fiance so he accuses her and her actual lover of being witches. Suddenly the ghost of her father appears, revealing that the fiance was responsible for his death due to the inheritance he would receive over it and kills the man.

Last is "Goodbye, My Love, Goodbye" by Fernando Fernandez (story & art). Fernandez would win the Warren Award for best artist/writer for 1975 for this story. It features a man in the future (well, not anymore, it took place in 1992!) where people are able to have artificial lovers. A man starts being dissatisfied with his artificial lover and ends her existence, destroying her so she can not be revived. He soon longs for another lover and finds Sonja, an artificial woman who is the embodiment of his fantasies. Eventually he feels the same way about her however, particularly upon finding she has a secret. He goes through with terminating her existence as well, only to find out afterwords that her secret was that she had a human soul.
Posted by Quiddity at 9:51 PM