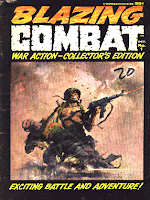 After a very long wait Fantagraphics has finally released its Blazing Combat reprint book giving me the opportunity to finally read (and review) the remaining 3 issues of Blazing Combat that I don't own original copies of yet. Frank Frazetta provides the cover for this issue, something he'd do for each issue of this magazine. A good issue, but not at the level of issue 3 of this magazine, which I reviewed a while back.

First is "Viet Cong" by Joe Orlando (art) and Archie Goodwin (story). This story, like the first story of each issue of this magazine was about the Vietnam War. This story focuses on the experiences of a lieutenant while in the war.

Next is "Aftermath!" by Angelo Torres (art) and Archie Goodwin (story). Taking place during the civil war, a southern soldier and northern soldier befriend each other while burying one of their fallen comrades. The two soon get in a fight however over who started the war and end up killing each other.

Third is "Flying Tigers!" by George Evans (art) and Archie Goodwin (story). This story features a group of pilots working for the Central Aircraft Manufacturing Company and their adventures in the sky. One them are upset at the loss of life during their latest mission simply to protect a plane, although it ends up having their leader on it.

Fourth is "Cong View!" by Gray Morrow (art) and Archie Goodwin (story).A soldier is ordered to lead his troops through a mortar filled region during World War II to clear the way for another group of soldiers. He is hesitant to do so with his fatigued soldiers, but is forced to do so anyway. All his men end up dying during the mission. While more soldiers arrive and go through with their mission he just sits there and cries.

Fifth is "Cantigny!" by Reed Crandall (art) and Archie Goodwin (story). This story features a young soldier in World War I who is excited about facing German soldiers in battle but the regiment never comes across one. While heading through an abandoned city he finally comes across one as goes in an abandoned house to write a letter and ends up being killed by him.

Next is the one page Combat Quiz with art by Angelo Torres.

The sixth story is "Mad Anthony!" by Russ Jones, Tex Blaisdell and Maurice Whitman (art) and Archie Goodwin (story). In a battle in 1771 an american soldier has one of his eyes stabbed by a british soldier's bayonet. Two years later he takes part in a battle at Stony Point where his side wins. He ends up encountering the very soldier who stabbed him two years earlier and gets his revenge on him by stabbing one of his eyes.

Last is "Enemy!" by John Severin (art) and Archie Goodwin (story). An angry sargeant during World War II kills a German soldier they capture, mistakenly thinking he killed a colleague when he mistakes the soldier's initials on a lighter for the initials of the colleague.
Posted by Quiddity at 10:56 AM