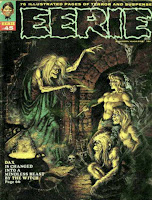 Luis Dominguez provides the Dax-themed cover for this issue of Eerie, dated February 1973. The frontis for this issue is "Eerie's Monster Gallery: Vlad the Impaler" by Auraleon (art) and Fred Ott (story).

First is "The Mound" by Tom Sutton (story & art). In this story a comet crashes into Earth, causing a mysterious mound to appear. At this time humanity is battling an onslaught of bugs that are threatening to destroy mankind. Fearing the mound contains the bugs' savior, mankind has it blown up. But it instead contained mankind's savior, a giant anteater, and by killing it mankind seals its own fate.

Second is "Ri, Master of Men" by Martin Salvador (art) and Hal Turner (story). In the future mankind creates a massive computer, Ri, which is made ruler of the world. Ri also starts taking over people's minds, turning them into zombies. A group of people head off into space to escape Ri, eventually landing on the moon. There they find an advanced group of people... and Ri, who is still in control.

Third is "When Wakes the Dreamer" by Jesus Suso Rego (art) and Don McGregor (story). Yet another nonscensical McGregor story, featuring a man dreaming about a world where cities and people are vanishing and a weird werewolf like monster appears. The dreamer wakes up, finding that the same thing is happening in the real world.

Fourth is "A Blade For the Teacher" by Luis Dominguez (art) and Bill Warren (story). A powerful warrior seeks to fight his old master in battle to prove himself even more than his current elevated status. He recalls the statues of powerful warriors his master taught from when he was a student. He eventually finds the master, who permits him to join the statues by turning him into one.

Fifth is "Maneater" by Rubio (art) and Steve Skeates (story). An artist murders a woman who is trying to blackmail him. When he leaves he finds himself driving in a landscape like one of his paintings. There he sees the woman he killed, who bites his head off. In reality he gets into a car crash and is killed, although the police find his head missing when they come to the crash site.

Last is Dax the Warrior in "The Witch". A witch captures Dax and his men, seeking to steal their hearts and restore her lost youth. She also turns Dax into a ape like creature. Dax in his ape form kills a snake and puts its fangs into the heart of a nearby warrior. When the witch takes the hearts she becomes young again and restores Dax to his normal self. The poison injected into the hearts by the fangs kill her seconds later however.
Posted by Quiddity at 5:25 PM

I just discovered and really enjoy your blog. I had a question as to how DC's horror comics compare to Warren's? The two companies seem to share some writers and artists.

I love to read your blog. it is very interesting to me, and I'm sure other readers.
I work in foreign currency investments (forex) my manager forced me to read a lot
forex books but it's very boring so I'm running here to read your blog .. :)

Kudos to you! This is a really good blog here and I love your style of writing. How did you get so good at blogging? MAson from web hosting

This is very different from the Social media

All deals are off