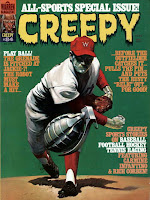 An all sports issue! Like the Christmas specials, was never a big fan of these, even though I am a sports fan. The cover is by Ken Kelly.

First up is "Hitter's Wind!" by Carmine Infantino & Walt Simonson (art) and Roger McKenzie (story). The story takes place in the negro leagues just before the great depression, and is about a ball player who sacrifices his life to win the pennant, dying just after he hits the game winning hit.

The issue's best story is next, "The Mummy's Victory" by Richard Corben (art) and Roger McKenzie (story). A mummy in museum comes back to life and takes the place of an injured player in a football game, winning the game for them! Funny art by Corben on the mummy. A sequel would be done in the next all sports issue, Creepy 93.

Third is "Till Hell Freezes Over!" by Carmine Infantino & Dick Giordano (art) and Steve Englehart (story). When a hockey player dies during a game due to a hit by an opponent, an angry woman fires a gun into the scoreboard that ends up shorting out the electricity for the whole building. With everyone trapped in the building and the temperature getting lower and lower, everyone eventually freezes to death.

Fourth is "Home Stretch" by Leopold Sanchez (art) and Roger McKenzie (art), about a horse and the hunchback taking care of it who are burned to death when the owner hires a jockey to burn the stable down for the insurance money on the horse. Both the horse and hunchback die, but come back from the dead to take revenge.

Fifth is "Menace, Anyone?" by Carmine Infantino & Al Milgrom (art) and David Micheline (story). A black tennis player is very successful in a tournament, so the racist governor kills him. The player's friend brings him back to life so he can win the tournanment, and also sacrifices his life for him so he can remain alive.
Last is "Relic" by Carmine Infanino & John Severin (art) and Roger McKenzie (story), which features baseball in the future, where robots are all the players. The story focuses on an old human manager, the last one in the game, and his friendship with the first robot to ever play the game, Jackie-7, who is now quite out of date. Despite Jackie-7's destruction, they are able to win their final game together.

Stories for the most part aren't badly written, but having 4 of 6 stories written by the same writer and 4 of 6 stories pencilled by the same artist certainly result in a lot of repetiveness here, at least in my opinion.
Posted by Quiddity at 4:46 PM

I read this as a kid. The mummy story has been stuck in my head for the last couple of decades at least. Thanks for the review!