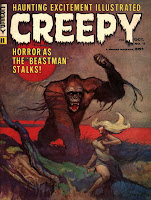 A nice cover for this issue by Frank Frazetta, featuring a giant beast man pursuing a beautiful woman. The frontis for this issue is "Creepy's Loathsome Lore" by John Severin (art) and Archie Goodwin (story).

Up first is "Hop Frog" by Reed Crandall (art) and Archie Goodwin (story), an Edgar Allen Poe adaption. It features the title character, who is a midget that is constantly teased and absued by the king and his men. One night Hop Frog convinces the king and two friends to dress up as gorillas to scare some guests. Hop Frog takes this opportunity to bind them then set them all aflame, and leaves the castle for good.

"Sore Spot" by Joe Orlando (art) and Archie Goodwin (story) features an executioner who sets up an innocent man to die for a murder he committed. After the murder a red spot appears on his chest which grows bigger and bigger, and eventually ends up being the executed man's face!

Next is "The Doorway" by Dan Adkins (art) and Archie Goodwin (story). A security guard comes across a destroyed lab with an odd doorway. He goes through and finds himself in another world, where a large bat like creature with a skull face takes over a man's body. Another creature arrives and takes over our protagonist, who destroys the doorway and kills himself in order to stop it from taking over Earth. Only the creature takes over a nearby person upon his death, enabling him to restore the doorway.

"The Black Death" by Manny Stallman (art) and Ron Parker (story) feature a pair of men who dispose of corpses whose demise was due to the black death. They sell the jewelry of the dead to various people, causing more deaths, which in turn enables them to get even more jewelry to sell. Eventually one of their larger benefactors dies due to them and they go to his house to take all his treasure. They get trapped in the basement when they find it... and unfortunately that's as far as I can go, as my copy of this issue is missing the last page.

"Beast Man" by Steve Ditko (art) and Archie Goodwin (story) is next, featuring a boxer who has a bad heart, so he gets it replaced with a gorilla's heart! Only he finds himself becoming a monster! Or does he? It ends up everything is in his mind, but that doesn't stop him from going on a rampage anyway.

"The Devil To Pay" is next, with art by Donald Norman and story by Archie Goodwin. A duke summons a demon, seeking more power for himself. The demon refuses, instead telling him that he'll die within a year and his soul will belong to hell. He can prevent that if he finds someone wiling to give up their soul, but if he fails, he'll die within a day. The duke finds a man and hypnotizes him into doing his deed, only for the man to end up being Satan himself!

Last is "Skeleton Crew" by Angelo Torres (art) and Archie Goodwin (story). A pair of men come across an abandoned ship where they find only skeletons. The ship's log talks about a coffin they took aboard in order to avoid it being mutilated by natives. Only a mysterious plague engulfs the ship, killiing anyone who come in contact with the coffin, leaving only skeletons behind. Eventually everyone has died from it. In the real time the truth is soon revealed, that warrior ants put in the coffin killed the crew, and attack the two men that found it as well!
Posted by Quiddity at 4:55 PM

I remember the ending of that story about the plague well. They go down into a vault to pick up tons of swag after the death of their benefactor, finding so much that they are giddy and can't believe their good luck. In classic Creepy poetic justice fashion, the vault door creaks closed on them. They start prying at the door of the vault with a crowbar and beating it with a mallet. Supernaturally, the volume of the jewels and treasures starts to grow, and eventually engulfs and suffocates them. The last scene we see, their mouths are practically covered by baubles and gold.