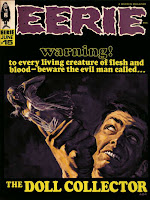 Last is "A Change in the Moon!" by Jeff Jones (art) and Clark Dimond (story). This story takes place in the late 1800's. A man tries to drown his wife by knocking her off a boat, only for her to be saved by a bizarre bald man. The two return to land, where it is explained that the wife was attacked by a wolf. The husband visits an occultist to see if something can be done for a werewolf, and all she can provide him with is silver bullets. He tries to kill his wife again by pushing her into a train but the bald man appears again to save her. The two confrotnt the husband on the roof and the bald man is revealed to be a werewolf himself. The husband kills him, but finds he can't shoot his wife, now in wolf form, so he lets her attack him such that they'll both be wolves on the next full moon.
Posted by Quiddity at 7:03 PM

Love your blog, very readable! I've been poring over your archives searching for a Warren pub I read as a wee lad (late 70s or early 80s). Can't remember much of the story other than a group of futuristic soldiers/police descend into sewers and are swarmed by cannibal-mutants in the end. Probably the setting was post-apocolyptic but I was really to young to read my uncle's horror mags so I can't remember much. Ring a bell? Thanks so much

Hmm. Can't think of that one off the top of my head, but if it comes to mind, I'll let you know. "The Maze" from Creepy 63 features cannibals in the sewers but I don't recall any soldiers/police being involved.

After checking your writeup for Creepy 63 that definitely wasn't it. Oh well, one of life's little mysteries. Still, it was neat that Creepy 63 featured "Jenifer" as that was adapted for the Showtime series "Masters of Horror" and one of my favorite episodes to boot! In fact I watched it again last week! I may have to hunt that issue down as I love all things Bernie Wrightson as well. Thanks again!

I was so young (5-6yrs old) when these came out, I didn't realize about the collapse of Warren, or at least, the hard times, but I did start buying those schlocky Eerie Publishing mags, like Tales of Voodoo, Weird, etc., which permantly warped my delicate mind forever. Lots of guts, decapitations et al. Good work, thanks!