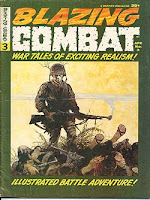 My first issue of Blazing Combat covered on this blog, and it will be my last for a while as this is the only issue that I own at this time. The cover is by Frank Frazetta, who did all the covers for this magazine.
First is "Special Forces" with art by Joe Orlando & Jerry Grandenetti (uncredited) and story by Archie Goodwin. The story, occuring in Vietnam surrounds a group of soldiers in their battle with the Viet Cong.

Second is "Foragers" by Reed Crandall (art) and Archie Goodwin (story). The story features soldiers from the North, 'Foragers' heading through towns in the South during the civil war era. They ravage the towns they head through until they come across a cabin manned by a single old man with a rifle, who kills most of the soldiers. He finally runs out of bullers and the lead forager is about to kill him but is killed by his own man, who wants the killing to stop.

Third is "U-Boat" by Eugene Colan (art) and Goodwin (story). During World War 2 in the Atlantic a US boat is sunk by a German submarine. Two survivors are brought on board, one who is bloodthirsty and desires to be on the offensive for once. When his collegue plans to give away their position, he sells him out, but is killed by the Germans anyway when the allied forces spot the submarine and attack.

Fourth is "Survival" by Alex Toth (art) and Toth & Goodwin (story). An old man in a post-war landscape ravages for food found from small cans, and has to fight of wild dogs. He gets excited upon realizing that there is other people nearby when he finds a raft, but upon finding out that they have taken some of his food he goes on a rampage and kills them all. He is shocked to find a woman among the people he killed. My favorite story of what is already a superb issue. I love the final lines of the story "Suddenly, the air filled with a taut, shrill, horrible cry of pain and rage... Animal-like in pitch and quality, it rose higher into the night, ripping, tearing my head apart! I tried to shut it out... out... but it wouldn't! ...and couldn't stop it... for in a while, I realized the truth... and knew that the raw, shrill scream... was MINE!"

Fifth is "The Battle of Britain!" featuring art by Wally Wood & Dan Adkins (uncredited) and story by Wood. My least favorite story of the issue, it takes place in 1940 featuring allied planes facing off against Nazi planes. The hero of the story fails miserably his first time in the air and narrowly survives the second, but they call off the fighting in order to bomb the German cities instead, sparing him future combat.

Sixth is "Water Hole!" by Gray Morrow (art) and Goodwin (story). The story takes place in the late 1800's where US troops pusue Apache warriors. The story surrounds a single soldier who finds himself the last living soldier on the battlefield. He is willing to die and finds an Apache warrior, who surrenders to him, driving him crazy.

Last is "Souvenirs!" by John Severin (art) and Goodwin (story). The story occurs in Japan during World War 2. A soldier becomes obsessed with taking the gold fillings out of the teeth of dead japanese soldiers. His superiors tell him to leave a field of dead soldiers alone, but he returns that night to take the gold, only to find out that the soldiers were all playing dead. He is killed, but manages to break up the planned Japanese ambush because of it.
Posted by Quiddity at 7:24 PM