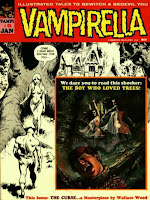 Another early issue of Vampirella; this has an odd cover featuring one by Boris Vallejo that is actually shrunken and surrounded by some art from Wally Wood's internal story, in black and white. An odd cover design that was never repeated by Warren. The frontis for this issue is "Vampi's Feary Tales: Lilith" by Jeff Jones (art) and Nicola Cuti (story).

First story is "The Testing!" by Tom Sutton (art) and Archie Goodwin (story). Vampi in this tale investigates Chaos by finding a book about them at a library. An evil witch there however and a corpse she brought back to life fight Vampi, who luckily is able to defeat them. At the same time, Conrad and Adam Van Helsing continue their pursuit of Vampirella and plan when they'll take her out.

Second up is "Monster Bait!" with art by Joe Wehrle and story by Don Glut. A girl is pursued by a dinosaur like creature in a cave. A hero arrives and saves her and heads to her kingdom with her. Only when he arrives he finds that it was actually a trap to bring him to a group of vampires, which kill him. The art on the female lead in this story is quite dreadful, as she looks rather manly.

Following is "Fate's Cold Finger!" by Ken Barr (art) and Doug Moench (story). A man, Frank, is spurned by a girl he likes, who goes with a much more successful man instead. Frank decides to kill himself, but is always unsuccessful at doing it. The girl meanwhile decides she dislikes the successful man since all he talks about is money, so she calls up Frank and says she'll go out with him. But as he leaves the house, an icicle falls on him, killing him!

Fourth is "The Curse" by Wally Wood (story & art). A man has no memory of his past and finds himself in a bizarre reptilian man like form. A beautiful woman, Zara, tells him that he's been transformed into this state by a sorceress that they need to kill using an enchanted sword. Our hero fights off many beasts and eventually the sorceress herself. It ends up however that Zara was the one who transformed him, as she was given eternal life and wanted to die, which could only be done by killing the sorceress. After her death our hero turns back into his true form, a lowly lizard.

Fifth is "Jack the Ripper Strikes Again" by Jerry Grandenetti (art) and Chris Fellner (story). This story features an investigation of a Jack the Ripper esque murderer. While many suspects are found and executed, they always end up being the wrong person. Eventually it ends up that the secretary to the detectives investigating the case is the killer.

Sixth is "The Boy Who Loved Trees!" by Barry Smith (art) and Barry Smith & Gardner Fox (story). The story features a boy who finds creatures that live in the woods, that only he can see. He heads there to party with them, and the neighborhood bully and friends follow and beat him up. The creatures from the woods save our hero however, and kill all the bullies.

Last story is "The Work Order For the Day" by Alac Justice (story & art). An odd tale told in the future, 1985, where humanity works based on orders from a large machine. A lightning storm destroys the machine, leading to some interesting revelations.
Posted by Quiddity at 4:13 PM

I have been trying to find 'the curse' by wally wood for literally a decade.

I could not recall the title, or the author's name, or where I had read it; only that the girl's name was 'Zara', the ending (man-into-lizard), and that I'd read it in some sort of alternative comic in a bookstore in the early seventies. I've been trying to google this up without success forever.

I cannot express my glee at actually hitting the right search terms to wind up at your blog.

Thank you, so much.