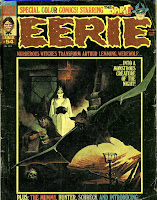 Another fairly good issue of Eerie, from 1954. The cover by Sanjulian features the Werewolf being turned into a bat, something which never happens in this issue. Thats twice in the last three issues that the Eerie cover has lied to us.
First up is "Stranger in a Village of the Insane!" by Jaime Brocal (art) and Steve Skeates (story), part 6 in the series "The Mummy Walks". The mummy, traveling on a train, is knocked off after a fight with a man aboard. He arrives in a village in Massachusetts filled with lunatics. In the middle of the town he comes across a large building where a demon lives, which he fights and defeats. The whole place comes crashing down, killing everyone but him. Unfortunately this would be the last segment of the Mummy for a while, and Jaime Brocal departed from Warren for good after this story.
Next is "To Cure This Curse!" by Martin Salvador (art) and Steve Skeates (story), part 6 in the series "Curse of the Werewolf". Al Milgrom, writer of the series, has departed, and Skeates takes over, quickly turning it into a series related to his Mummy series. Arthur Lemming visits a group of witches who offer to pass on his werewolf curse to a corpse. But instead they transfer is entire consciousness to a mummy! With the full moon arriving, he goes on a rampage, now as both a werewolf and a mummy, and kills all of them, after hearing of an amulet that can restore him to his real body.
The third part of the series "Hunter" follows, with art by Paul Neary and story by Rich Margopoulos. Hunter comes across a village of people being attacked by demons. At first he is quite arrogant, demanding food, and is nearly lynched by them. When the demons arrive he fights them, including a duel on winged creatures. One of the men manages to gun down all the demons, but unfortunately ends up killing his daughter along with them.
"The Christmas Spirit" is this issue's color feature, the first ever color story in Eerie. It is a preview of 'The Spirit', which joined the Warren line around this time. It is by of course the great Will Eisner. It features a boy who receives a Christmas gift from Santa Claus, the ability to celebrate Christmas.
"Bright Eyes" is next, part 2 in the series "Schreck". The art is by Vicente Alcazar and the story is by Doug Moench. Where we last left off, Schreck had found both his wife Paula and best friend Lee had turned monsters. The story has Schreck on the run from them and other white eyed 'werewolves' (who are more like zombies). He escapes, and encounters more of them, but is saved by mysterious benefactors. He awakens in an institution where he has been given an apparatus for his chopped off right hand, and meets them, led by an asian woman named Bright Eyes. However Schreck's own eyes have turned white, turning him into a monster, which is where the story ends.

Last is "The Evil That Men Do", the first part of a new series entitled Dr. Archaeus. The art is by Isidro Mones and the story is by Gerry Boudreau. Archaeus is a killer sentenced to death by hanging who somehow survives it. He plots revenge on the jury that condemned him and kills the first, the foreman of the jury, by tying him up in a bush and letting him be accidently shot by hunting friends when fake birds are put around him. The police arrive, led by Miles Sanford and start investigating.
Posted by Quiddity at 8:38 AM