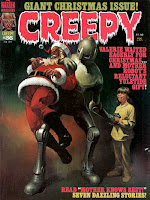 A special Christmas issue of Creepy, featuring a cover by Ken Kelly with a robot attacking Santa Claus.

Up first is "A Noggin at Mile End" by Leopold Sanchez (art) and Budd Lewis (story). It features one of Santa's elves helping a kindly natured freak by turning him into a real boy and taking him away with him.

Second is "Dick Swift and his Electric Power Ring!" with art by Carmine Infantino & Berni Wrightson and story by Bill Dubay. This story is about a sick boy and the superhero he is a fan of who has a magic electric ring. The boy eventually dies of his illness but gets to use the ring himself, at least in his mind, before he passes away. Probably the best story of the issue.

Third is "The Greatest Christmas of All" by Leo Duranona (art) and Roger McKenzie (story). It features a poor boy who is given Santa's magic sack, which he uses to give gifts to many. His mother dies of amnesia and his drunken father grabs the sack, only for a snake to come out and kill him. In the modern times the boy is now grown up and behaves like Santa, but dies when he decides to rest and think about the past.

The cover story is "Mother Knows Best" by Al Williamson (art) and Bruce Jones (story). This story is partially colored in red. A pair of kids celebrate Christmas with the robot that takes care of them. Santa arrives and whispers to them the truth, that they are on a spaceship and that the robots there went berserk. He's been thawed out of hibernation each Christmas to play Santa. One of the kids kills the robot, and they hope to head back to Earth, but they discover that the ship had crashed a while ago.

Like the previous story, "Bloodstone Christmas" is also partially colored in red. The art is by Carmine Infantino & John Severin, and the story is by Gerry Boudreau. It features a man in the old west who robs a Bank and kills its owner on Christmas Eve. He returns a few years later to find a woman he was with, but the sheriff kills him, cuts off his head, and gives it to the wife of the Banker as a Christmas gift.

Next is "Season's Grievings" by Gonzalo Mayo (art) and Bruce Jones (story). A woman whose husband was accused of murdering his prior wife faces her psychotic kid on Christmas Eve and is forced to kill him. At the end we see how things really happened, that she was crazy, she was the one accused of being a murderer, and that she killed his innocent son. The husband kills her then himself.

Last is "A Gift for Mama" by Luis Bermejo (art) and Roger McKenzie (story), about a pair of boys whose father passed away in the mines and whose mother was essentially made comatose by her new husband, who they killed with an axe. On Christmas their dead father comes back from the grave and takes her away with him.

I usually was not a big fan of the Christmas issues as the stories generally were not that scary, but for the most part this is a fairly good issue.
Posted by Quiddity at 7:33 PM