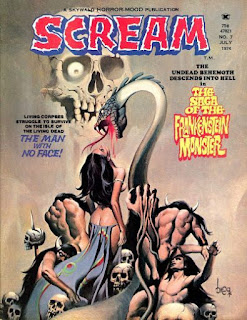 I am back again after a brief absence due to some travel and being sick. Today' I'm covering Scream #7. Manuel Brea Rodriguez provides the cover for this issue, cover dated July 1974.

First is "Horror Fragments: The Headless Horseman" by Al Hewetson (story) and Ferran Sostres (art). This one pager features the titular Headless Horseman, who came across Ichabod Crane in the famous tale.

Next is "The Man with No Face" by Al Hewetson (story, credited to Howie Anderson) and Jose Cardona (art). Our protagonist, Al Anderson, is a sailor on board a ship that is destroyed by a storm. Al travels on a raft, and sees mirages, such as a town that doesn't exist, but eventually makes his way to an island. He lives there and even makes a home for himself. One day he comes across a beautiful woman who doesn't speak. She spends the day with him, but when he wakes up that night he finds her missing. He follows her footsteps to a nearby volcano where he finds many more beautiful women. The one he saw earlier tries to pull him away from them, but he stays with the others. The woman leaves them comes back with 2 of Al's shipmates, who also made their way to this island, but now have deformed bodies. Suddenly the women grab a hold of Al and start biting at him. It turns out they are demons. Al and his other shipmates depart the island on their raft, hoping to return to civilization, although deformed. This is a pretty good way to start off the issue and Cardona does a good job drawing some beautiful women, reminding me again of Jose Gonzalez's style. The story reminds me somewhat of "Mates" from Warren's Creepy #64 where a man becomes deformed after sleeping with a number of alien women.

Third is the latest Nosferatu story, "Satan's Third Reich" by Al Hewetson (story) and Zesar Lopez (art). Nosferatu asks Horsch Heindrich, wearing a goat's mask, to tell his tale. A Nazi soldier during World War II, Heindrich watches as his superiors commit torture and grows fascinated by it. He desires to do it himself and gets together with like minded people after the war is over, forming a coven. Heindrich declares himself leader of the coven, with little reason to back it up, and while they are able to steal many things from churches around Berlin, one of their own gets arrested and gives it all up. Heindrich's coven is forced to go on the run to the mountains. His underlings demand to make a sacrifice, and try to kidnap a young woman, only to be scared off. Heindrich's underlings has had enough of his bad leadership, and makes him their sacrifice! As the story ends Heindrich reveals the gaping hole in his abdomen from when he was sacrificed. The atmosphere of this series continues to be strong, with great art from Zesar, although we are starting to hit a point where the stories are getting a bit repetitive, or at least the endings are. As each tale ends the teller takes off his mask and hood, revealing a rotted, eaten or otherwise deformed body. I think I'd be a bit less kind if the art wasn't so good.

Fourth is the Edgar Allen Poe adaption, "Berenice" with adaption by Al Hewetson and art by Ricardo Villamonte. Our protagonist recalls playing with the titular Berenice when they were children. While she was graceful and full of energy, he was sickly and withdrawn. Eventually they grow up and Berenice falls ill from a fatal disease. Despite this our protagonist falls in love with her and they marry. Berenice grows sickly and emaciated and our protagonist starts obsessing over her teeth. Eventually, she dies and is buried. Our protagonist cannot stop thinking of her. Eventually he is come upon, being told that Berenice's grave was tampered with. Our protagonist is discovered to have dirty clothes, and bloody fingers. He discovers a box, and upon opening it finds out that he dug up Berenice and pulled out all of her teeth! A rather memorable Poe story, which I recall being adapted several times by Warren. I don't recall in their adaptions Berenice becoming as ill looking as she does in this adaption, which makes it all the scarier.

Next is The Saga of the Frankenstein Monster with "The Descent into Hell" by Al Hewetson (story) and Cesar Lopez (art). I'm rather surprised to see the Frankenstein series start up again after they so recently ended it, although this appears like a complete redo, with no connection to the prior stories. Frankenstein's Monster narrates the tale of his creation. Dr. Frankenstein seeked to create a perfect being, and is able to do so; yet when his creation starts moving about and accidentally destroying some equipment, he gets into a rage and chops up his creation repeatedly in the head with an ax. Realizing the mistake he has made, Dr. Frankenstein resurrects his creation, but he is now hideous, so Dr. Frankenstein seeks to kill him again. The monster instead shoves him aside and heads outside, scaring a man along the way. This was a decent enough story, with a slight change in how the Frankenstein story is typically told (with Frankenstein creating him twice).

We wrap up with the second story in the Saga of the Victims series, "I Am Horror" by Al Hewetson (story) and Jesus Suso Rego (art). After a short recap, we continue where we left off, with Anne and Josey confronted by a man who looks like all his skin has been torn off. The man starts babbling on about being horror, asking if they are dreaming and other nonsensical stuff for a few pages. They depart and the man, serving his purpose, dissolves. Anne and Josey head outside, where they find things have returned to normal. A man named S. Paladin shows up and says he can explain, leading them into his car. Once inside he claims to be their tormentor and brings them to his castle in the small country of Cordova. He claims to be 400 years old and leads them to his basement, where he lays in a coffin. Anne and Josey try to escape, fleeing from some snakes and find themselves in a room that suddenly starts shrinking. By shorting out some circuits they are able to escape, finding themselves in a room with 3 female vampires. Paladin appears, and starts pulling off his skin, revealing him to be a robot! He still seems to have the weakness of a vampire though and is destroyed when exposed to sunlight. Anne and Josey flee outside, only to be confronted by a winged dinosaur! Here the story ends. This series continues to be total craziness, with our 2 heroines getting in nightmarish situations one after another. Suso continues to provide some really strong artwork.