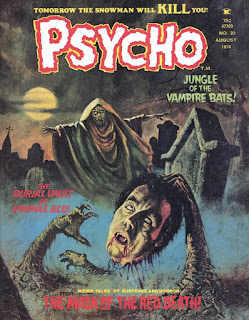 This issue of Psycho features a cover by Salvador Faba, and is cover dated Augsut 1974.

First is "The Dead and the Superdead" by Al Hewetson (story) and Jose Cardona (art). This story takes place in a future where the Americas have reverted back to prairies and jungles, and Europe is the center of civilization. Other continents/countries are overrun by Shoggoths, mutant apes and other monsters. We focus on the President of Europe who departs his home, and travels with a homeless orphan girl he found on the street. He speaks of how acts of violence started occurring and aliens arrived, with no bodies, so their minds started occupying human bodies. This results in mass deaths, war and the like. For several pages we see how society further collapsed. The President eventually shows the girl a button he can push which will set off nukes and likely destroy the world. The President is stabbed to death by a maniac soon after and as the story ends we see the girl about to push the button. This story goes a bit all over the place, but Cardona's art is good. Usually he reminds me of Jose Gonzales, but he has several images here reminding me of Rafael Auraleon.

Second is "The Burial Vault of Primal Eld!!!" by Ed Fedory (story) and Antonio Borrell (art). This story's style is extremely confusing, switching back and forth between a pair of soldiers in two storylines; I think the intent is they are the same soldiers? In the first storyline a couple of soldiers fighting in Southeast Asia come across a small town and order some peasants to dig them a trench. When complete, they kill all the peasants. In the second storyline, what I am presuming to be the same soldiers fall into a pit, which they discover to be a tomb. They open a door in the tomb where a giant hand grars them, dragging them to hell. Fedory's poor storytelling reminds me of how confusing his early Skywald stories were.

Third is an Edgar Allen Poe adaption, "The Masque of the Red Death" with adaption by Al Hewetson and art by Ricardo Villamonte. The plague ravishes the countryside. Yet Prince Prospero summons his friends to his castle, where they keep away from everyone and are happy in their seclusion. To get over the boredom, Prospero decides to have a great ball, where everyone wears masks. And yet during the party a mysterious figure enters, with the mask of one diseased and rotted from the plague. Prospero tries to unmask him, but dies upon touching him, having contracted the plague from him. The other party goers throw themselves at him and all end up perishing from the plague. A decent adaption of a story I recall being adapted several times by Warren as well.

Fourth is "Tomorrow the Snowman Will Kill You!" by Augustine Funnell (story) and Luis Collado (art). Two men, Todd Williams and Ben Mathenson have traveled into the wintery wastelands hoping to kill a Yeti. That night a trio of Yeti come upon their tent, but not knowing what it is, do nothing. The next morning they see the footprints and head out, eventually coming across the three Yeti as they are about to turn in for the night. However as they aim to shoot the Yetis, they find they are unable to. They instead, due to the influence of the Yetis, turn their guns on each other and kill each other. As the story ends the narrator reveals that the Yeti are an evolved form of man, what we will eventually become. A pretty decent story although I found it funny how much our two protagonists would go on about how killing Yeti would cause women to be attracted to them. Most panels in this story are small, causing Collado's art to not be as strong as I am used to it being.

Fifth is "Requiem for a Human Being" by Al Hewetson (story) and Antonio Borrell (art). In the jungle of South America, a man named Hawkins leads a rich woman and her two children. She is seeking to find the city of Maa-r, which her husband had searched for a year ago, never returning. Hawkins is killed by a snake, and the tribesmen he hired leave to return to safety, with the woman refusing to go along with them. She and her children eventually find Maa-r, seeing many monstrous bat creatures flying above it. One of the bat creatures fights off the others, and the woman heads to the city, reading a book that says how they will find peace and happiness here, but will never leave. In the final panel we see that she and her children have become bat creatures as well and are reunited with their husband/father. The final panel of this story hints at a sequel; we'll have to wait and see if we get it.

Sixth is the latest in the Gargoyles series, "The Freaks" by Al Hewetson (story) and Maelo Cintron (art). Edward sits in jail, awaiting a hearing for his crime of destroying a lion statue. His wife Mina and son Andrew come to visit, telling him they've found a hotel to stay in. While eating out, Mina is approached by a reporter, Paul Hawkins, who has been interested in Edward's story and thinks by writing an autobiography, he can tell his story to the public. Edward agrees and Paul records him as he tells his story so he can write it. When Edward is told by a guard that his wife is not at the hotel, he freaks out, thinking Satan is behind it and breaks out, only to discover that she got a job at a daycare and was there. Edward turns himself back in and returns to jail. The Gargoyle series continues to bore me. Edward is his own worst enemy, getting violent over something that is revealed to not be a big deal at all. Perhaps he should be in jail if he's going to be this out of control. The character Paul is modeled after author Al Hewetson, and an unnamed man he is sitting with is modeled after artist Maelo Cintron.