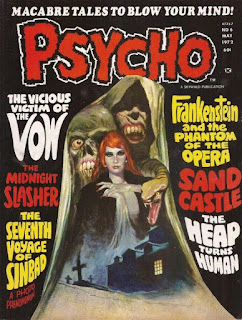 Vicente Segrelles provides the cover for this issue of Psycho, cover dated May 1972. That's a 6 month gap since the prior Skywald issue! From what I've read Skywald had a color comics line that got into a lot of financial trouble around the end of 1971, causing a massive delay in the black and white horror magazines.

This issue is notable for featuring the Skywald premiere of Pablo Marcos, the Peruvian artist who would become quite the dominant artist for the company. By my count, only one other artist, Ricardo Villamonte, draws more stories for them. Marcos also provides a significant number of one page frontispieces/pin-ups as well. He starts off with a bang, having 3 stories here as well as the frontispiece. Marcos did a small amount of work at Warren (including a 2 part Vampirella story), and I can't recall being the biggest fan of him there. Not because he's a bad artist (he's a good one), but he just couldn't live up to the quality of the Spanish and Filipino artists that were dominating the magazines at the time.

We kick off with the one page "Psycho's Supernatural Series: Abrasax", drawn by Pablo Marcos. The Abrasax is a type of chimera, featuring a rooster's head, a humanoid body and the feet of a dragon! He also wields a whip, making it quite the odd sight!

First is "The Vow!" by Pat Boyette (story & art). An aristocrat named Aaron becomes a single father when his wife dies from the plague. The plague ravishing the countryside and the aristocrats being slayed by the common folk, he flees, eventually finding work as an overseer of the disposal of the bodies of those who died from the plague. Aaron soon realizes with horror that his daughter Cassandra thinks dead bodies are real and her friends! Time passes, and Cassandra starts a relationship with a local ruffian named Andrew who is rumored to be the paramour of the Empress. Aaron is scared of what will happen if she finds out about the affair, but Cassandra says she'd rather die than be without him. Aaron comes to a good solution; he rats out Andre to the Emperor, who has Andrew killed, then due to his job collects his body and provides Cassandra his body! Its always a joy to read a Pat Boyette horror story, both this and his story for the most recent Nightmare issue were quite strong. Alas, with just 2 stories done, Boyette will depart Skywald and not do any further work for them.

Second is "The Midnight Slasher" by Doug Moench (story) and Pablo Marcos (art). A killer known as the Midnight Slasher haunts the streets, stabbing to death any innocent bystander that comes upon him. A maid, Miss Watts, tends to a young woman she serves, only for her to be the next victim! Watts talks to the local constable, who has raised suspicion for himself due to how quickly he makes it to the murder scenes. He comes across Miss Watts later that night by a bell tower, where Watts is revealed to by the slasher, only for her to be crushed by the bell! This story packs a double twist in the end, with it not being enough for Watts to be revealed as the Slasher (which was pretty predictable anyway).

Next is "Sleep" by Steve Stern (story) and Jeff Jones (art). As mentioned in my coverage for Nightmare #6, Stern may not have actually been real. This is Jones' first story for Skywald, although not his first work, having done the cover for the previous Nightmare issue. This story takes place in space on a space pod where a Doctor Zim hypnotizes his assistant, Robinson. He then has Robinson speak of what he senses an hour from now (at which point Zim expects him to have been dead from an injury) so he can find out about life after death. As the hour approaches, Zim realizes the horrible truth though, that they will both be dead as their space pod has approached the sun! Jones' art is quite good here, and this was a fairly good sci-fi story.

Fourth is The Heap in "Dark Victory" by Ross Andru (story) and Ross Andru/Pablo Marcos (art). Its disappointing to see Mike Esposito, who had been on all the previous Heap stories, no longer contributing. Where we last left off, the Heap was in a cave with some mutated humans fighting the sheriff and one of his men, only for the Heap's hands to start turning back human! The Heap continues to revert back to more of a human, causing the mutants to turn on him. Out of nowhere, a mutated giant spider appears and is also added to the fray but is able to be fought off by a beam holding up the ceiling. this causes the ceiling to collapse. The Heap, now fully back to his human form, Jim, leaves the cave with the Sheriff, and is able to escape from him due to his head injury. Jim returns to see his friend Monty, revealing that the antidote he provided has worked. As Monty leaves, his daughter arrives, who Jim starts kissing, only for him to turn back into the Heap partway through! Horrified, he breaks out of there and flees back into the woods, cursing why this had to happen to him. This series continues to be fairly fun, and we had a pretty great ending to this part.

Next is "Of a Sudden is Thy Death!" by Gus St. Anthony (story & art). This is a very quick story at a mere 2 pages. A young woman named Margo finds herself dead, but completely rejects it. Satan reveals that it is true, she isn't really dead, but she had been bitten by a vampire and now has become one herself. A very predictable ending to this rather pointless story.

Sixth is Frankenstein in "The Phantom of the Opera" by Tom Sutton (story and art). This story is unfortunately the last contribution we will get from Tom Sutton to Skywald. He was likely pushed out by the soon dominance we'll get from the Selecciones Illustrada artists, although was able to work at Warren for a couple more years despite the S.I. artists also dominating there. In any case this finale from him is quite a lot of fun! We continue where we left off the last time, with the Frankenstein monster and Lilith in a dead end in the sewers, the octopus-like Le Suub attacking them. Suddenly the wall behind them collapses, causing them to fall into a pit where they come upon the Phantom of the Opera! The Phantom explains how his pipe organ also permits the transmitting and receiving of inanimate objects, but this has caused issues with living specimens. Suddenly Dr. Pretorius arrives, with Henry Frankenstein's head, and they get to work on trying to transmit his brain into the monster's body! Lilith interferes though, causing the monster to become even more powerful than ever, causing a massive explosion! The monster is brought through time due to the power of the pipe organ, where the story ends. With Sutton's departure I believe this is the last story for a while in the Frankenstein series, although it does return later on.

Our last story for this issue is "Sand Castles" by Ed Fedory (story) and Pablo Marcos (art). Fedory makes his premiere here and would become one of the mainstay writers at Skywald when Al Hewetson becomes editor. For a short time he had also been contributing stories to Warren. A pilot is transporting two criminals, Benny and Tony, to Mexico, when their plane's engine explodes, forcing them down to the desert sands below. Thus starts a long journey to civilization. With their water running out, the pilot kills Tony, then fills the canteens with his blood. So it probably shouldn't come as that big a surprise pages later when the pilot reveals to Benny that he is a vampire! He kills Benny, filling his canteen with his blood but the days continue to pass and the blood congeals, becoming undrinkable. The pilot eventually finds a castle however and makes his way inside, finding Benny and Tony's ghosts waiting and they throw him down a chasm into hell. Yet again a Skywald story has a rather confusing ending though as our last panel shows their destroyed plane, with several skeletons there making one wonder if any of what happened was real. This was a fairly good story (although a bit too drawn out) and I don't mind them mixing things up at the end, I just wish it was more definitive on what was real.

The issue wraps up with the one page "Werewolf Pin-Up" by Bill Everett.
Posted by Quiddity at 5:44 PM